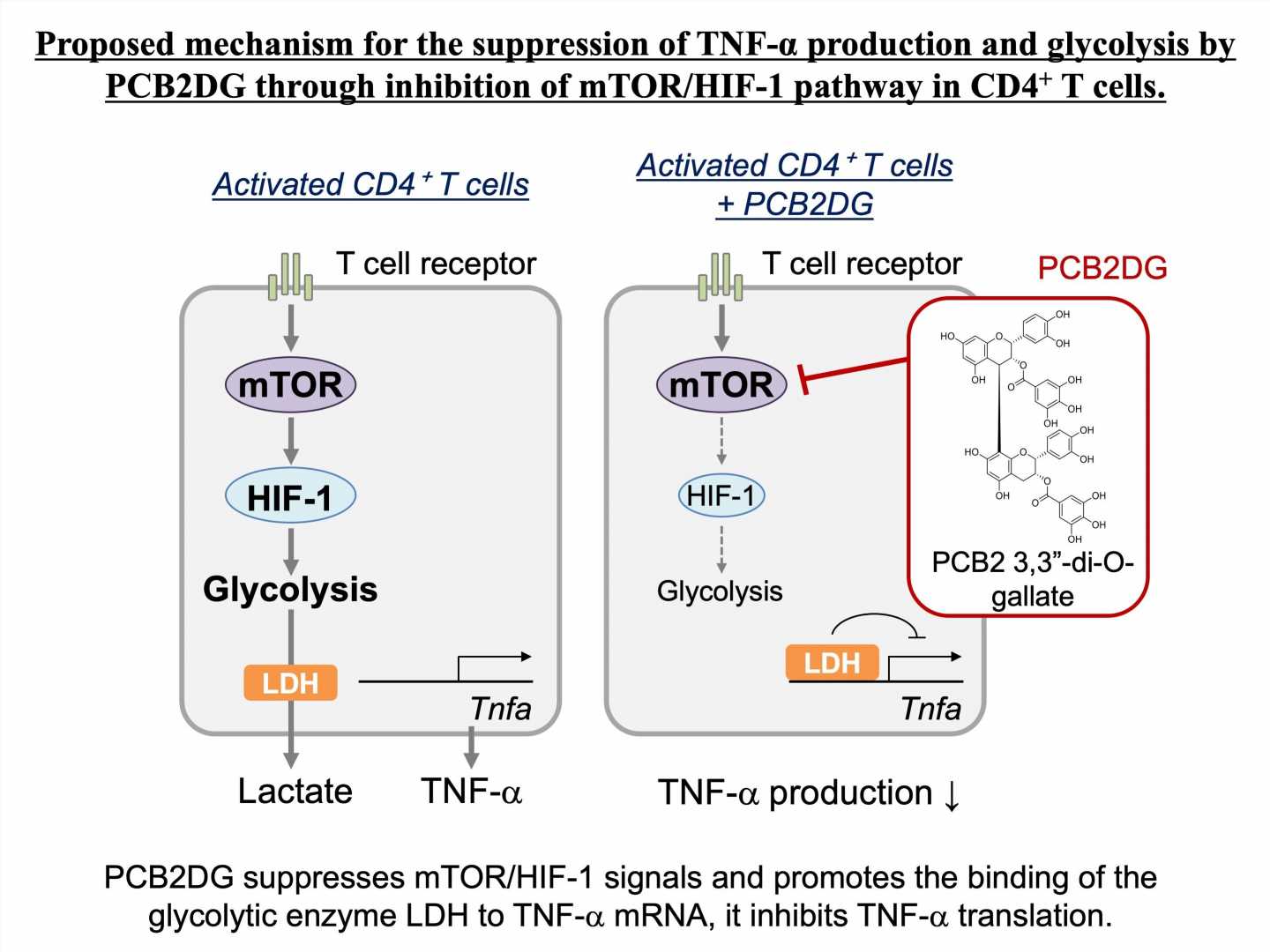 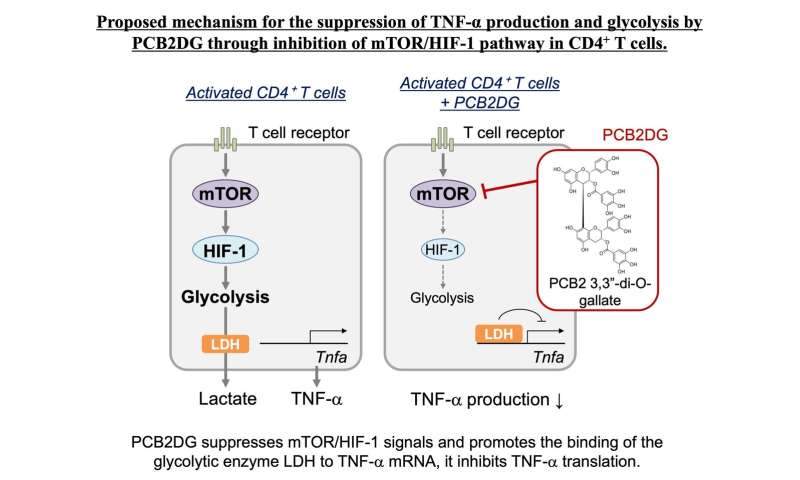 Known as the French paradox, a low incidence of coronary heart disease despite substantial intake of saturated fats is thought to be due to a diet rich in polyphenols. Polyphenols are abundant in plant based foods such as fruits and vegetables. Procyanidins are polyphenols with antioxidant, anti-obesity and anti-inflammatory properties. In this study, PCB2DG, (procyanidin B2 3,3″-di-O-gallate) was examined to see how it inhibits the cytokine production in T cells. Specifically, to understand the mechanism underlying the regulation of tumor necrosis factor (TNF)-α.

The Tanaka Food Immunology Laboratory at Shinshu University has long studied the polyphenol PCB2 and its immunoregulatory function. PCB2DG is a dimer of epicatechin, and is structurally different from other polyphenols which makes it an interesting subject of study. Polyphenols have properties that decrease inflammation and have anti-oxidation properties. Autoimmune diseases such as colitis and rheumatoid arthritis are said to be alleviated by decreasing TNF-α production and signaling because TNF-α is a protein that causes inflammation in the body.

Immune functions and energy metabolism are closely related. Abnormalities found in the energy metabolism of immune cells are known to be related to the onset of immune diseases. This is why research continues into the cell metabolism targeted immune suppressant drugs. Polyphenols have been known to have immunosuppressant activities but their cell metabolism was not known. This study succeeded in showing for the first time that PCB2DG, a type of polyphenol supresses cytokine production by inhibiting glycolysis and the mTOR/HIF-1 pathway. Glycolysis is the process of breaking glucose down for the body to use as fuel.

These results suggest that PCB2DG regulates TNF-α production by inhibiting glycolytic activity via the mTOR/HIF-1 pathway. This study is the first to report the mechanism by which PCB2DG, a dimeric polyphenol including a gallate group, controls cytokine production. Based on their findings, molecular studies of cellular molecules which interact with PCB2DG are needed to elucidate further mechanisms. Moreover, studies on the effects of PCB2DG in terms of amelioration of TNF-α-mediated pathology using a mouse model would be informative. In the future, PCB2DG may become available as a therapeutic for the treatment and prevention of TNF-α-mediated autoimmune diseases.

Interestingly, a compound with two gallate groups added to PCB2 (PCB2DG) was found to suppress immune cell activation. In addition, the group found that PCB2DG suppresses the production of cytokines involved in the inflammatory response. However, since the mechanism of PCB2DG suppression was unknown, the group decided to tackle this issue.

In order to evaluate the effect of PCB2DG on cytokine production, protein level and gene level of cytokine were analyzed. As a result, although suppression at the protein level was confirmed by the addition of PCB2DG, suppression at the gene level was not confirmed. Usually, cytokines are known to show the same changes at the protein level and at the gene level, so the group thought that there were some deficiencies in the experiment, and repeated experiments were conducted. However, no matter how many times the experiment was carried out, the protein decreased and the gene remained unchanged. Therefore, by changing the approach, the group hypothesized that PCB2DG regulates post-transcriptional protein expression rather than regulating the cytokine gene, and proceeded with verification. The research group eventually were able to prove that this hypothesis was correct, though it was very difficult to get there.