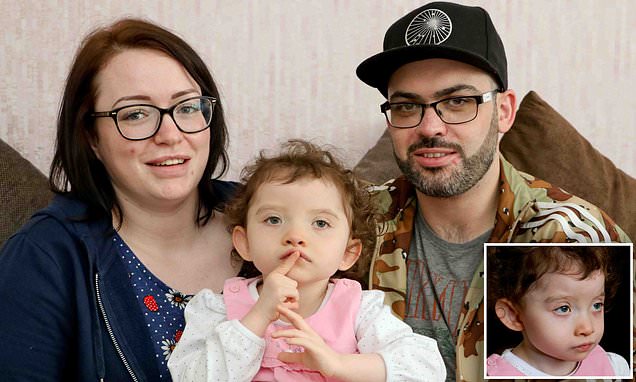 Girl, three, who is the ‘ONLY person in the world’ to suffer from a disorder that has left her unable to eat, talk or walk is still ‘infectiously happy’

A toddler has a chromosome disorder that is so rare she is thought to be the only sufferer in the world.

Nyara Bone’s mother Heather Smith, 30, claims she was told she was being an ‘over-reactive first-time parent’ when she took her newborn to the GP after she projectile vomited.

After 16 months of doctor visits, Miss Smith and Nyara’s father Stefan Bone, also 30, were finally told she has a set of DNA deletions and duplications on her thirteenth chromosome.

The unnamed disorder has left the three-year-old with 24 health complications, including an inability to walk, talk or eat, as well as incontinence, behavioural problems and distinct facial features.

Due to the condition being so rare, doctors are unable to predict what her future may look like.

For now, the youngster attends a specialist nursery in Ayr, Scotland, and is an ‘infectiously happy girl’ despite the daily pain she suffers. 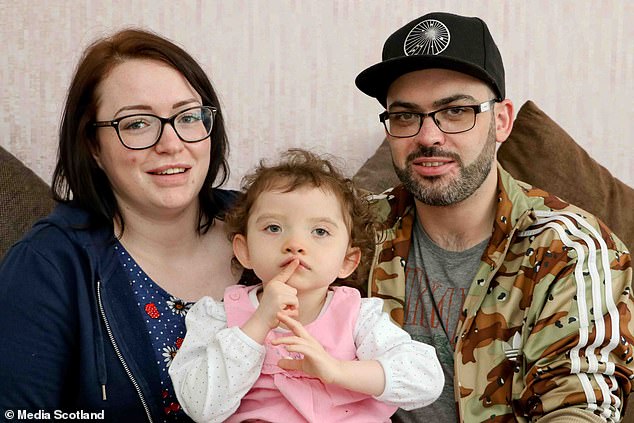 Nyara Bone has a chromosome disorder that is so rare she is thought to be the only sufferer in the world. The three-year-old is pictured with her parents Heather Smith and Stefan Bone 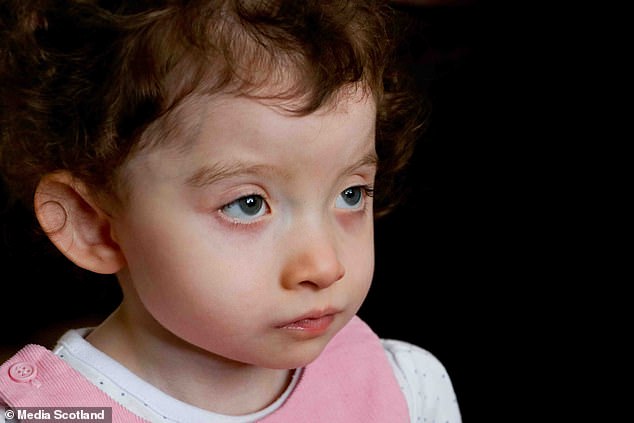 Nyara has a set of DNA deletions and duplications on her thirteenth chromosome. This has left her with 24 health complications, including an inability to walk, talk or eat

Speaking of her daughter’s condition, Miss Smith said: ‘I can always remember going to the doctor and asking for help when Nyara was three months old.

‘She was very clearly suffering in some sort of pain and projectile vomiting far too often for a newborn.

‘I was told I was being, “an over reactive first-time mother” and “just put her up on your shoulder and hit the wind out of her”.’

A chromosome disorder occurs when there is a change in the number or structure of chromosomes.

In each cell, DNA is packaged into thread-like structures called chromosomes.

Humans have 46 chromosomes, with each cell normally containing 23 pairs.

The 23rd pair is the sex chromosomes, which differ between men and women.

Some chromosomal abnormalities are harmless, however, others lead to disease.

Half of all miscarriages are said to be due to a chromosomal abnormality.

The most severe disorders are caused by the loss or gain of a whole chromosome.

These are usually fatal, with hundreds or even thousands of genes being affected.

Down’s Syndrome is an example of a non-fatal condition that occurs when a person has an extra chromosome in their 21st pair.

If the chromosome affected is small or contains relatively few genes, the person’s developed may be stunted.

Structural abnormalities occur when large sections of DNA are missing or added to a chromosome.

Examples include Prader-Willi syndrome, which comes about when there is a deletion on chromosome 15.

This results in sufferers having an insatiable appetite.

Chromosomal abnormalities occur when there is an error in cell division.

This tends to take place in the egg or sperm, but can happen during embryo development or be inherited from a parent.

The risk increases as a mother gets older.

At 16 months old, Nyara was finally diagnosed with a chromosome disorder.

‘This diagnosis is so rare she is the only person in the world with her specific deletions and duplications,’ Miss Smith said.

Mr Bone added: ‘Other kids will have their 13q [chromosome] affected but she’s got five duplications and one deletion, so there’s nobody else with that.

‘Every case is so individual you’re never really sure what they might go through at any point in their life.’

Nyara is said to have been born without a corpus callosum, which is the bridge that connects the left and right side of the brain.

This has caused her to lack co-ordination and means she may always be incontinent, the Daily Record reported.

Nyara also suffers from low muscle tone. This led to her breaking and dislocating her hip during birth, which went undetected until a scan just two months ago.

The youngster also nearly died after doctors administered 10 times more morphine than they should have.

This occurred after she underwent major surgery for a twisted bowel in December 2017.

She returned home but was in such severe pain she was taken to University Hospital Crosshouse two days later.

‘Instead of 0.9mls [of morphine] they gave her 9mls,’ Miss Smith said.

‘This was checked and signed for by three nurses and one doctor.

‘I can totally understand that errors happen, we’re human and we make errors. But not to that extent and not for a wee person that size.

‘It was two hours sitting by her bedside thinking, “Is she going to pull through?”‘

Nyara survived and just ‘gets on with it’ despite the daily pain she suffers.

The youngster, who eats through a tube, even attends nursery, despite finishing each day exhausted.

‘She is getting so much better with sensory and messy play,’ Miss Smith said. ‘I can’t believe how far she has come in such a short time.

‘Before she wouldn’t put her hands on anything dirty or touch anything wet.’

Nyara also amazes her parents every day with her resilience.

‘She’s the most content and happy wee thing,’ Miss Smith said. ‘I have honestly never came across such a determined little person.

‘She has proven she is capable of anything and is adamant to do things like anyone else.’ 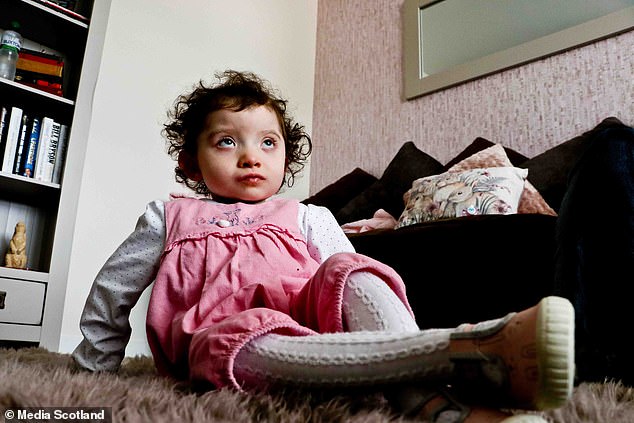 The parents are speaking out to encourage parents to trust their instincts when it comes to their children’s health.

‘The main thing is, new mummies and daddies, please go with your gut,’ Miss Smith said. ‘No one knows your baby like you do; don’t take no for an answer.’

They also want to raise awareness of chromosome conditions. Miss Smith has a Facebook blog, Nyara’s Story, where she talks about her daughter’s disorder.

‘We’re trying to get people more educated on her condition and not be scared to ask questions,’ Miss Smith said.

‘It doesn’t matter if you think it’s a silly question or we might take offence to it, just ask.’

The family has been supported by the rare chromosome and gene disorder charity Unique.

‘Without Unique we wouldn’t know anything, or be as knowledgeable or comfortable in the care of our daughter Nyara,’ Mr Bone said. ‘For all we know we could still be trying to diagnose her condition.

‘I praise Unique as one the main reasons she was able to become the infectiously happy girl she is today.’

The Carrick Bar and Grill in Maybole will hold a fundraising day for Nyara on September 14. Funds will go towards the youngster’s medical costs, a ‘special family treat’ or medical research.

A spokesperson from NHS Ayrshire and Arran, which runs University Hospital Crosshouse, said: ‘NHS Ayrshire & Arran is not able to provide comment on individual cases due to patient confidentiality

‘We do not underestimate the impact this experience had on the family and gave a full apology at the time.

‘We also explained what actions have been taken to prevent a recurrence.’