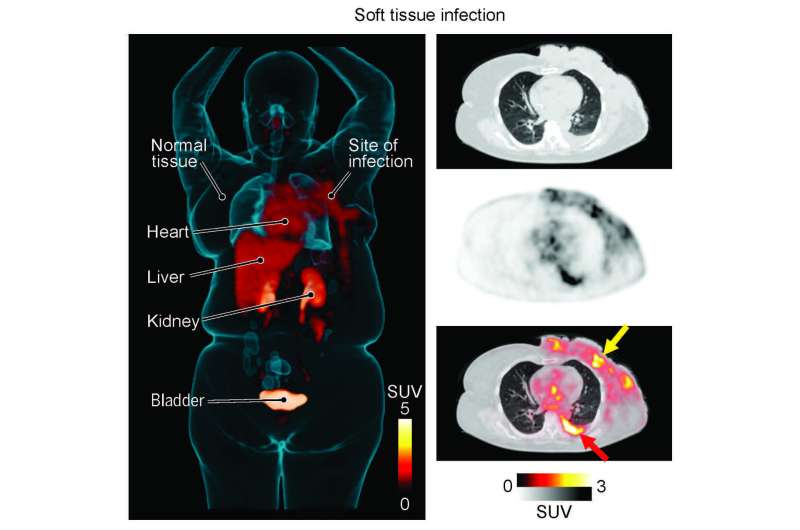 In the movie Mary Poppins, the title character sings that “a spoonful of sugar helps the medicine go down.” Now, Johns Hopkins Medicine researchers have shown how a radioactive sugar—combined with a widely used imaging technology—could soon help physicians make the medicine work better by enabling them to rapidly detect and monitor infections from the largest group of bacterial pathogens threatening humans.

The new imaging tool uses positron emission tomography—commonly known as a PET scan—to noninvasively find and track dangerous infections from the microbial family Enterobacterales, a group that includes the Escherichia coli strains that cause food poisoning; Klebsiella pneumoniae, a cause of pneumonia and a severe threat to patients weakened from COVID-19; and Yersinia pestis, the scourge behind the “Black Death” pandemic of plague in the 14th century that wiped out 75% of the world’s population.

Enterobacterales bacteria also have been tagged by the U.S. Centers for Disease Control and Prevention as “urgent and serious antibiotic resistance threats” because of their frequent mutations to drug-resistant strains.

The new diagnostic tool is described in a paper published April 14, 2021, in Science Translational Medicine. It emerged from a creative combination of existing PET scan technology—a sophisticated 3D visualization system for imaging diseases such as cancer—with sorbitol, a molecule used in making sugar-free foods. The method capitalizes on the fondness for sorbitol of Gram-negative bacteria (a classification of bacteria based on their resistance to a specific staining procedure) such as Enterobacterales and the fact that other microorganisms, cancers and human cells do not absorb it.

“We converted an already available radioactive imaging tracer into an isotope-tagged sorbitol molecule that would light up clusters of Gram-negative bacteria within the body during a PET scan,” says study senior author Sanjay Jain, M.D., professor of pediatrics, and radiology and radiological medicine at the Johns Hopkins University School of Medicine; and professor of international health at the Johns Hopkins Bloomberg School of Public Health.

In a previous study, the researchers demonstrated that PET scans using their novel sugar tracer—chemically known as 2-deoxy-2 [18F] fluoro-D-sorbitol (18F-FDS)—successfully detected Enterobacterales infections in mice. This time, the team conducted a clinical study to evaluate the safety and effectiveness of the 18F-FDS PET technique. The work was done in collaboration with scientists from the Fundación Cardiovascular de Colombia-Hospital Internacional de Colombia (Piedecuesta, Colombia).

The tracer was well tolerated by all of the participants and showed no adverse effects.

Because the 18F-FDS PET imaging technique has shown that it can immediately detect the presence of Enterobacterales bacteria deep inside the body—compared with laboratory tests which can take two to three days to confirm an infection—the researchers feel that their method can play an important role in optimizing antibiotic treatments and preventing the rise of dangerous antibiotic-resistant bacteria strains.

“Using broad-spectrum antibiotics to treat a suspected bacterial infection before an infection is confirmed is sometimes like firing a cannonball to kill a fly,” says study lead author Alvaro Ordonez, M.D., assistant professor of pediatrics at the Johns Hopkins University School of Medicine. “While such treatment is clinically justified in patients with serious infections of unknown origin, it can promote bacterial resistance to the drugs. Knowing quickly which organism is causing the problem can enable clinicians to target the antibiotic best suited for that bacteria, and that is where our new imaging system could make a difference.”

The researchers also say that the 18F-FDS PET imaging technique also can be used to monitor the effectiveness of antibiotic therapy, as they showed for 13 of their clinical trial participants with Enterobacterales infections.

“We scanned the patients before and after their course of treatment,” says Ordonez. “In those who did not respond well because of the presence of drug-resistant bacteria, the 18F-FDS signal remained high with the final scans. On the contrary, it decreased in those patients whose infections were significantly treated.”