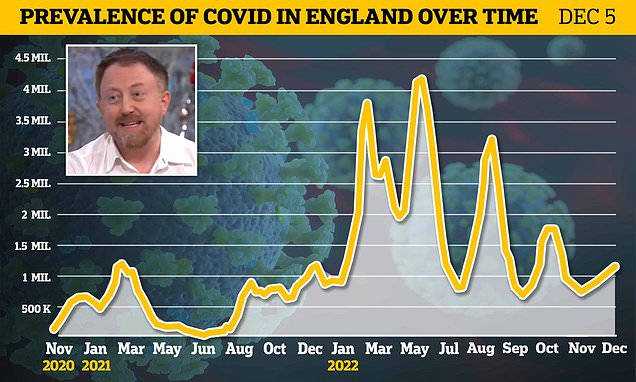 A rise in Covid hospitalisations has come at the worst possible time, experts have warned.

The NHS is already being crippled by record backlogs, unprecedented strikes and winter pressures, giving it little room to handle other issues.

Yet virus admissions have risen by a third in a week, according to official data that suggests a winter wave has just began. 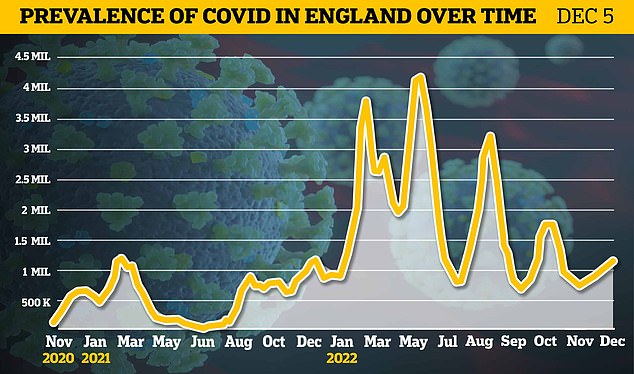 Office for National Statistics ( ONS ) figures today showed there were 1.1million infected with the virus on any given day in the week up to December 5. It was the first time cases breached 1million since November 1 and was up 16 per cent on the 941,700 recorded the week before

He said: ‘Hospitals will treat patients differently so as not to infect vulnerable people who don’t have it.

‘And most people in hospital are vulnerable, that’s why they’re there.

‘So it just creates extra pressure on the health service.’

Dr Clarke said that staff will follow Covid protocols but having to manage this on top of routine winter pressures ‘makes their life even more difficult’. 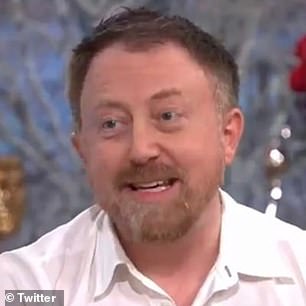 Dr Simon Clarke (pictured), an associate professor in cellular microbiology at the University of Reading, warned of how this could impact an already struggling NHS

He added: ‘Winter is traditionally difficult for the NHS, we know that, that’s nothing new and it’s just going to make it worse and exacerbate any problems.’

Dr Clarke also warned that as flu cases are usually higher in January and February, the pressures on the NHS could possibly get worse still.

This was up from 724 the week before.

Covid hospital admission data includes patients who went in for different ailments and happened to test positive for the virus.

But patients with the virus still have to be isolated in hospitals, piling more pressure on struggling departments that are especially short-staffed on strike days.

Meanwhile, surveillance data shows more than a million people were infected on any given day in England last week.

It marked the first time cases breached 1million since the start of November, when the virus’s resurgence started to fizzle out. 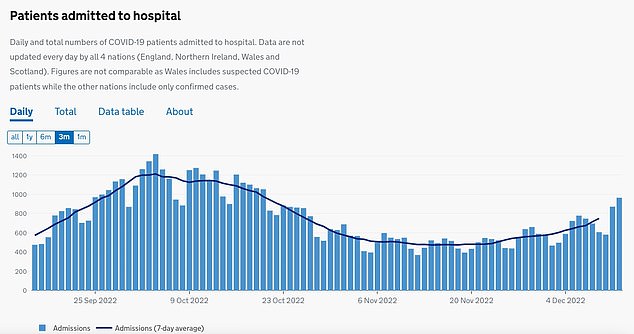 UK Health Security Agency (UKHSA) show 965 coronavirus patients were admitted on Monday, up from 724 the week before 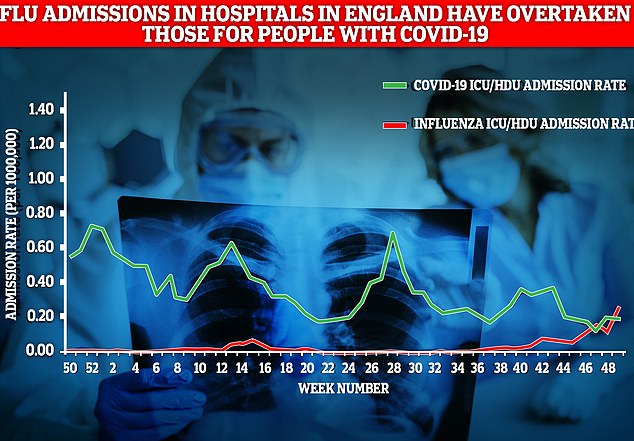 In reality, it means around one in 50 people were infected.

Cumbria was the hotspot, according to the Office for National Statistics.

While Covid continues to grow, experts are increasingly even more worried about spiralling flu cases.

For the first time since the pandemic began people are being admitted to hospital with influenza at a higher rate than with Covid, although both of these are rising.

There have been suggestions that if the trend continues the UK could see its worst flu outbreak since the winter of 2017/18, which killed 30,000 people.

It could not have come at a worse time for the NHS, which faces a record backlog – in October this year more than seven million people were known to be waiting for treatment — and is also dealing with a Strep A outbreak.

Experts are warning that increased mixing indoors due to the cold weather is leading to more people catching bugs such as flu and Covid.

Lockdown restrictions earlier in the pandemic have also lowered people’s immunity to winter viruses, some claim.

How prevalent is Covid in YOUR area? Winter wave picks up pace as hospital admissions soar by a THIRD and ‘flu-nami’ rocks the ailing NHS

Is the NHS on its last legs? Ex Health Secretary Sajid Javid says £150bn-a-year system ‘won’t survive many more years’ without huge reform as he demands an ‘honest debate’ on next steps for British healthcare