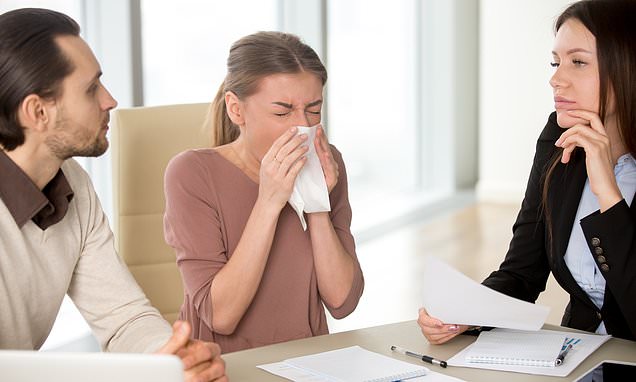 Got a cough? Etiquette expert reveals her six ways to manage your germs politely this winter

Having a cough and being full of germs can be annoying, not only for you but for everyone around you.

And if you’ve ever been worried about how to manage your illness in public without offending others, you’re not alone.

But here, in a piece for Healthista, a leading etiquette expert reveals her six polite ways to manage your germs. 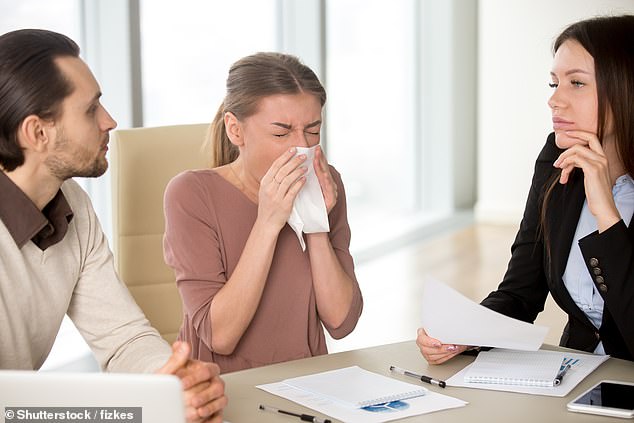 Etiquette expert Jo Bryant reveals her six ways to manage your germs politely this winter to avoid spreading a cough, as a survey reveals half of commuters have been coughed on

We are rapidly approaching the beginning of January, which is peak cough season.

It’s the month when, no matter how much vitamin C you’ve mainlined over the Christmas holidays, you’ll likely be spluttering into your handkerchief just when it’s time to go back to work.

And this is where you will face a typical dilemma of the coughing season: to soldier on spluttering in meetings, hacking into your handkerchief, or to stay home tucked up under your duvet only to lose hard-won brownie points with your boss.

If you’d rather not alienate work co-workers a day in bed could be the answer that is, unless, you live with a woman, in which case you risk putting your relationship under pressure, since one quarter of women (24 per cent) say their partner’s cough annoys them.

Men, however, are more sympathetic, with more than one third saying they wait on their partner hand and foot when they have a cough and a quarter offering to take over all the household chores.

Public transport is another cause for coughing conflict, says the new research, with half of those surveyed complaining that coughing commuters splutter over them with little or no concern for their fellow passengers’ health.

‘Coughing season can be an absolute minefield,’ agrees etiquette expert Jo Bryant, who has worked at the etiquette guide book Debrett’s for over a decade.

‘Year after year I see poor cough etiquette from spluttering through social occasions, to coughing over a colleague’s desk. We have a very British attitude to coughing.

‘We carry on, we still go to work and even to the gym and still go around shaking hands.’

Bryant now works advising foreign businesses on the nuances of English manners. If you’re invited to tea at the Palace, she’s your woman (you must stop eating when the queen does or risk a royal faux pas).

Here are her fail-safe tips for navigating the coughing season without losing friends and alienating people with your projectile germs:

If you’re the one with the cough don’t splutter over your loved ones.

‘Etiquette is really just about how we treat other people,’ said Ms Bryant. With coughing etiquette, you have a duty of care to other people.

‘If there’s anything you can do to suppress the symptoms, like sucking a cough sweet, or washing your hands, that will stop the spread of germs.’

2. Cough into a tissue, not your hand

‘At school children are now taught to cough into the crook of their arm, rather than put their hand over their mouth, it looks a bit dramatic but it’s a definite improvement from when I was at school and everyone coughed and spluttered everywhere.

‘The main problem with coughing is the poor cough hygiene. It’s about hand avoidance, cough into a tissue.

‘As the government guidelines say, then “bin it”.’

And be prepared – ‘A well-mannered commuter has anti-bacterial hand gel,’ said Ms Bryant.

3. Hold off on the handshakes

Funnily enough, 83 per cent of us will happily shake hands with someone with a cough, perhaps because we don’t realise this puts us at risk of picking up germs.

But if you have a cough Ms Bryant claims it’s better to be honest and keep your hands to yourself.

‘If you’re the person who is ill, have the confidence to say: “I’ve got a stinking cold, so, I’m going to keep my distance and I won’t shake your hand”‘, said Ms Bryant.

4. Offer compassion (and a cough sweet)

If you’re faced with a cougher who is spluttering in meetings or coughing over their keyboards, it might be tempting to glare at them or bitch behind their back, but this passive aggressive stance can lead to tension in the office, according to the Jacksons research.

The genteel thing to do is ‘offer small acts of kindness,’ said Ms Bryant. Like a packet of tissues or cough sweet perhaps?

‘Acts of kindness can be instructive rather than telling people what to do,’ said Ms Bryant diplomatically.

‘The person that’s hacking isn’t doing it on purpose, so we should be showing some compassion and consideration.

‘If someone is coughing at work you could say: “Have you tried this? It works for me I hope it helps”.

‘If someones cough is causing irritation, one should step back from them or move seat, rather than being confrontational or rude.’ 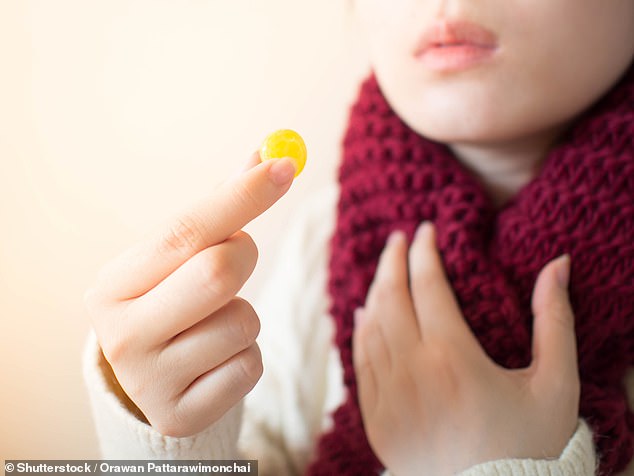 Try offering people who are irritating you a solution that has worked for you, such as cough sweets, rather than being confrontational or rude, says Jo Bryant

5. Stay at home, unless it’s a deal breaker

Whether you take the week off will depend on your job, said Ms Bryant.

‘If you have a job where you can easily work at home it makes sense to work there,’ she added.

‘But if you’re going to be signing a multi-million pound deal with someone who has just flown in from China, then it makes more sense to turn up.

‘Just wash your hands and have a cough sweet to suppress the symptoms.’

And if you’ve taken time off don’t come back to work until you’ve recovered or you still risk spreading germs. As long as you’re coughing, you’re infectious.

Don’t be afraid to say “No” to Christmas drinks.

‘Although it’s tempting, battle on despite your symptoms. Dates and friends will not appreciate your coughing in company,’ said Ms Bryant.

6. Try to suppress it

‘If you can suppress your cough, then do,’ said Ms Bryant.

‘With any kind of gesture you shouldn’t be doing anything that is going to revolt others,’ said Ms Bryant.

Ask yourself: ‘Would you like to look down the back of someone’s throat?’

The bottom line on coughing etiquette? Don’t be revolting.

This article was originally published on Healthista and reproduced with its permission.

The rocketing number of flu cases in the UK and across the world was put down to a surge in four aggressive subtypes that attacked the population simultaneously.

One included the so-called ‘Aussie flu’, a strain of influenza A which triggered triple the number of expected cases in Australia during the country’s winter.

Experts feared the virulent H3N2 strain, which reached the UK, could prove as deadly to humanity as the Hong Kong flu in 1968, which killed one million people.

Another was a strain of influenza B, called Yamagata and dubbed ‘Japanese flu’, which was blamed for the majority of cases during the UK’s winter.

Its rapid spread raised concerns because it was not covered in a vaccine given to the elderly. However, experts claim it was less severe.

Usually, just one subtype, of either influenza A or B, is responsible for the majority of cases. The bug spreads easily in the cold weather.