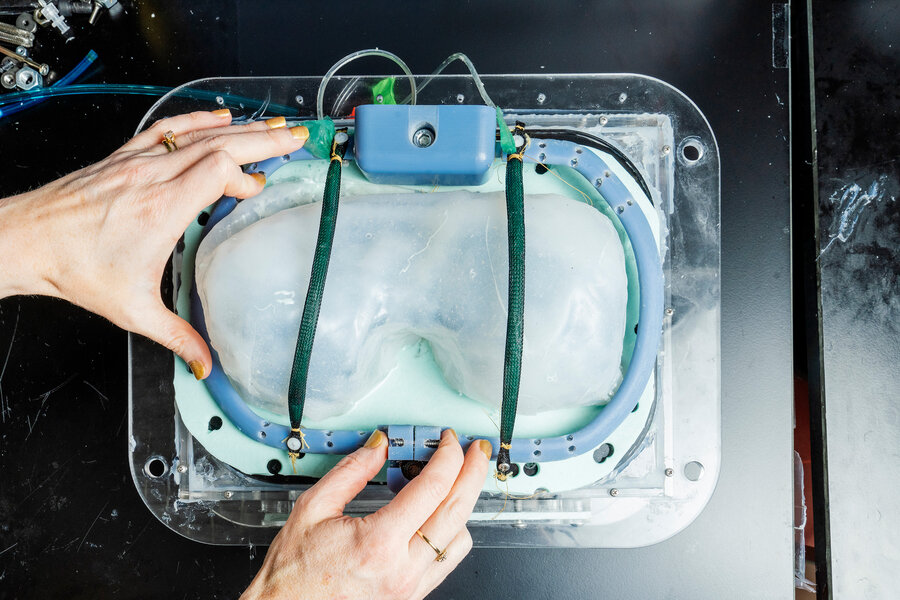 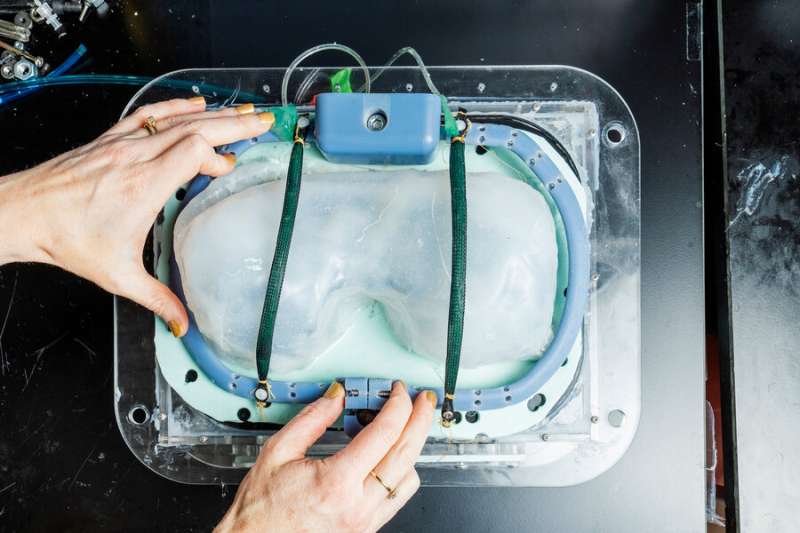 For many of us, the act of breathing comes naturally. Behind the scenes, our diaphragm—the dome-shaped muscle that lies just beneath the ribcage—works like a slow and steady trampoline, pushing down to create a vacuum for the lungs to expand and draw air in, then relaxing as air is pushed out. In this way, the diaphragm automatically controls our lung capacity, and is the major muscle responsible for our ability to breathe.

But when the diaphragm’s function is compromised, the breathing instinct becomes a laborious task. Chronic diaphragm dysfunction can occur in people with ALS, muscular dystrophy, and other neuromuscular diseases, as well as patients with paralysis, and damage to the phrenic nerve, which stimulates the diaphragm to contract.

A new proof-of-concept design by MIT engineers aims to one day boost the diaphragm’s life-sustaining function and improve lung capacity for people with diaphragm dysfunction.

The MIT team has developed a soft, robotic, and implantable ventilator that is designed to augment the diaphragm’s natural contractions. At the heart of the system are two soft, balloon-like tubes that can be implanted to lie over the diaphragm. When inflated with an external pump, the tubes act as artificial muscles to push down on the diaphragm and help the lungs expand. The tubes can be inflated at a frequency to match the diaphragm’s natural rhythm.

The researchers demonstrated the implantable ventilator in animal models, and showed that in cases of compromised diaphragm function, the system was able to significantly improve the amount of air that the lungs could draw in.

There is still much work to be done before such an implantable system can be used to treat humans with chronic diaphragm dysfunction. But the preliminary results open a new path in assistive breathing technology that the researchers are eager to optimize.

“This is a proof of concept of a new way to ventilate,” says Ellen Roche, associate professor of mechanical engineering and a member of the Institute for Medical Engineering and Science at MIT. “The biomechanics of this design are closer to normal breathing, versus ventilators that push air into the lungs, where you have a mask or tracheostomy. There’s a long road before this will be implanted in a human. But it’s exciting that we could show we could augment ventilation with something implantable.”

Roche and her colleagues published their results December 12 in Nature Biomedical Engineering. Her co-authors at MIT include first author and former graduate student Lucy Hu, as well as Manisha Singh, and Diego Quevedo Moreno; along with Jean Bonnemain of Lausanne University Hospital in Switzerland, and Mossab Saeed and Nikolay Vasilyev of Boston Children’s Hospital.

The team’s implantable ventilator design grew out of Roche’s previous work on an assistive device for the heart. As a graduate student at Harvard University, Roche developed a cardiac sleeve designed to wrap around the heart to relieve pressure and provide support as the organ pumps.

Now at MIT, she and her research group found that a similar soft, robotic assistance could be applied to other tissues and muscles.

“We thought, what’s another big muscle that pumps cyclically and is life sustaining? The diaphragm,” Roche says.

The team began exploring designs for an implantable ventilator well before the start of the COVID-19 pandemic, when use of conventional ventilators spiked along with cases. Those ventilators create positive pressure, in which air is pushed down through a patient’s central airways and forced into the lungs. 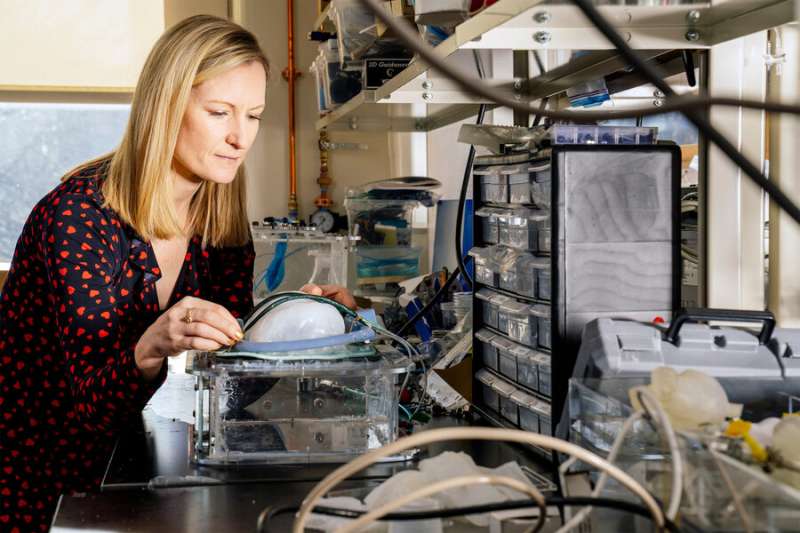 The diaphragm, by contrast, creates negative pressure. When the muscle contracts and pushes downward, it creates a negative pressure that sucks air in to the lungs, similar to pulling the handle of a bike pump to draw in air.

Roche’s team looked to design a negative pressure ventilator—a system that could help augment the natural function of the diaphragm, particularly for those with long-term breathing dysfunction.

“We were really thinking of chronically ill people that have these degenerative diseases that are progressively getting worse,” she says.

‘The work of breathing’

The new system reported in the paper consists of two long, soft and inflatable tubes, which take after a type of pneumatic devices known as McKibben actuators. The team adapted the tubes to lie across the diaphragm (from front to back) and attach to the ribcage at either side of the dome-shaped muscle. One end of each tube connects to a thin external airline, which runs to a small pump and control system.

By analyzing the diaphragm’s contractions, the team can program the pump to inflate the tubes at a similar frequency.

“We realized we don’t have to fully mimic exactly how the diaphragm moves—we just have to give it an extra push downward when it naturally contracts,” Roche says.

The researchers tested the system on anesthetized pigs, implanting the tubes over the animals’ diaphragm, and surgically attaching the ends of the tubes to ribs on either end of the muscle. They monitored the animals’ oxygen levels and observed their diaphragm function using ultrasound imaging.

The team found that in general, the implantable ventilator increased the pigs’ tidal volume, or the amount of air that the lungs could draw in with every breath. The most significant improvement was seen in cases where the contractions of the diaphragm and the artificial muscles were in sync. In these cases, the ventilator helped the diaphragm draw in three times the amount of air than it would without assistance.

“We were excited to see we could get such changes in the tidal volume, and we were able to rescue ventilation,” Roche says.

The team is working to optimize various aspects of the system, with the goal of some day implementing it in patients with chronic diaphragm dysfunction.

“The vision is, we know certain parts of this system could be miniaturized,” Roche says. “The pump and control system could be worn on a belt or backpack, or even potentially fully implantable. There are implantable heart pumps, so we know it’s doable. For now, we are learning a lot about the biomechanics and the work of breathing, and how we can augment all that with this new approach.”