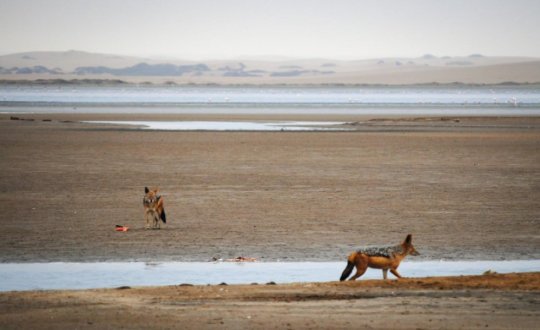 Given the importance and wide distribution of Influenza A viruses, it is surprising how little is known about infections of wild mammals. A new study led by Alex D. Greenwood and Gábor Á. Czirják of the Leibniz Institute for Zoo and Wildlife Research (Leibniz-IZW) in Berlin sheds light on which species are commonly infected and why. The scientists detected virus exposure among wild African mammals in Namibia and demonstrated that the most important factor for influenza A virus diversity and prevalence is a diet containing birds. Species relationship or sociality play surprisingly small roles. The results have been published in The Journal of Infectious Diseases.

In order to better understand influenza A dynamics in wild mammals a joint study was undertaken by the Leibniz-IZW, the Erasmus Medical Centre and colleagues in Namibia. The scientists examined 111 serum samples from different Namibian mammals to determine which influenza A viruses these species had been exposed to. “The prevalence and diversity was high but not random with herbivores showing low prevalence and diversity and several carnivore showing the highest diversity and prevalence,” explains Czirják, research scientist at the Leibniz-IZW. For the tests the team employed a virus chip system developed by the Erasmus Medical Centre in Rotterdam.

The team tested three hypotheses to clarify whether relatedness, sociality, or diet containing birds (and hence potential direct influenza A exposure) were driving the observed diversity and prevalence. Relatedness could be expected to have a major effect as the receptors and physiology among related species is more similar and therefore viruses should have an easier time infecting related species. However, the results suggested this did not play a role in the observations. Sociality might be expected to play a role if animals in herds in particular would quickly spread a virus unlike animals that are largely solitary. However, this did not appear to be a driving force either as many social herbivores had no or low influenza exposure. “The common thread for high diversity and prevalence was a diet that includes birds,” concludes Sanatana Soilemetzidou, PhD student and first author of the study. “Therefore animals like jackals and caracals, which feed on birds, had a higher diversity and prevalence of influenza A virus exposure.”

Influenza A viruses are among the best studied and most important zoonotic pathogens in terms of human and domestic animal health. The viruses are typically associated with wild waterfowl and regularly jump into mammals including humans. The transmission between birds and mammals often results in adaptation of the virus to the new mammal host. “That is why it is particularly surprising that so little information is available on what influenza A strains infect wild mammals,” says Greenwood, head of the Leibniz-IZW Department of Wildlife Diseases. “If bird derived influenza A virus adapts to mammals in the wild, the mammals could become stepping stones to infection of humans and domestic animals with mammal adapted strains.”

The study was carried out in Namibia where mammalian species diversity is high, waterfowl known to carry influenza are resident, domestic animals and wild animals intermingle on farms and major waterfowl migratory routes transect the country making the results significant beyond Namibia and perhaps beyond Africa. The Leibniz-IZW conducts several long term research projects in Namibia.