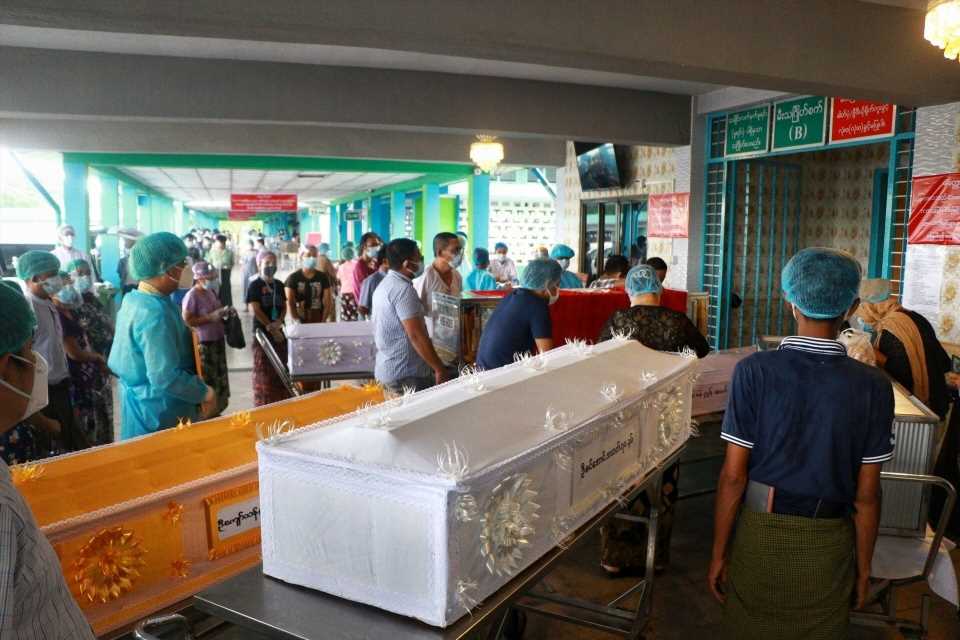 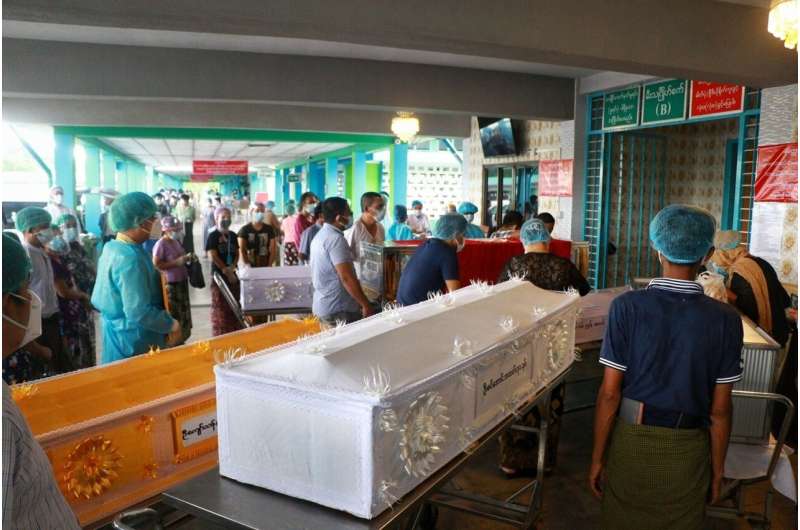 Indonesia has converted nearly its entire oxygen production to medical use just to meet the demand from COVID-19 patients struggling to breathe. Overflowing hospitals in Malaysia had to resort to treating patients on the floor. And in Myanmar’s largest city, graveyard workers have been laboring day and night to keep up with the grim demand for new cremations and burials.

Images of bodies burning in open-air pyres during the peak of the pandemic in India horrified the world in May, but in the last two weeks the three Southeast Asian nations have now all surpassed India’s peak per capita death rate as a new coronavirus wave, fueled by the virulent delta variant, tightens its grip on the region.

The deaths have followed record numbers of new cases being reported in countries across the region which have left health care systems struggling to cope and governments scrambling to implement new restrictions to try to slow the spread.

When Eric Lam tested positive for COVID-19 and was hospitalized on June 17 in the Malaysian state of Selangor, the center of the country’s outbreak, the corridors of the government facility were already crowded with patients on beds with no room left in the wards.

The situation was still better than in some other hospitals in Selangor, Malaysia’s richest and most populous state, where there were no free beds at all and patients were reportedly treated on floors or on stretchers. The government has since added more hospital beds and converted more wards for COVID-19 patients. 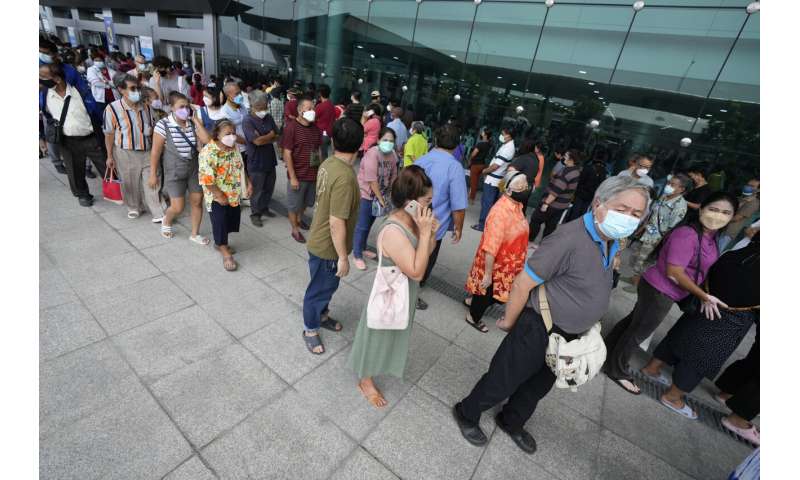 Lam, 38, recalled once during his three weeks in the hospital hearing a machine beeping continuously for two hours before a nurse came to turn it off; he later learned the patient had died.

A variety of factors have contributed to the recent surge in the region, including people growing weary of the pandemic and letting precautions slip, low vaccination rates and the emergence of the delta variant of the virus, which was first detected in India, said Abhishek Rimal, the Asia-Pacific emergency health coordinator for the Red Cross, who is based in Malaysia.

“With the measures that countries are taking, if people follow the basics of washing the hands, wearing the masks, keeping distance and getting vaccinated, we will be seeing a decline in cases in the next couple of weeks from now,” he said. 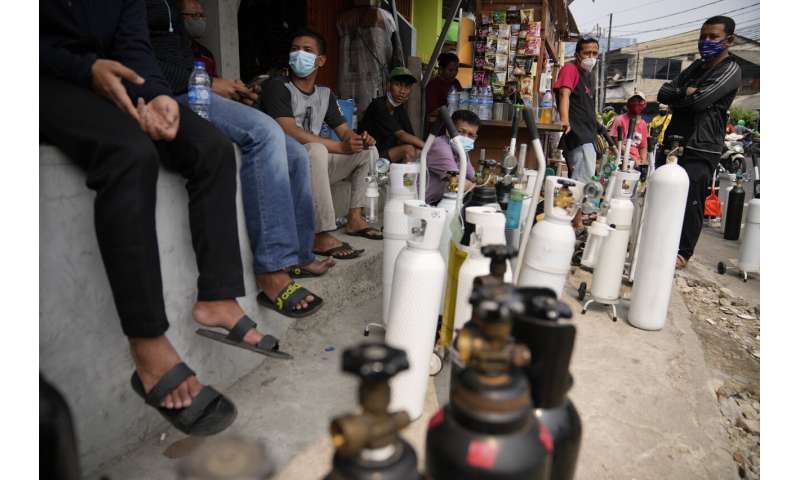 So far, however, Malaysia’s national lockdown measures have not brought down the daily rate of infections. The country of some 32 million saw daily cases rise above 10,000 on July 13 for the first time and they have stayed there since.

The vaccination rate remains low but has been picking up, with nearly 15% of the population now fully inoculated and the government hoping to have a majority vaccinated by year’s end.

Doctors and nurses have been working tirelessly to try to keep up, and Lam was one of the fortunate ones.

After his condition initially deteriorated, he was put on a ventilator in an ICU unit filled to capacity and slowly recovered. He was discharged two weeks ago.

But he lost his father and brother-in-law to the virus, and another brother remains on a ventilator in the ICU.

“I feel I have been reborn and given a second chance to live,” he said. 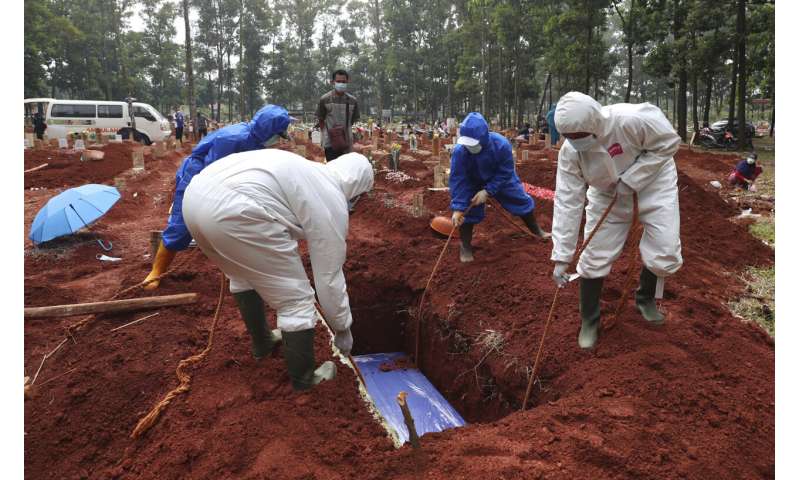 With India’s massive population of nearly 1.4 billion people, its total number of COVID-19 fatalities remains higher than the countries in Southeast Asia. But India’s 7-day rolling average of COVID-19 deaths per million peaked at 3.04 in May, according to the online scientific publication Our World in Data, and continues to decline.

Indonesia, Myanmar, and Malaysia have been showing sharp increases since late June and their seven-day averages hit 4.37, 4.29 and 4.14 per million, respectively, on Wednesday. Cambodia and Thailand have also seen strong increases in both coronavirus cases and deaths, but have thus far held the seven-day rate per million people to a lower 1.55 and 1.38, respectively.

Individual countries elsewhere have higher rates, but the increases are particularly alarming for a region that widely kept numbers low early in the pandemic. 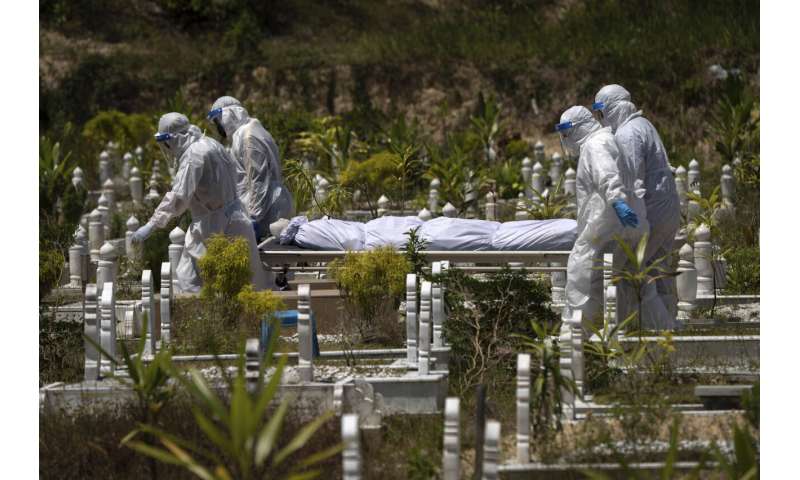 With the Indian experience as a lesson, most countries have reacted relatively quickly with new restrictions to slow the virus, and to try to meet the needs of the burgeoning number of people hospitalized with severe illnesses, Rimal said.

“People in this region are cautious, because they have seen it right in front of them—400,000 cases a day in India—and they really don’t want it to repeat here,” he said in a telephone interview from Kuala Lumpur.

But those measures take time to achieve the desired effect, and right now countries are struggling to cope.

Indonesia, the world’s fourth most populous nation with some 270 million people, reported 1,383 deaths on Wednesday, its deadliest day since the start of the pandemic.

Daily cases through about mid-June had been about 8,000, but then began to spike and peaked last week with more than 50,000 new infections each day. Because Indonesia’s testing rate is low, the actual number of new cases is thought to be much higher. 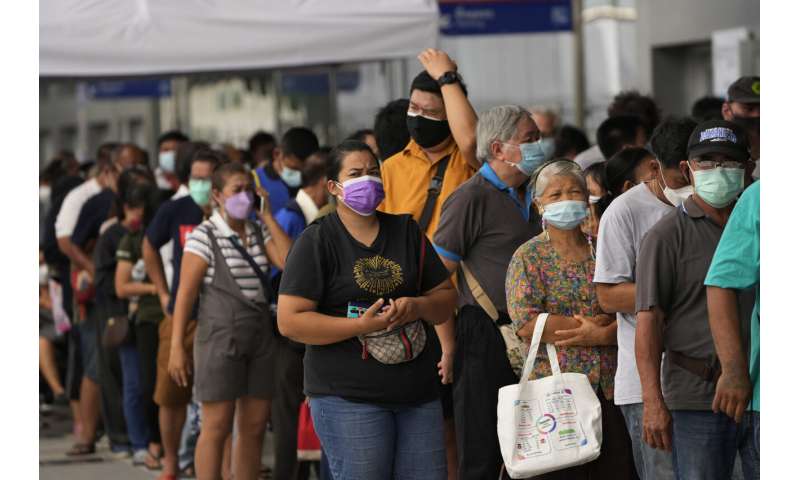 As hospitals there began to run out of oxygen, the government stepped in and ordered manufacturers to shift most production from industrial purposes and dedicate 90% to medical oxygen, up from 25%.

Before the current crisis, the country needed 400 tons of oxygen for medical use per day; with the sharp rise in COVID-19 cases, daily use has increased fivefold to more than 2,000 tons, according to Deputy Health Minister Dante Saksono.

Though the production of oxygen is now sufficient, Lia Partakusuma, secretary general of Indonesia’s Hospital Association, said there were problems with distribution so some hospitals are still facing shortages.

In Indonesia, about 14% of of the population has had at least one vaccine dose, primarily China’s Sinovac.

There are growing concerns that Sinovac is less effective against the delta variant, however, and both Indonesia and Thailand are planning booster shots of other vaccines for their Sinovac-immunized health workers. 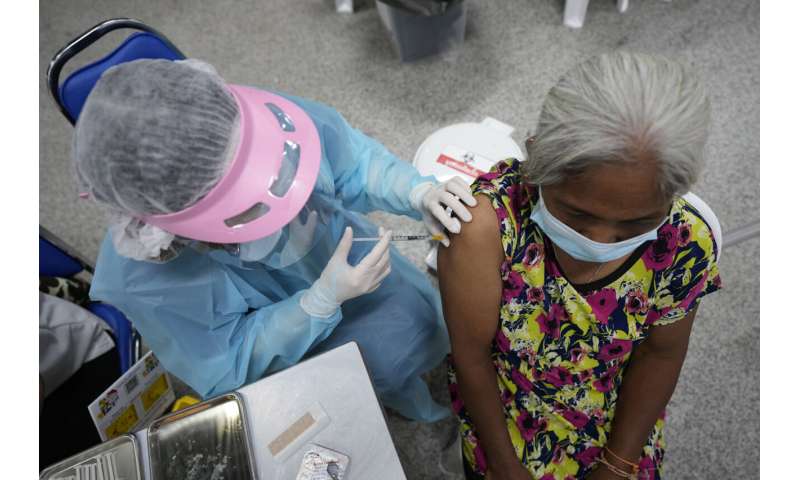 In Myanmar, the pandemic had taken backseat to the military’s power seizure in February, which set off a wave of protests and violent political conflict that devastated the public health system.

Only in recent weeks, as testing and reporting of COVID-19 cases has started recovering, has it become clear that a new wave of the virus beginning in mid-May is pushing cases and deaths rapidly higher.

Since the start of July its death rate has been climbing almost straight up, and both cases and fatalities are widely believed to be seriously underreported.

“With little testing capacity, low numbers in the country vaccinated, widespread shortages of oxygen and other medical supplies, and an already beleaguered health care system under increasing strain, the situation is expected to get increasingly worse in the coming weeks and months,” said ASEAN Parliamentarians for Human Rights, a regional advocacy group. 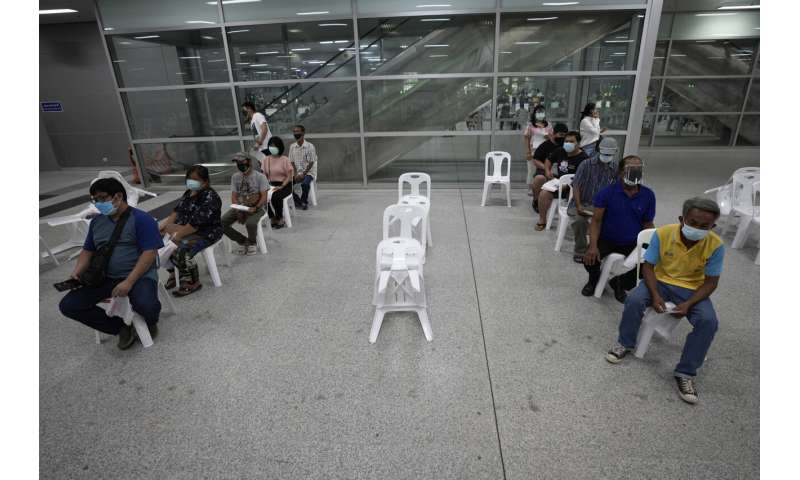 “Meanwhile, the junta’s confiscation of oxygen, attacks on health care workers and facilities since the coup, and the lack of trust in any services they provide by the majority of the population, risks turning a crisis into a disaster.”

On Tuesday, the government reported 5,860 new cases and 286 new deaths. There are no solid figures on vaccinations, but from the number of doses that have been available, it’s thought that about 3% of the population could have received two shots.

Officials this week pushed back at social media postings that cemeteries in Yangon were overwhelmed and could not keep up with the number of dead, inadvertently confirming claims that hospitals were swamped and many people were dying at home.

Cho Tun Aung, head of the department that oversees the cemeteries told military-run Myawaddy TV news on Monday that 350 staff members had been working three shifts since July 8 to ensure proper cremations and burials of people at Yangon’s seven major cemeteries. 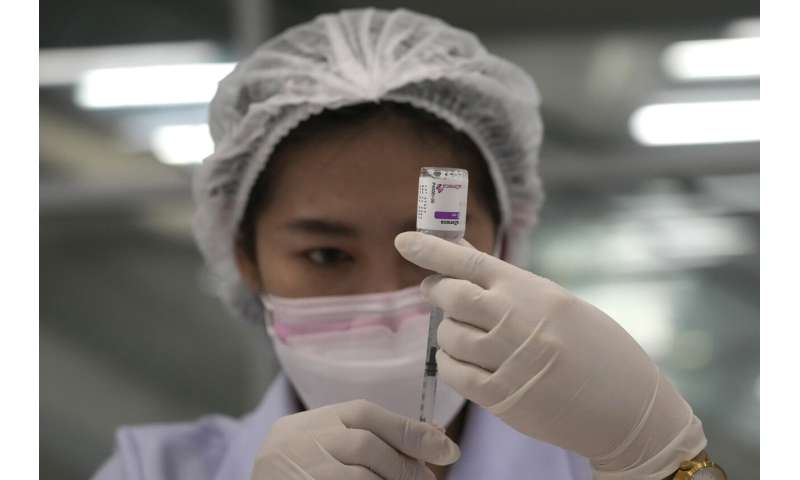 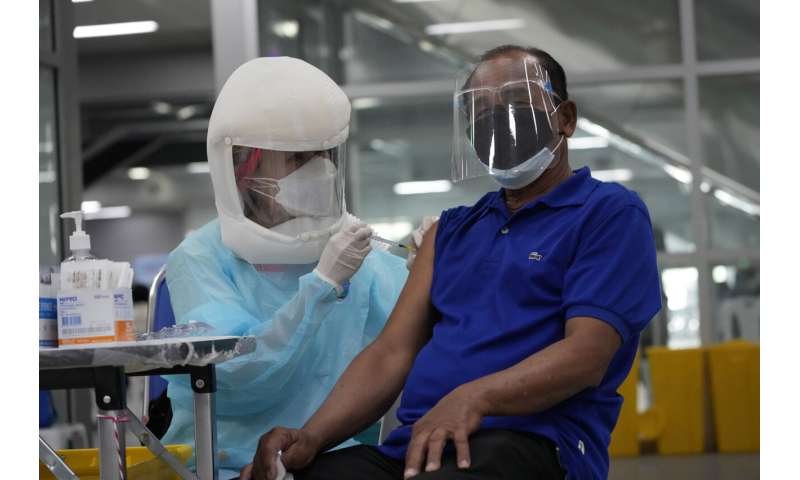 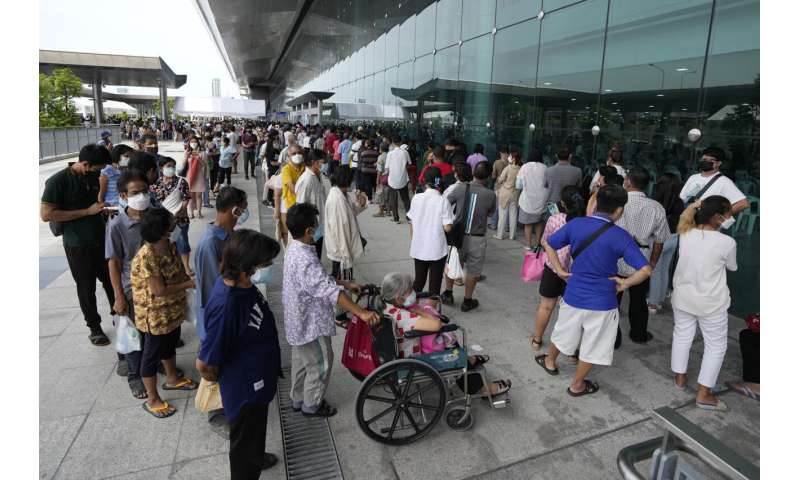 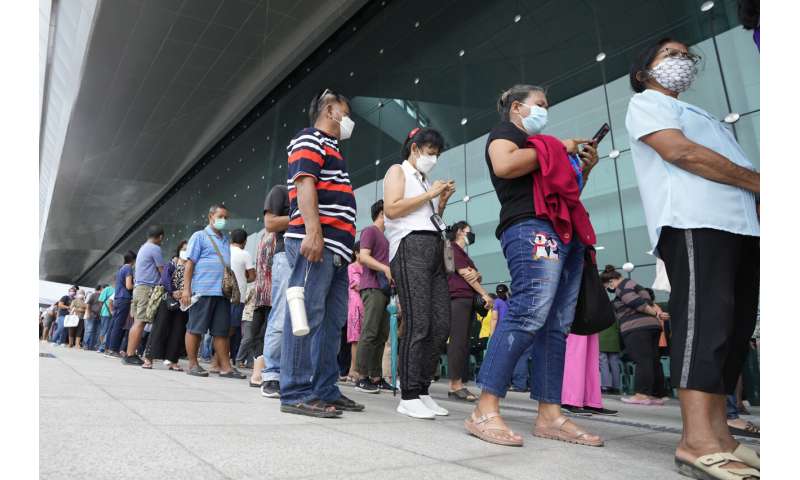 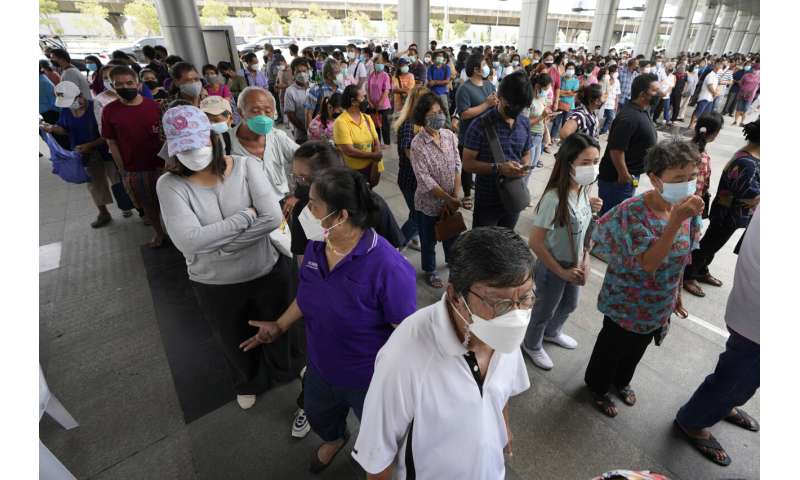 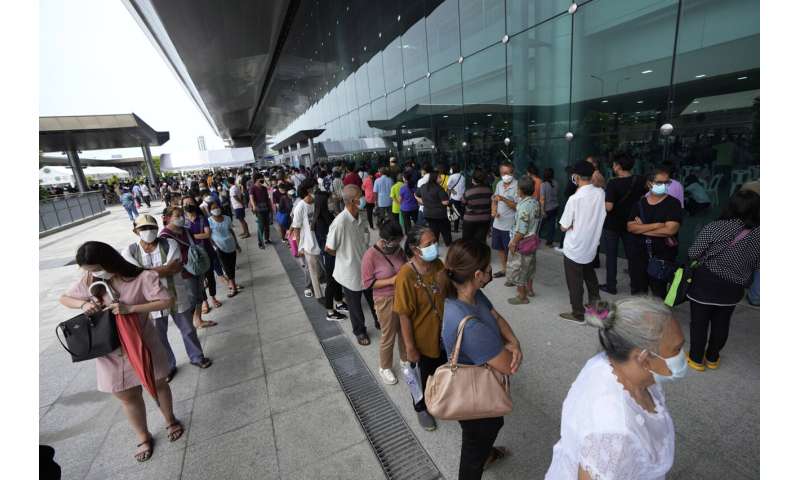 He said workers had cremated and buried more than 1,200 people on Sunday alone, including 1,065 who had died at home of COVID-19 and 169 who had died in hospitals.