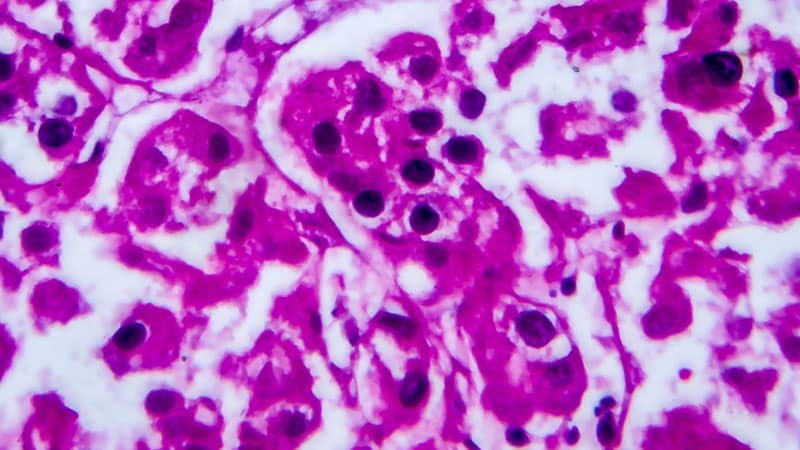 The decades-long search for a safe, effective adjuvant therapy for patients with resected kidney cancer at high risk of recurrence appears to have taken a big step in the right direction, according to expert opinion.

The high hopes have been generated by results from the randomized phase 3 KEYNOTE-564 trial, showing that monotherapy with pembrolizumab (Keytruda, Merck) was associated with significantly longer disease-free survival (DFS) after nephrectomy than placebo (77.3% vs 68.1%, respectively). Median follow-up was 24 months.

The results come from the trial’s first interim analysis of data from 994 patients with clear-cell renal cell carcinoma (RCC) at high risk of recurrence.

For the pembrolizumab group, the estimated percentage alive at 24 months was 96.6% compared with 93.5% in the placebo group (hazard ratio [HR] for death, 0.54), said Toni Choueiri, MD, of the Dana Farber Cancer Institute, Boston, Massachusetts, and colleagues.

However, Grade 3 or higher adverse events (any cause) occurred at almost twice the rate in the pembrolizumab versus the placebo group (32.4% vs 17.7%). The new study was published online August 18 in the New England Journal of Medicine.

The study results were first presented at this year’s virtual American Society of Clinical Oncology (ASCO) meeting and described as likely to be practice-changing in this setting, as reported by Medscape Medical News.

Currently, this patient population has “no options for adjuvant therapy to reduce the risk of recurrence that have high levels of supporting evidence,” observe the authors.

That’s about to change, as the trial results “herald the dawn of a new era in the treatment of renal cell carcinoma,” writes Rana McKay, MD, University of California San Diego Health, in an accompanying editorial.

Multiple studies have investigated potential adjuvant therapies in RCC since the 1980s, she observes.

“For the first time, we now have an effective adjuvant immunotherapy option for patients with resected renal cell carcinoma at high risk of recurrence,” McKay said to Medscape Medical News.

To date, the lack of clinically beneficial adjuvant therapy options in RCC has been “humbling,” Choueiri told Medscape Medical News. “We hope we can push the envelope further and get more patients with RCC some good options that make them live longer and better.”

Although the standard of care for patients diagnosed with locoregional RCC is partial or total nephrectomy, nearly half of patients eventually experience disease recurrence following surgery, Choueiri noted.

“No standard, globally approved adjuvant therapy options are currently available for this population,” he said. Clinical guidelines recommend patients at high risk of disease recurrence after surgery be entered into a clinical trial or undergo active surveillance.

Researchers will continue to follow the results for overall survival, a secondary endpoint. “The very early look suggests encouraging results [in overall survival] with an HR of 0.54,” Choueiri noted.

In the meantime, the prolongation of DFS represents a clear clinical benefit, said McKay, “given the magnitude of the increase” and “the limited incidence of toxic effects.”

KEYNOTE-564 will alter the adjuvant treatment landscape for RCC as a positive phase 3 trial of adjuvant immunotherapy for the disease, she added.

A number of earlier studies have investigated the use of adjuvant vascular endothelial growth factor (VEGF)-targeting agents in RCC. Only the 2016 Sunitinib Treatment of Renal Adjuvant Cancer (S-TRAC) trial showed improved DFS with sunitinib compared with placebo (6.8 vs 5.6 years). Subsequently, sunitinib was approved for adjuvant use in the United States. However, the S-TRAC trial also showed that sunitinib therapy was associated with an increased incidence of toxic effects and lower quality-of-life scores, and researchers did not observe any benefit in overall survival.

“Despite regulatory approval in the US, sunitinib is not approved for adjuvant use by the European Medicines Agency and has limited utilization in clinical practice given the low benefit-risk ratio,” McKay pointed out.

KEYNOTE-564 involved 996 patients with clear-cell RCC at high risk for recurrence after nephrectomy, with or without metastasectomy. They were randomly assigned in a 1:1 ratio to receive a 200-mg dose of adjuvant pembrolizumab or placebo given intravenously once every 3 weeks for up to 17 cycles for approximately 1 year.

The vast majority of patients enrolled in the study had localized disease with no evidence of metastases (M0) and intermediate-to-high or high-risk of disease recurrence after partial or complete nephrectomy. However, 5.8% of patients in both the pembrolizumab and placebo groups had M1 NED (metastatic stage 1, no evidence of disease) status after nephrectomy and resection of metastatic lesions. These patients were also at intermediate-to-high or high-risk of recurrence.

The benefit of pembrolizumab compared with placebo was maintained in this subgroup, say investigators. “At this point, we continue to look at the data, but we know that there was a benefit for DFS in the population we included,” said Choueiri. “When we looked at several subgroups such as PD-L1 status, geography, gender, performance status, M0/M1, all HRs were < 1 suggesting benefit from pembrolizumab over placebo.”

“Subset analyses by stage are going to be important to determine which group of patients will derive the most benefit,” asserted McKay. “While those with M1 NED appear to derive benefit with HR for DFSof 0.29, those with M1 NED comprise a small percentage of patient enrolled in the trial.”

Studies exploring tissue- and blood-based biomarkers, including circulating tumor DNA, will be key to identify patients at highest risk for recurrence or adjuvant treatment, McKay emphasized. “The adoption of adjuvant immune checkpoint inhibitors brings along new questions regarding patient selection, therapeutic use in patients with non–clear-cell renal cell carcinoma, and systemic treatment after recurrence during or after the receipt of adjuvant therapy.”

KEYNOTE-564 was funded by Merck. Mutliple study authors including Choueiri have financial ties to the pharmaceutical industry, including Merck.