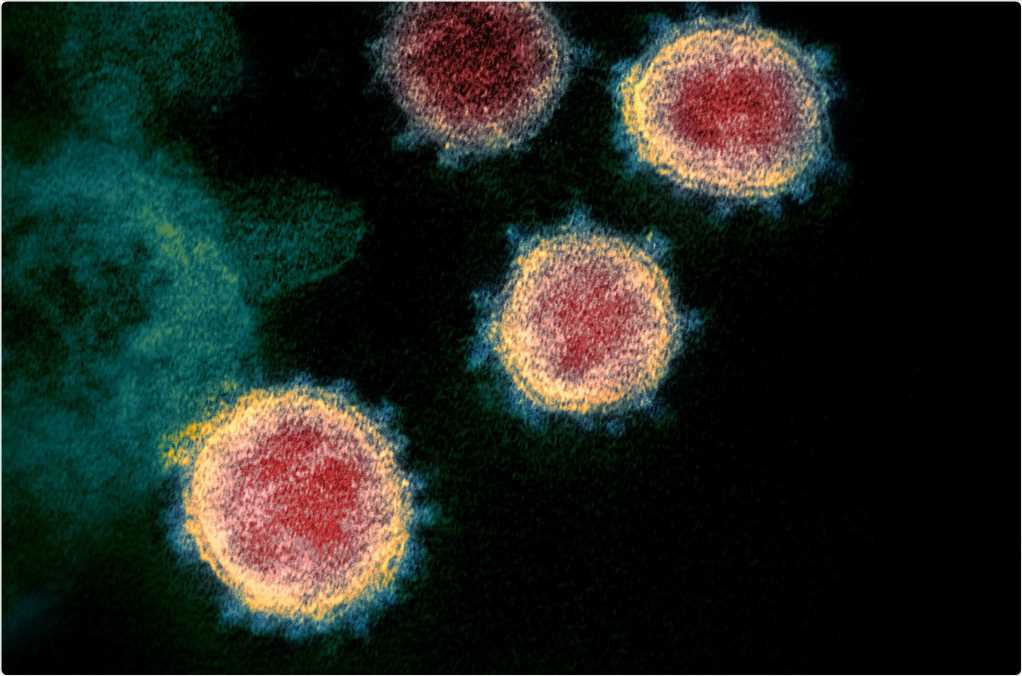 Researchers in the United States have provided important insights into the pathophysiology of diarrhea that occurs in some cases of coronavirus disease 2019 (COVID-19).

The team says the “COVID-19 diarrhea” that may develop following infection with the causative agent severe acute respiratory syndrome coronavirus 2 (SARS-CoV-2) is the first example of viral diarrhea that is dependent on the inflammatory response that occurs as part of the disease.

The researchers from the Johns Hopkins University School of Medicine in Baltimore, Maryland, and the University of New Mexico Health Sciences Center in Albuquerque have shown that one change in the intestinal transport process is the inhibition of two proteins (NHE3 and DRA) that enable neutral sodium chloride (NaCl) absorption – the primary way that sodium is absorbed from the intestine in between meals.

The secretion of chloride is stimulated by activating the calcium-activated chloride channel (CaCC) by a mechanism dependent on increased intracellular calcium ions (Ca 2+).

“The diarrhea of COVID-19 appears to be an example of a calcium-dependent inflammatory diarrhea that involves both acutely stimulated Ca2+ dependent anion secretion that involves CaCC and likely inhibition of neutral NaCl absorption,” writes Olga Kovbasnjuk and the team.

A pre-print version of the research paper is available on the bioRxiv* server, while the article undergoes peer review. 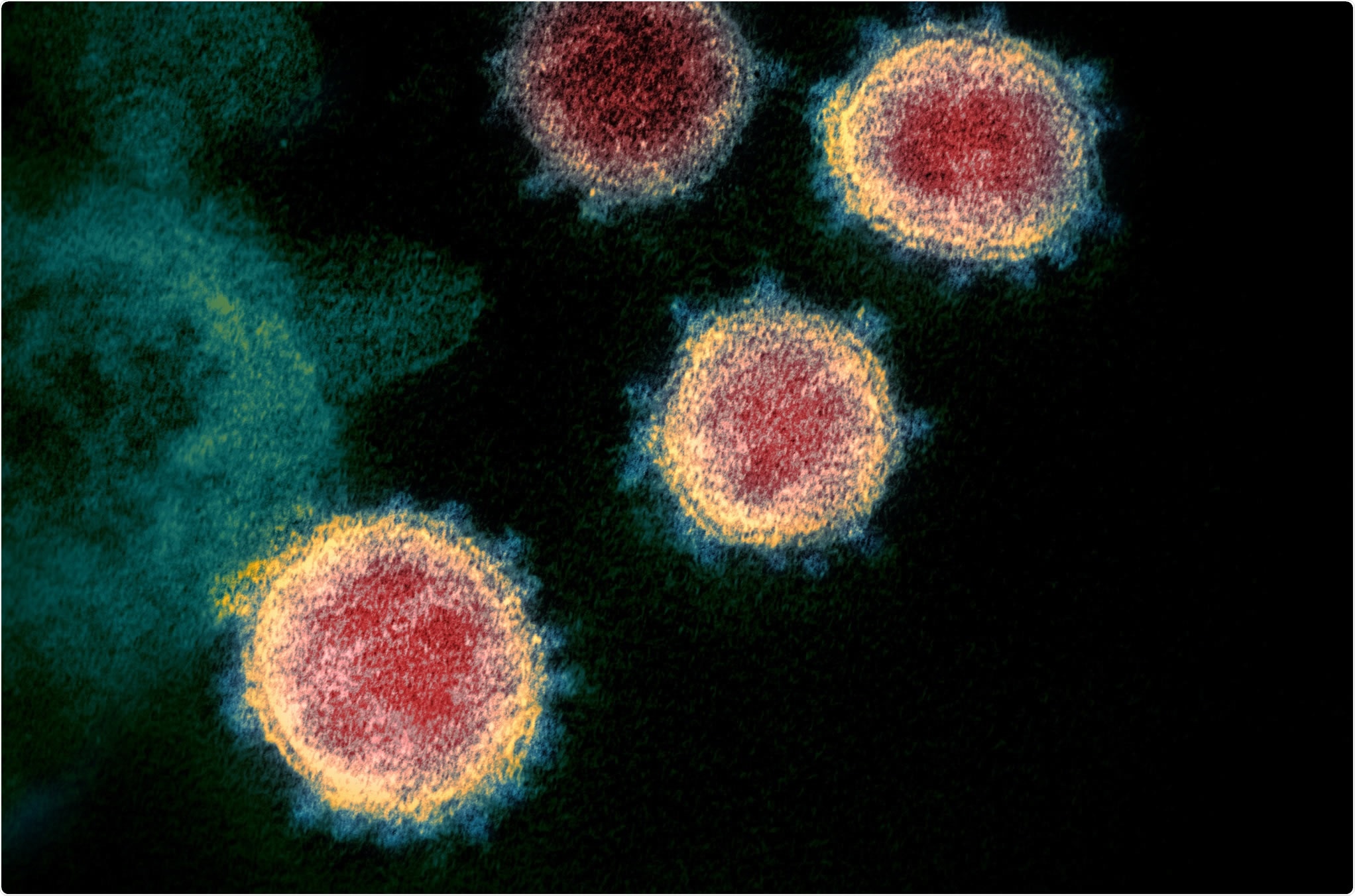 The number of recognized clinical manifestations of COVID-19 continues to increase, including the persistent manifestations seen in prolonged disease or “Long COVID.”

Gastrointestinal (GI) manifestations such as diarrhea present in the early stages of the disease, but can occur throughout the course of the disease, including during the prolonged phase.

These GI manifestations are thought to occur as a result of direct luminal rather than systemic contact between SARS-CoV-2 and the GI tract.

“SARS-CoV-2 can be recovered from the lumen of the intestine… where it binds and replicates in human enterocytes,” says Donowitz and colleagues.

Important gaps in understanding of the effects SARS-CoV-2 has on the intestine include the intestinal sites affected, the mechanisms through which the virus causes diarrhea and whether the inflammatory response that occurs in COVID-19 contributes to producing diarrhea.

“Also unknown is the role of the GI tract in the many clinical aspects of SARS-CoV-2 infection, including viral replication and disease progression,” says the team.

What did the current study involve?

The researchers exposed a human enteroid model composed of enteroid monolayers from five healthy individuals to live SARS-CoV-2 as well as virus-like particles (VLPs) made from exosomes expressing the viral spike, nucleocapsid, membrane, and envelope proteins

A high concentration of viral RNA was also detected in the apical and basolateral media up to five days following exposure. 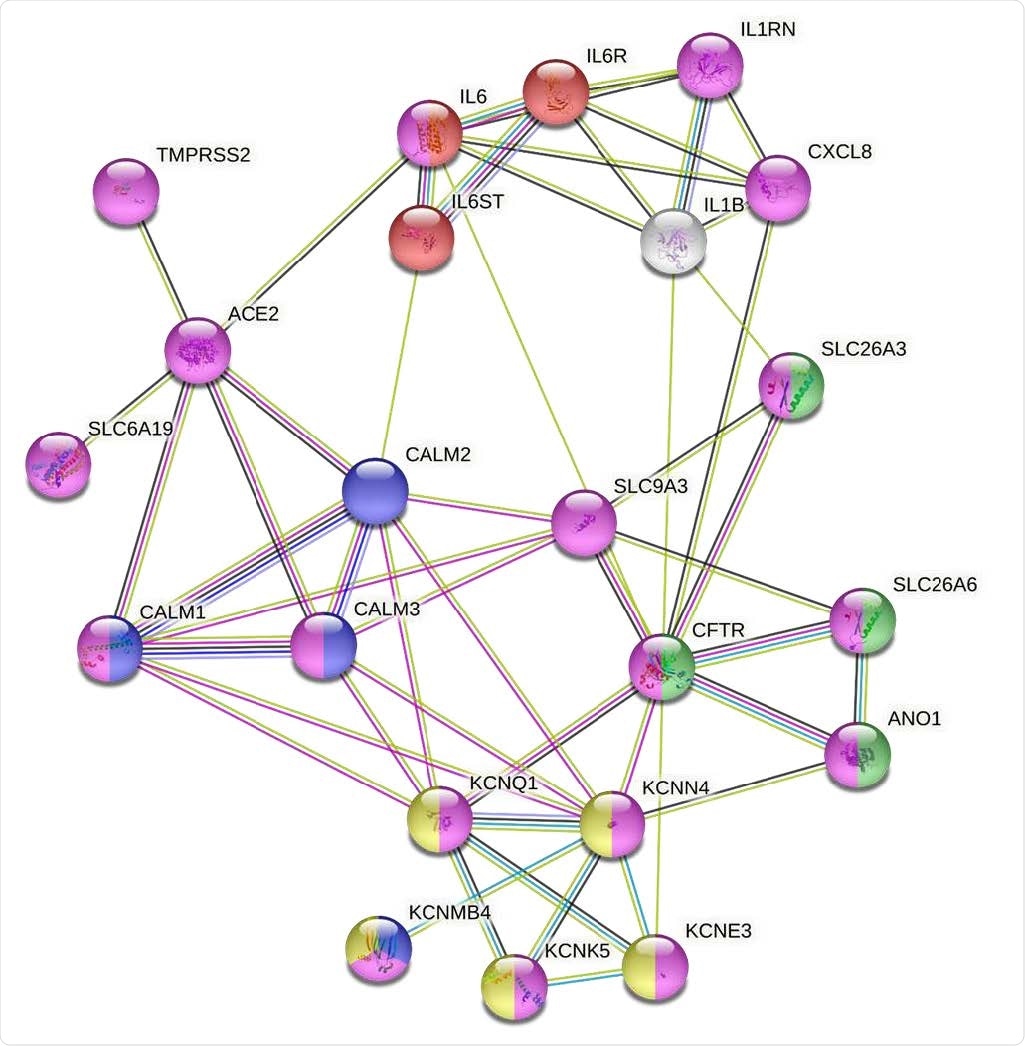 Modeling the molecular mechanisms of SARS-Cov-2 induced diarrhea using a functional interactome created from a small number of proteins that are known to be modulated by the viral infection of human intestinal epithelium (https://string-db.org/). This analysis is based on the most inclusive gene ontology transport pathway (GO:0006810; false discovery rate (FDR) = 2.30e-07); magenta) and includes 21 functionally and physically interacting proteins that are potentially involved in virus-induced signaling that triggers the Isc response in human intestinal epithelium. This model indicates that NHE3 plays a central role in signal transduction between GO:0070102 – the interleukin-6-mediated signaling pathway (red; false discovery rate (FDR)= 4.08e-0 ) and GO:1902476 – chloride secretion (green, FDR = 5.96e-0). This cross-talk between interleukins and Cl secretion might be mediated by PAT-1 in a CFTR-independent or -dependent manner, leading to ANO1 activation. NHE3 is also crucial for the signal transduction from virus receptor ACE2 via intracellular calcium stores to a membrane Cl/bicarbonate transporter and basolateral voltage-gated potassium channel complex (yellow – CL:8927; FDR = 5.91e-07). The IL-6 functional network (red) together with IL-8 (CXCL8) influences the functions of the SARS-Cov-2 receptor complex and membrane transporters (magenta) which cause intestinal anion secretion via CaCC and via the Ca2+ signaling cascade (blue) that affects the activity of Ca2+ – or cAMP-mediated basolateral K+ channels (yellow). Following string colors that connect the proteins represent the interactions based on: turquoise – from curated databases; magenta – experimentally determined; green – gene neighborhood; blue – gene co-occurrence; light green – text mining; black – co-expression; light purple – protein homology.

Since the intestinal mucosal capillaries and lymphatics are found at the base of the epithelial cells, where live virus emerges from the basolateral surface of the enterocytes, these results provide the first evidence that intestinal SARS-CoV-2 infection may be involved in systemic entry of virus via the GI tract.

“Basolateral viral particles (live or not) might contribute to the widespread damage that is part of COVID-19,” suggest the researchers. “However, since systemic infection as part of COVID-19 is not felt to be an important part of the pathophysiology of this disease, the clinical relevance of this observation remains undefined.”

Levels of NHE3 and DRA, which enable NaCl absorption, were also reduced, with levels of NEH3 reduced at both the mRNA and the protein levels.

Findings from the VLP studies

Forty-eight hours following exposure of the enteroid model to VLPs, particles expressing the spike protein were taken up at the enteroid apical surface, which resulted in decreased mRNA levels of NHE3 and DRA. mRNA levels of the cystic fibrosis transmembrane conductance regulator (CFTR) and the human receptor for the viral spike protein – angiotensin-converting enzyme 2 (ACE2) – were also reduced.

The VLPs induced stimulated secretion of Cl via a Ca2+ dependent mechanism that was delayed with a time course that fitted the time for the VLP-induced increase in intracellular Ca2+. This VLP effect consistently required both binding and uptake into the enterocyte.

What do the authors conclude?

“The mechanism of COVID-19 diarrhea appears to require the molecular interplay among inflammatory cytokines, the viral receptor, and several apical and basolateral ion transport proteins as well as activation of intracellular Ca2+ signaling,” says Donowitz and colleagues.

“Even though the characterization of the changes in Na and Cl transport which occur throughout COVID-19 is incomplete, the results obtained already suggest potential drug targets while mechanistic insights may be relevant to SARS-CoV-2 effects on other epithelial cells,” concludes the team.

Sally first developed an interest in medical communications when she took on the role of Journal Development Editor for BioMed Central (BMC), after having graduated with a degree in biomedical science from Greenwich University.