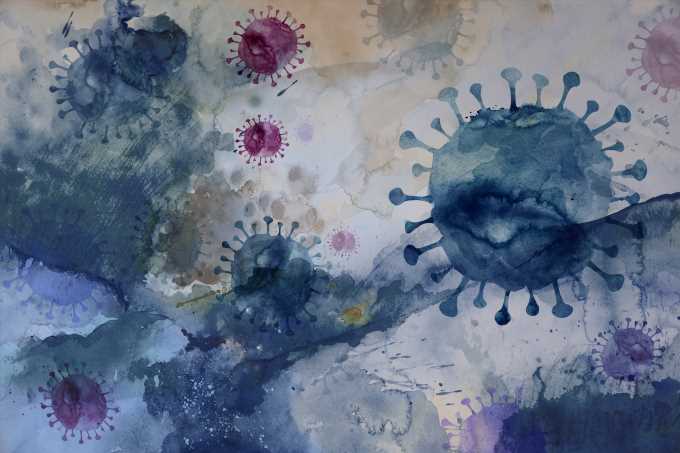 There’s a reason soldiers go through basic training before heading into combat: Without careful instruction, green recruits armed with powerful weapons could be as dangerous to one another as to the enemy.

The immune system works much the same way. Immune cells, which protect the body from infections, need to be “educated” to recognize bad guys — and to hold their fire around civilians.

In some covid patients, this education may be cut short. Scientists say unprepared immune cells appear to be responding to the coronavirus with a devastating release of chemicals, inflicting damage that may endure long after the threat has been eliminated.

“If you have a brand-new virus and the virus is winning, the immune system may go into an ‘all hands on deck’ response,” said Dr. Nina Luning Prak, co-author of a January study on covid and the immune system. “Things that are normally kept in close check are relaxed. The body may say, ‘Who cares? Give me all you’ve got.’”

While all viruses find ways to evade the body’s defenses, a growing field of research suggests that the coronavirus unhinges the immune system more profoundly than previously realized.

Some covid survivors have developed serious autoimmune diseases, which occur when an overactive immune system attacks the patient, rather than the virus. Doctors in Italy first noticed a pattern in March 2020, when several covid patients developed Guillain-Barré syndrome, in which the immune systems attacks nerves throughout the body, causing muscle weakness or paralysis. As the pandemic has surged around the world, doctors have diagnosed patients with rare, immune-related bleeding disorders. Other patients have developed the opposite problem, suffering blood clots that can lead to stroke.

All these conditions can be triggered by “autoantibodies” — rogue antibodies that target the patient’s own proteins and cells.

In a report published in October, researchers even labeled the coronavirus “the autoimmune virus.”

“Covid is deranging the immune system,” said John Wherry, director of the Penn Medicine Immune Health Institute and another co-author of the January study. “Some patients, from their very first visit, seem to have an immune system in hyperdrive.”

Although doctors are researching ways to overcome immune disorders in covid patients, new treatments will take time to develop. Scientists are still trying to understand why some immune cells become hyperactive — and why some refuse to stand down when the battle is over.

Key immune players called “helper T cells” typically help antibodies mature. If the body is invaded by a pathogen, however, these T cells can switch jobs to hunt down viruses, acting more like “killer T cells,” which destroy infected cells. When an infection is over, helper T cells usually go back to their old jobs.

In some people with severe covid, however, helper T cells don’t stand down when the infection is over, said James Heath, a professor and president of Seattle’s Institute for Systems Biology.

About 10% to 15% of hospitalized covid patients Heath studied had high levels of these cells even after clearing the infection. By comparison, Heath found lingering helper T cells in fewer than 5% of covid patients with less serious infections.

In affected patients, helper T cells were still looking for the enemy long after it had been eliminated. Heath is now studying whether these overzealous T cells might inflict damage that leads to chronic illness or symptoms of autoimmune disease.

“These T cells are still there months later and they’re aggressive,” Heath said. “They’re on the hunt.”

Covid appears to confuse multiple parts of the immune system.

In some patients, covid triggers autoantibodies that target the immune system itself, leaving patients without a key defense against the coronavirus.

In October, a study published in Science led by Rockefeller University’s Jean-Laurent Casanova showed that about 10% of covid patients become severely ill because they have antibodies against an immune system protein called interferon.

Disabling interferon is like knocking down a castle’s gate. Without these essential proteins, invading viruses can overwhelm the body and multiply wildly.

New research shows that the coronavirus may activate preexisting autoantibodies, as well as prompt the body to make new ones.

In the January study, half of the hospitalized covid patients had autoantibodies, compared with fewer than 15% of healthy people. While some of the autoantibodies were present before patients were infected with SARS-CoV-2, others developed over the course of the illness.

Other research has produced similar findings. In a study out in December, researchers found that hospitalized covid patients harbored a diverse array of autoantibodies.

While some patients studied had antibodies against virus-fighting interferons, others had antibodies that targeted the brain, thyroid, blood vessels, central nervous system, platelets, kidneys, heart and liver, said Dr. Aaron Ring, assistant professor of immunology at Yale School of Medicine and lead author of the December study, published online without peer review. Some patients had antibodies associated with lupus, a chronic autoimmune disorder that can cause pain and inflammation in any part of the body.

In his study, Ring and his colleagues found autoantibodies against proteins that help coordinate the immune system response. “These are the air traffic controllers,” Ring said. If these proteins are disrupted, “your immune system doesn’t work properly.”

Covid patients rife with autoantibodies tended to have the severest disease, said Ring, who said he was surprised at the level of autoantibodies in some patients. “They were comparable or even worse than lupus,” Ring said.

Although the studies are intriguing, they don’t prove that autoantibodies made people sicker, said Dr. Angela Rasmussen, a virologist affiliated with Georgetown’s Center for Global Health Science and Security. It’s possible that the autoantibodies are simply markers of serious disease.

“It’s not clear that this is linked to disease severity,” Rasmussen said.

The studies’ authors acknowledge they have many unanswered questions.

“We don’t yet know what these autoantibodies do and we don’t know if [patients] will go on to develop autoimmune disease,” said Dr. PJ Utz, a professor of immunology and rheumatology at Stanford University School of Medicine and a co-author of Luning Prak’s paper.

But recent discoveries about autoantibodies have excited the scientific community, who now wonder if rogue antibodies could explain patients’ differing responses to many other viruses. Scientists also want to know precisely how the coronavirus turns the body against itself — and how long autoantibodies remain in the blood.

Scientists working round-the-clock are already beginning to unravel these mysteries.

A study published online in January, for example, found rogue antibodies in patients’ blood up to seven months after infection.

Ring said researchers would like to know if lingering autoantibodies contribute to the symptoms of “long covid,” which afflicts one-third of covid survivors up to nine months after infection, according to a new study in JAMA Network Open.

“Long haulers” suffer from a wide range of symptoms, including debilitating fatigue, shortness of breath, cough, chest pain and joint pain, according to the Centers for Disease Control and Prevention. Other patients experience depression, muscle pain, headaches, intermittent fevers, heart palpitations and problems with concentration and memory, known as brain fog.

The National Institutes of Health has announced a four-year initiative to better understand long covid, using $1.15 billion allocated by Congress.

Ring said he’d like to study patients over time to see if specific symptoms might be explained by lingering autoantibodies.

“We need to look at the same patients a half-year later and see which antibodies they do or don’t have,” he said. If autoantibodies are to blame for long covid, they could “represent an unfortunate legacy after the virus is gone.”

Scientists say the coronavirus could undermine the immune system in several ways.

For example, it’s possible that immune cells become confused because some viral proteins resemble proteins found on human cells, Luning Prak said. It’s also possible that the coronavirus lurks in the body at very low levels even after patients recover from their initial infection.

For example, the Epstein-Barr virus, best known for causing mononucleosis, has been linked to lupus and other autoimmune diseases. The bacteria that cause strep throat can lead to rheumatic fever, an inflammatory disease that can cause permanent heart damage. Doctors also know that influenza can trigger an autoimmune blood-clotting disorder, called thrombocytopenia.

Researchers are now investigating whether autoantibodies are involved in other illnesses — a possibility scientists rarely considered in the past.

Doctors have long wondered, for example, why a small number of people — mostly older adults — develop serious, even life-threatening reactions to the yellow fever vaccine. Three or four out of every 1 million people who receive this vaccine — made with a live, weakened virus — develop yellow fever because their immune systems don’t respond as expected, and the weakened virus multiplies and causes disease.

In a new paper in the Journal of Experimental Medicine, Rockefeller University’s Casanova has found that autoantibodies to interferon are once again to blame.

“If you have these autoantibodies and you are vaccinated against yellow fever, you may end up in the ICU,” Casanova said.

Casanova’s lab is now investigating whether autoantibodies cause critical illness from influenza or herpes simplex virus, which can cause a rare brain inflammation called encephalitis.

Researchers are looking for ways to treat patients who have interferon deficiencies — a group at risk for severe covid complications.

In a small study published in February in the Lancet Respiratory Medicine, doctors tested an injectable type of interferon — called peginterferon-lambda — in patients with early covid infections.

People randomly assigned to receive an interferon injection were four times more likely to have cleared their infections within seven days than the placebo group. The treatment, which used a type of interferon not targeted by the autoantibodies Casanova discovered, had the most dramatic benefits in patients with the highest viral loads.

Lowering the amount of virus in a patient may help them avoid becoming seriously ill, said Dr. Jordan Feld, lead author of the 60-person study and research director at the Toronto Centre for Liver Disease in Canada. In his study, four of the placebo patients went to the emergency room because of breathing issues, compared with only one who received interferon.

“If we can bring the viral levels down quickly, they might be less infectious,” Feld said.

Doctors could potentially treat patients with a single injection with a small needle — like those used to administer insulin — in outpatient clinics, Feld said. That would make treatment much easier to administer than other therapies for covid, which require patients to receive lengthy infusions in specialized settings.

Many questions remain. Dr. Nathan Peiffer-Smadja, a researcher at the Imperial College London, said it’s unclear whether this type of interferon does improve symptoms.

Similar studies have failed to show any benefit to treating patients with interferon, and Feld acknowledged that his results need to be confirmed in a larger study. Ideally, Feld said, he would like to test interferon in older patients to see whether it can reduce hospitalizations.

“We’d like to look at long haulers, to see if clearing the virus quickly could lead to less immune dysregulation,” Feld said. “People have said to me, ‘Do we really need new treatments now that vaccines are rolling out?’ Unfortunately, we do.”