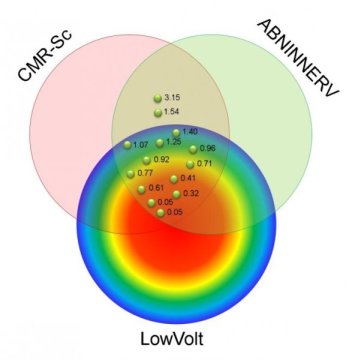 Ventricular arrhythmias, or abnormal heartbeats originating from the bottom chambers of the heart, are the main cause of sudden cardiac death in the United States and are responsible for up to 300,000 deaths each year. Ablation of ventricular tachycardia is a proven treatment for arrhythmias in patients with a history of heart attacks. Identifying the area of the increased scar tissue that is responsible for the current arrhythmia and possible future arrhythmias has been challenging, with up to 50% of patients suffering a recurrence during the 6 months following the ablation. “The amount of scar tissue can often account for more than half of the left ventricle myocardium,” noted Timm Dickfeld, MD, PhD, FACC, FHRS, director of electrophysiology research at the University of Maryland School of Medicine. “Ablating such a large amount of the myocardium is often not desirable and very time-intensive.”

In the study, researchers followed 15 patients with ischemic cardiomyopathy who were scheduled for radiofrequency ablation for drug-refractory VT. Each patient underwent imaging with 123I-MIBG SPECT and cardiac MRI, as well as high-resolution bipolar voltage mapping. These three mapping tools assessed various adaptations found in VT: abnormal innervation, tissue scarring and low-voltage area, respectively. The adaptations were then compared to determine which were present in the affected heart tissue.

“Results from this study show that nuclear medicine can be used to develop novel, cutting-edge strategies for risk stratification and arrhythmia treatment,” said Dickfeld. “The study highlights the importance of close collaboration among the nuclear medicine, radiology and electrophysiology departments, which we are lucky to have at the University of Maryland, to move the field forward. We hope that we can build on the insights provided by this research to develop new treatment algorithms that will result in potentially shorter and more efficient treatment of patients with ventricular arrhythmias.”

This study was made available online in June 2018 ahead of final publication in print in January 2019.