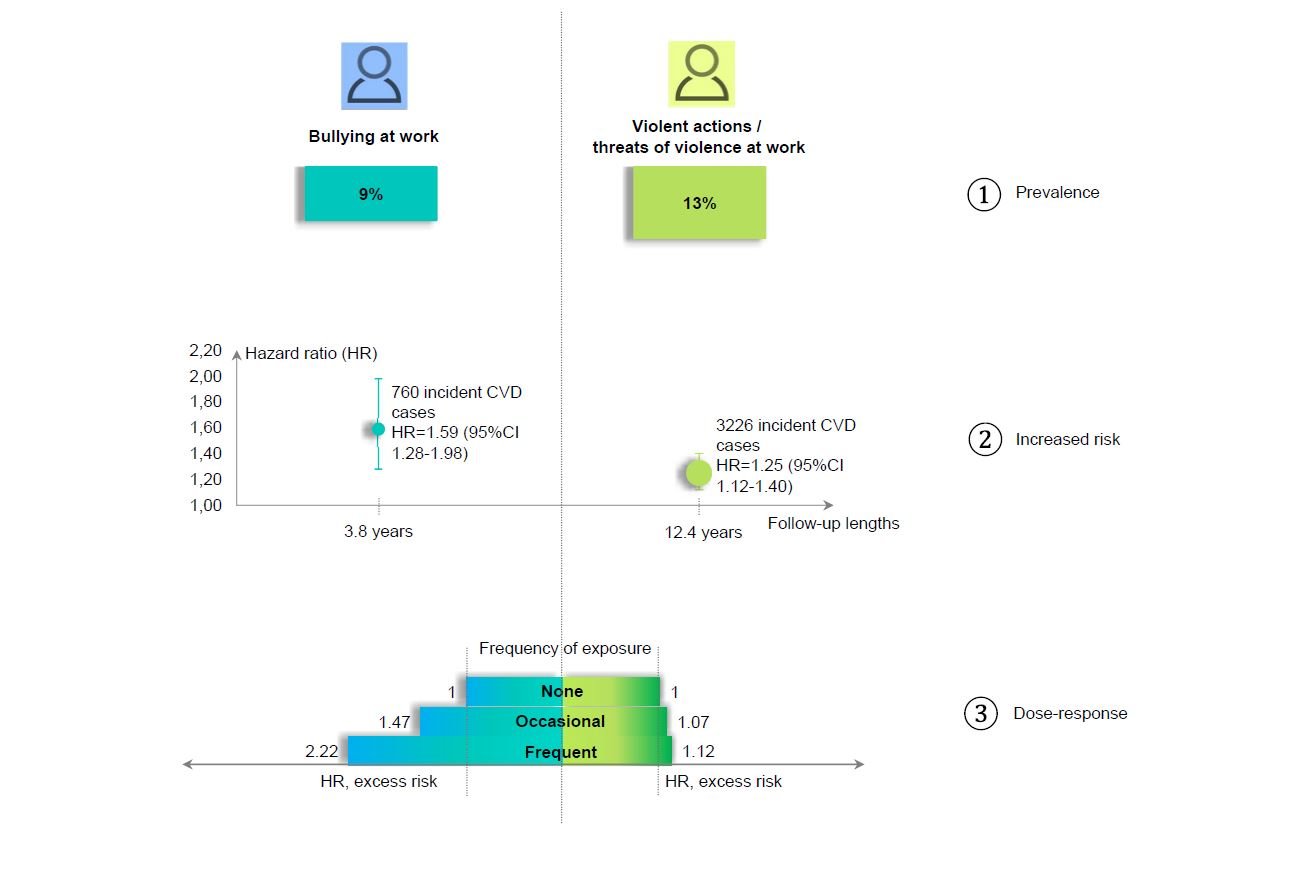 People who are bullied at work or experience violence at work are at higher risk of heart and brain blood vessel problems, including heart attacks and stroke, according to the largest prospective study to investigate the link, which is published in the European Heart Journal today.

Although the study is observational and, therefore, cannot show that workplace bullying or violence cause cardiovascular problems, only that there is an association, the researchers say their results are robust and have important implications for employers and national governments.

Ms Tianwei Xu, a Ph.D. student at the University of Copenhagen, Denmark, who led the study, said: “If there is a causal link between bullying or violence at work and cardiovascular disease, then the removal of workplace bullying would mean we could avoid five per cent of all cardiovascular cases, and the eradication of violence at work would avoid more than three per cent of all cases.”

The researchers looked at data from 79,201 working men and women in Denmark and Sweden, aged 18 to 65, with no history of cardiovascular disease (CVD), who were participants in three studies that started between 1995 and 2011; the participants have been followed up ever since. When they joined the studies, the participants were asked about bullying and violence in the workplace and how frequently they experienced each of them. Information on the number of cases of heart and brain blood vessel disease and deaths was obtained from nationwide registries.

Ms Xu and her colleagues also took account of other factors that could affect whether or not the participants were affected by CVD, such as body mass index, alcohol consumption, smoking, mental disorders and other pre-existing health conditions, shift working and occupation.

Nine per cent of participants reported being bullied at work and 13% reported experiencing violence or threats of violence at work in the past year. After adjusting for age, sex, country of birth, marital status and level of education, the researchers found that those who were bullied or experienced violence (or threats of violence) at work had a 59% and 25% higher risk of CVD respectively compared to people who were not exposed to bullying or violence. The more bullying or violence that was encountered, the greater the risk of CVD. Compared with people who did not suffer bullying, people who reported being bullied frequently (the equivalent to being bullied almost every day) in the past 12 months had 120% higher risk of CVD, while those who were exposed most frequently to workplace violence had a 36% higher risk of cerebrovascular disease (such as stroke) than those not exposed to violence, but there did not appear to be a corresponding increase in heart disease.

Ms Xu said: “Workplace bullying and workplace violence are distinct social stressors at work. Only 10-14% of those exposed to at least one type of exposure were suffering from the other at the same time. These stressful events are related to a higher risk of cardiovascular disease in a dose-response manner—in other words, the greater the exposure to the bullying or violence, the greater the risk of cardiovascular disease.

“From this study we cannot conclude that there is a causal relation between workplace bullying or workplace violence and cardiovascular disease, but we provide empirical evidence in support of such a causal relation, especially given the plausible biological pathway between workplace major stressors and cardiovascular disease. This is further supported by the dose-response trend and the robustness of the results in various sensitivity analyses. Experimental studies on violence and bullying would be highly unethical and our study thus provides the best evidence of this association.

“It is important to prevent workplace bullying and workplace violence from happening, as they constitute major stressors for those exposed. It is also important to have policies for intervening if bullying or violence occurs.”

The researchers are currently investigating what mechanisms, behavioural and biological, may be involved in increasing the risk of CVD in people who experience workplace bullying or violence. They believe that high blood pressure is likely to be involved as it is known already that severe stress can increase blood pressure. In addition, exposure to bullying and violence may lead to anxiety and depression which, in turn, can lead to over-eating and excessive alcohol consumption. Stress-induced changes to metabolism could also be involved.

Other interesting findings from the research included the fact that bullying in the workplace occurred mostly from colleagues (79%) rather than from people outside the organisation (21%), whereas violence or threats of violence at work originated mainly from people outside the organisation (91%), than from within (9%). This, combined with the fact that those exposed most frequently to workplace violence were not more likely to suffer from heart disease, suggests that workers may have received training about how to deal with violence they encounter as part of their jobs and may be better equipped to deal with it and avoid long-term consequences.

Limitations of the study include the fact that workplace bullying and violence was measured only once; that the research was carried out in Scandinavian countries where the concepts of workplace bullying and violence are well-established, meaning that caution is needed when extrapolating the findings to other countries and cultures; and that some information, such as the use of tobacco other than smoking (for example, the use of snus), personality traits, genetic factors and other stressors (such as marital conflict) was not available.

In an accompanying editorial [2], Professor Christoph Herrmann-Lingen, director of the Department of Psychosomatic Medicine and Psychotherapy at the University of Göttingen Medical Centre, Göttingen, Germany, warns that “the findings need cautious interpretation and independent replication”.

He points out that a number of factors can play a role in the development of cardiovascular disease, including the environment and events in a person’s early life, how they cope with stress, and pre-existing psychological problems, all of which could affect the way they behave in the workplace and respond to situations encountered there.

He writes: “We therefore do not know to what degree the increased CVD incidence was driven by objective events (that could best be prevented by workplace interventions), subjective perceptions of the events, and psychobiological reactions to them (which might require efforts addressing individual stress resilience and coping) or pre-existing psychological conditions (which are per se associated with increased CVD risk and would call for early recognition, treatment, or even prevention of the underlying problems).”