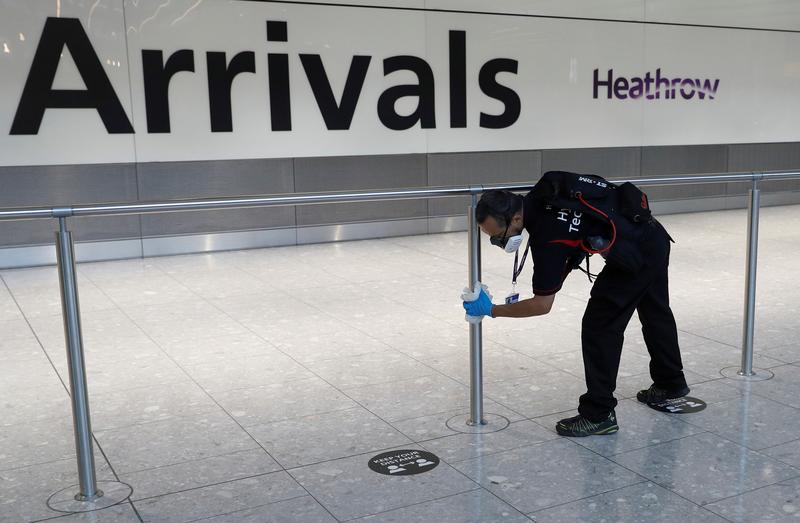 LONDON (Reuters) -The British government will set out measures to boost international travel later on Friday, helping airlines and holiday companies which say they will not survive another winter of onerous rules and red tape.

While Europe has relaxed travel restrictions for the fully vaccinated, expensive COVID-19 testing requirements remain in place for fully vaccinated arrivals into Britain, holding back a travel recovery as the tougher winter period nears.

Shapps sets policy for England, with Scotland, Wales and Northern Ireland in charge of their own rules.

Travel shares, which were already trading higher on hopes of a rule change, jumped further. British Airways-owner IAG was up 6%, TUI traded up 5%, easyJet was up 3%, Jet2 6% higher and On the Beach up 11%.

The Prime Minister Boris Johnson hinted earlier in the week that a change was likely, and there have been reports that popular destination Turkey may be opened up for British travellers again.

“There are hundreds of businesses out there who will not survive this winter unless changes are made,” TUI UK managing director Andrew Flintham told Sky News on Friday.

The industry, already on its knees after 18 months of restrictions, is facing a cliff edge as the government’s furlough scheme ends later this month with winter approaching, when fewer people travel and businesses tend to make a loss.

Shapps’s simplification plan suggests that the so-called traffic light system which ranks destinations as green, amber and red, could go.

By reducing costs he could mean that the government will remove the requirement for fully vaccinated travellers to take a lateral flow test before departing their destination and a costly PCR test on their return into Britain, which can add hundreds of pounds per person to a trip.

Media reports have said that destinations will simply be ranked low or high risk, instead of red, amber and green and that many countries, including Turkey, will be removed from the high risk red list which currently includes 62 destinations.

Data shows that Britain’s travel recovery is lagging. UK flights were down 39% compared to pre-pandemic levels for the two weeks to early Sept. 6, while France, Spain and Italy were down between 24-28%, according to Eurocontrol.

Quarantine hotels, where people spend 11 nights in a designated facility at a cost of more than 2,000 pounds, are expected to remain in place for arrivals from high risk countries.