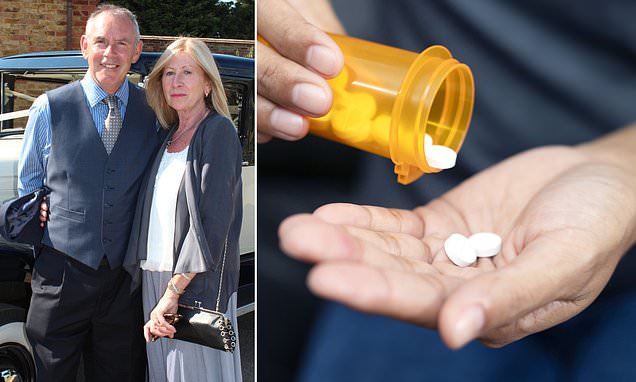 A ‘landmark’ drug which buys time for women by halting advanced breast cancer could benefit around thousands of women each year.

In a trial of more than 700 people, the drug shrank the tumours of almost a quarter of those given it, and doubled the time before the cancer progressed.

Those taking the drug, called Capivasertib, alongside hormone therapy, had just over seven months on average without their cancer progressing or getting worse.

That compared to just over three-and-a-half months for people on the current standard treatment of hormone therapy alone. 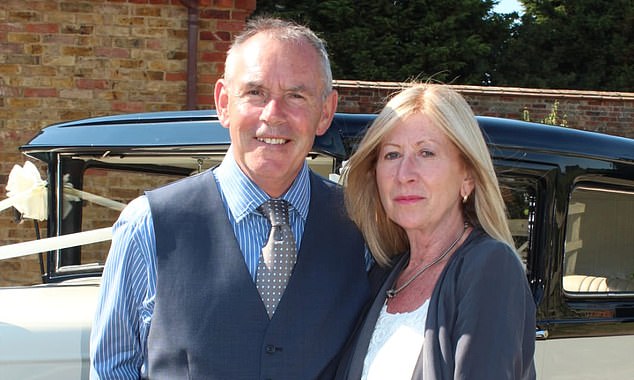 A British member of the trial of Capivasertib, 65-year-old Linda Kelly, said the drug had given her the confidence to ‘live life to the full’ and get married to her partner of 20 years. Pictured with husband Neil 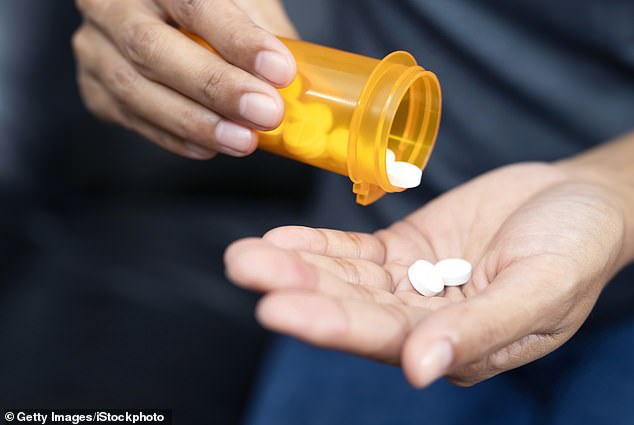 Capivasertib, taken as a tablet twice a day for four days a week, is one of an entirely new class of drugs which work differently to existing breast cancer therapies, by turning off a cellular ‘switch’ which helps fuel cancer growth. Pictured: stock of woman with pills in hand 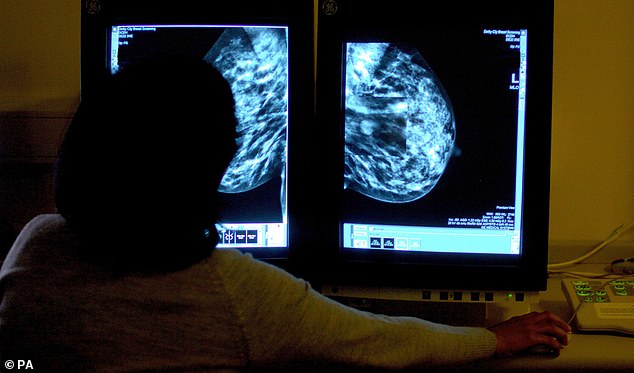 In a trial of more than 700 people, the drug shrank the tumours of almost a quarter of those given it, and doubled the time before the cancer progressed. Pictured: a consultant studying a mammogram of a woman’s breast

The drug could be a lifeline for women with breast cancer which has spread, or travelled to different parts of the body like the liver or brain, and who have run out of all NHS treatments besides gruelling chemotherapy.

A British member of the trial of Capivasertib, 65-year-old Linda Kelly, said the drug had given her the confidence to ‘live life to the full’ and get married to her partner of 20 years.

Capivasertib, taken as a tablet twice a day for four days a week, is one of an entirely new class of drugs which work differently to existing breast cancer therapies, by turning off a cellular ‘switch’ which helps fuel cancer growth.

It is a new line of attack, and the first of this type of drug to be found to work so effectively in a large trial, according to British researchers.

They say the results are strong enough to now submit to the regulator, the Medicines and Healthcare products Regulatory Agency (MHRA).

A wedding is one of the happiest outcomes of the global trial of capivasertib.

Linda Kelly, 65, who was diagnosed with advanced breast cancer in September 2019, often felt unable to travel because of side effects from her illness and treatment.

But the new drug, with moderate and manageable side effects, not only shrunk the tumour in her liver down to nothing, but gave her the confidence to go on a honeymoon.

She married her partner of 22 years, Neil, on October 19 last year, with two witnesses, and they set off to Jersey afterwards, calling their family to tell them about the surprise wedding.

Mrs Kelly, from Milton Keynes, said: ‘I had a great honeymoon, walking for miles, then a post-wedding holiday in the south of France cycling and going on boat trips.

‘I felt a bit tired from time to time but this drug has enabled me to live a normal life.

‘My future is still uncertain, but I now have the confidence to live to the full.’

It is more than two decades since Mrs Kelly was first diagnosed with breast cancer in the year 2000.

She had a single mastectomy, radiotherapy and chemotherapy, before being put on hormone therapy for five years.

Mrs Kelly, who also had thyroid cancer in 2014, always knew there was a chance her breast cancer would come back.

Then she got the diagnosis, that she had advanced breast cancer, which had spread to her bones and chest wall.

She said: ‘I was scared at first when I was given the diagnosis, having nursed my mother through cancer until the end.

‘But, unbelievable as it may sound, this drug has made me feel fit and healthy again.’

The cancer was initially treated successfully with targeted drug therapy but after 18 months the disease had progressed to her liver and Mrs Kelly signed up to the capivasertib trial at the Royal Marsden last August.

She said: ‘The results have been amazing. ‘There has been a substantial reduction in my disease, my cancer has not progressed, and I haven’t had any new tumours.

‘When I was told the tumour in my liver was shrinking, in November last year, it was the best wedding gift I could have asked for.

‘I’m so grateful to the Royal Marsden for their expertise and humanity – I owe my life to them.’

If approved by the regulator, and then drug watchdog the National Institute for Health and Care Excellence, the new drug could be available on the NHS in the near future.

They hope the drug could in future help women newly diagnosed with breast cancer – around 70 per cent of whom have the type of breast cancer targeted in the trial, known as oestrogen receptor (ER) positive, human epidermal growth factor receptor 2 (HER-2) negative breast cancer.

Nick Turner, professor of molecular oncology at the Institute of Cancer Research (ICR) in London, who led the global trial of Capivasertib, including patients at the Royal Marsden, where he is a consultant oncologist, said: ‘This is a fantastic finding for patients with breast cancer.

‘Even with the best current treatments, people with this type of advanced breast cancer will eventually see their cancer stop responding to treatment, and it will progress.

‘We’re delighted that this potential first-in-class drug combined with hormone therapy can lower the progression of these advanced cancers, and in almost a third of cases can shrink tumours.

‘We believe this new treatment could allow more women and men to live well and live longer with breast cancer.’

Professor Kristian Helin, chief executive of the ICR, said: ‘This is a landmark moment for the treatment of advanced forms of the most common type of breast cancer.

‘Capivasertib could offer a completely new treatment option for these patients.

‘This is a major success story for UK science.’

Women with the most common form of breast cancer, ER-positive, HER2-negative breast cancer, are reliant on hormone therapy to block oestrogen in their body which fuels the cancer.

This can give them months or years longer to live, but many women eventually find the treatment no longer works, as their cancer becomes resistant to the tablets.

Many women in the trial could no longer use hormone pills for this reason.

Capivasertib is an answer to this problem, as it targets a completely different way in which cancer grows and spreads – by turning off a ‘switch’ called AKT which allows cancer cells to rapidly divide.

The trial gave 355 people the drug, with 353 receiving dummy pills instead.

All the cancer patients in the trial also received fulvestrant – a hormone therapy which is used after people become resistant to anastrazole, but which does not work well on its own for many women.

The results showed that patients given capivasertib and fulvestrant had an average of 7.2 months without their cancer progressing, compared to 3.6 months for patients treated with dummy pills and fulvestrant.

A longer follow-up is needed to see if the drug also lengthens the lives of women with advanced breast cancer.

But there is great hope from the findings, presented at the San Antonio Breast Cancer Symposium this week.

There are currently trials running using capivasertib for other types of cancer, including prostate cancer.

Professor Helin said: ‘The existing findings are already strong enough for capivasertib to be submitted to regulators to be considered for approval as a new breast cancer treatment.’

All the women and men in the trial of capivasertib, which is manufactured by drug company AstraZeneca, had seen their cancer recur or progress on standard hormone treatments.

The majority had also previously been treated with CDK4/6 inhibitors – drugs that block cancer cells from multiplying – but still the cancer had come back or kept getting worse.

The patients would normally be offered fulvestrant hormone therapy, but because it is often not effective, many would be left only with the option of chemotherapy.

The development of capivasertib followed years of fundamental research at ICR, aimed at understanding the precise structure of the AKT switch.

The most common side effects of the drug included a rash and diarrhoea.

Dr Kotryna Temcinaite, senior research communications manager at Breast Cancer Now, said: ‘Understanding how we can keep incurable breast cancer under control when it stops responding to existing treatments is vital to help more people live longer with the disease.

‘These encouraging results suggest a new way to treat patients with advanced ER positive HER2 negative breast cancer giving them precious extra time with their loved ones before the disease progresses.

‘We hope that people can start benefiting from this treatment combination as soon as possible.’

What is breast cancer?

Breast cancer develops from a cancerous cell which develops in the lining of a duct or lobule in one of the breasts.

When the breast cancer has spread into surrounding breast tissue it is called an ‘invasive’ breast cancer. Some people are diagnosed with ‘carcinoma in situ’, where no cancer cells have grown beyond the duct or lobule.

Most cases develop in women over the age of 50 but younger women are sometimes affected. Breast cancer can develop in men though this is rare.

Staging means how big the cancer is and whether it has spread. Stage 1 is the earliest stage and stage 4 means the cancer has spread to another part of the body.

The cancerous cells are graded from low, which means a slow growth, to high, which is fast growing. High grade cancers are more likely to come back after they have first been treated.

A cancerous tumour starts from one abnormal cell. The exact reason why a cell becomes cancerous is unclear. It is thought that something damages or alters certain genes in the cell. This makes the cell abnormal and multiply ‘out of control’.

Although breast cancer can develop for no apparent reason, there are some risk factors that can increase the chance of developing breast cancer, such as genetics.

What are the symptoms of breast cancer?

The usual first symptom is a painless lump in the breast, although most breast lumps are not cancerous and are fluid filled cysts, which are benign.

The first place that breast cancer usually spreads to is the lymph nodes in the armpit. If this occurs you will develop a swelling or lump in an armpit.

How is breast cancer diagnosed?

If you are confirmed to have breast cancer, further tests may be needed to assess if it has spread. For example, blood tests, an ultrasound scan of the liver or a chest x-ray.

How is breast cancer treated?

Treatment options which may be considered include surgery, chemotherapy, radiotherapy and hormone treatment. Often a combination of two or more of these treatments are used.

How successful is treatment?

The outlook is best in those who are diagnosed when the cancer is still small, and has not spread. Surgical removal of a tumour in an early stage may then give a good chance of cure.

The routine mammography offered to women between the ages of 50 and 70 mean more breast cancers are being diagnosed and treated at an early stage.

For more information visit breastcancernow.org or call its free helpline on 0808 800 6000