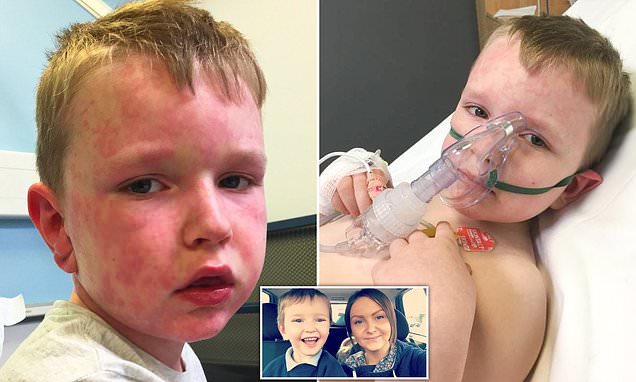 The boy allergic to WINTER: Seven-year-old with rare condition breaks out in a rash, vomits and struggles to breathe when he gets cold

A seven-year-old boy with a rare condition is hospitalised over the winter because the cold triggers an allergic reaction.

Tommy Leitch had to be hospitalised every month last winter because he would vomit, struggle to breathe and break out in a rash from head to toe if he got too cold.

The schoolboy suffers with severe urticaria and angioedema, conditions which cause hives and swelling beneath the skin.

His mother, Abigail McDonald, 26, said she can’t even wrap her son up in multiple layers to keep him warm – because his allergy is also triggered by heat.

She is constantly worried her son’s life is under threat because he needs medication urgently when his symptoms appear.

In some cases urticaria can lead to anaphylactic shock and angioedema causes the tongue to swell, restricting airways. 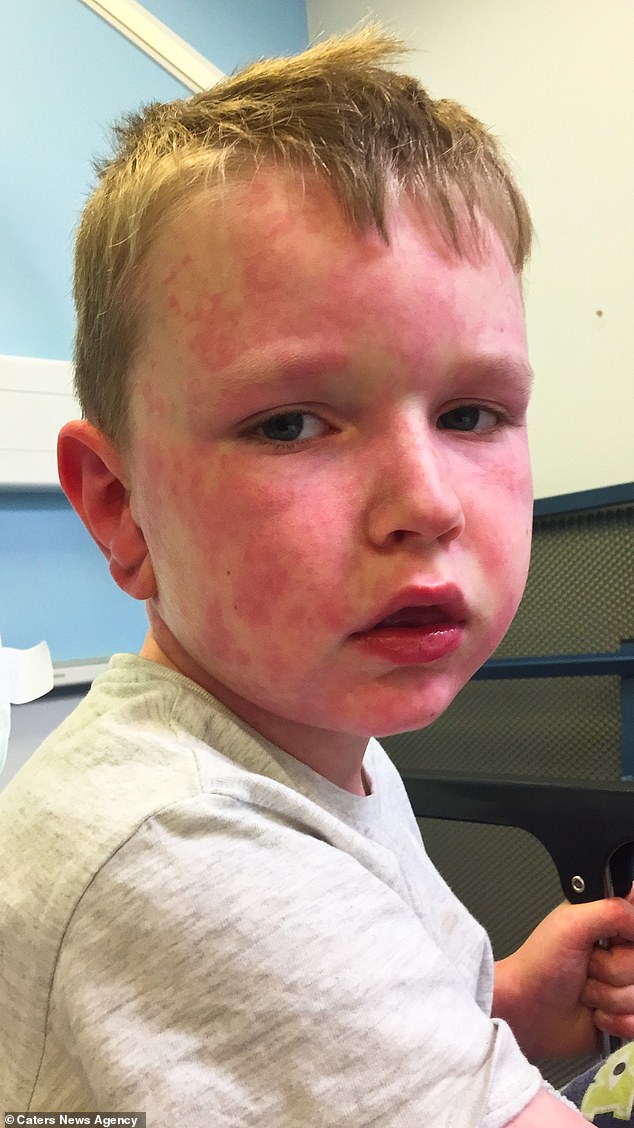 Tommy Leitch, seven, is ‘allergic to winter’ due to rare conditions urticaria and angioedema 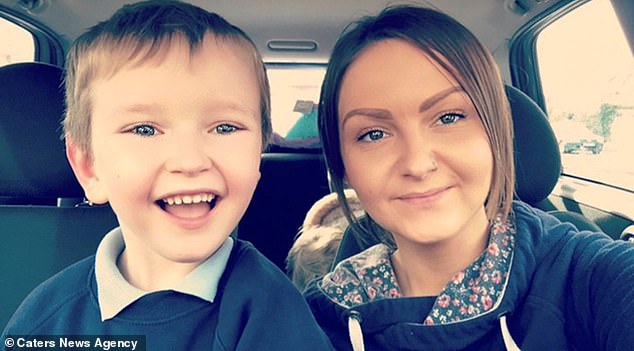 His mother, Abigail McDonald, 26, is constantly worried her son’s life is under threat because he needs medication urgently when his symptoms appear 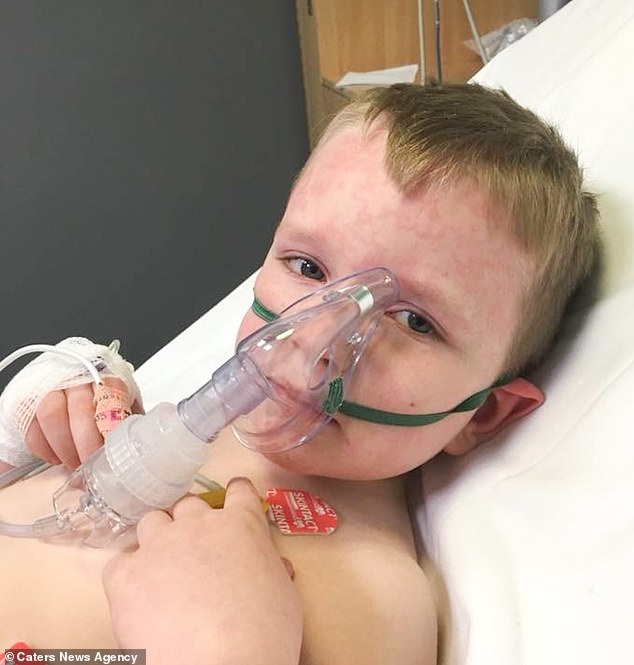 Tommy had to be hospitalised every month last winter because he would vomit, struggle to breathe and break out in a rash if he got too cold

Ms McDonald, a mother-of-two from Amersham, Buckinghamshire, said: ‘ ‘Last winter he was hospitalised every month as his allergic reaction caused him to violently vomit, struggle to breathe and was delirious.

‘It’s a horrific condition and I always panic about it as it can be life threatening if Tommy doesn’t get urgent medical attention.

‘It is heartbreaking to witness my little boy with an oxygen mask on and with wires hanging off him in hospital but he is so brave.’

Ms McDonald first noticed a tiny rash on Tommy’s head when he was five years old.

She said: ‘I thought it was just a viral infection but the next morning he was covered from head to toe and complaining of stomach and chest pains with a swollen face and stomach.

‘We immediately took him to the hospital, and he was given anti-histamines and adrenaline and we were referred to a dermatologist who diagnosed him with cold urticaria and angioedema.’

Urticaria, also known as hives, affects about one in five people at some point in their lives, according to The British Skin Foundation. 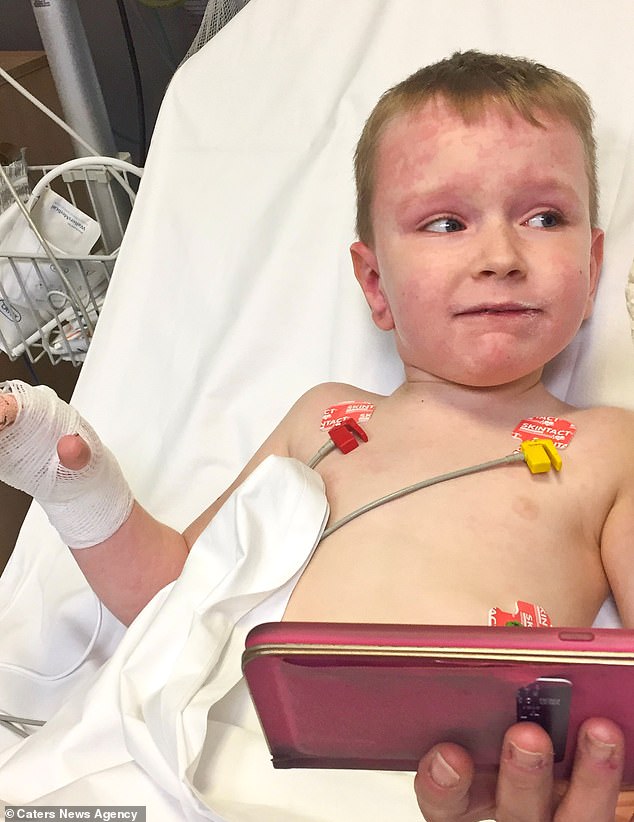 Ms McDonald said it’s heartbreaking to see her son in hospital, sometimes with an oxygen mask 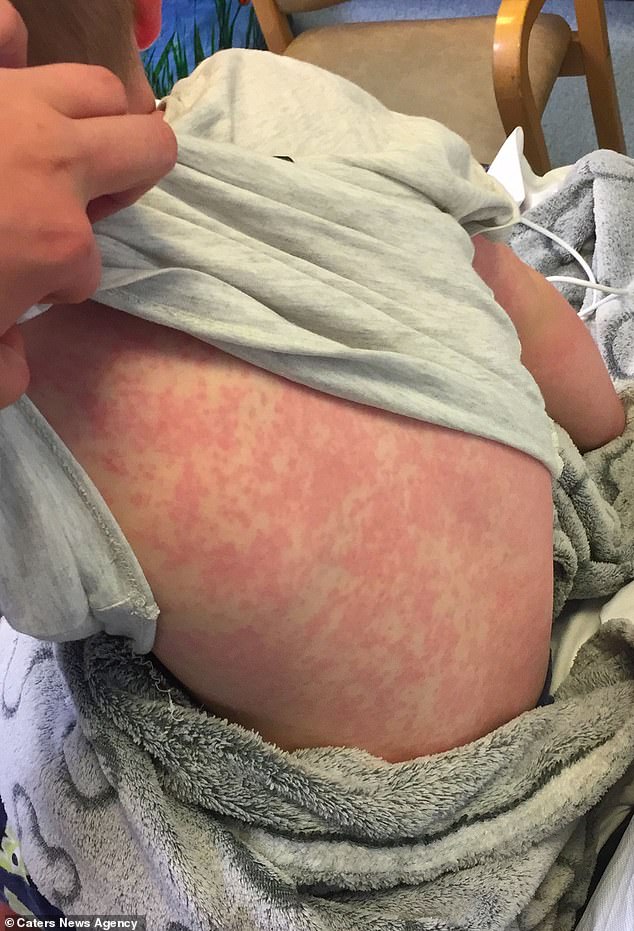 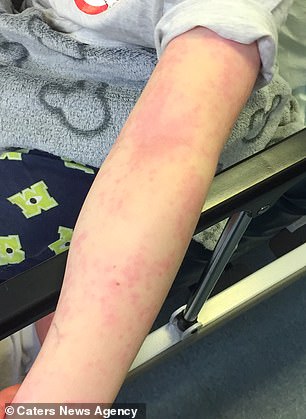 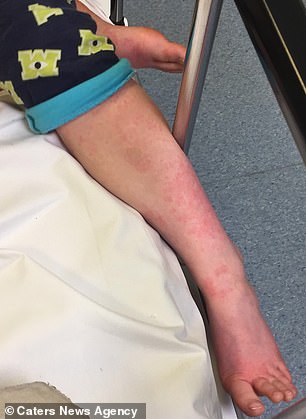 Urticaria is also known as hives and can be triggered by the weather, sun or even water 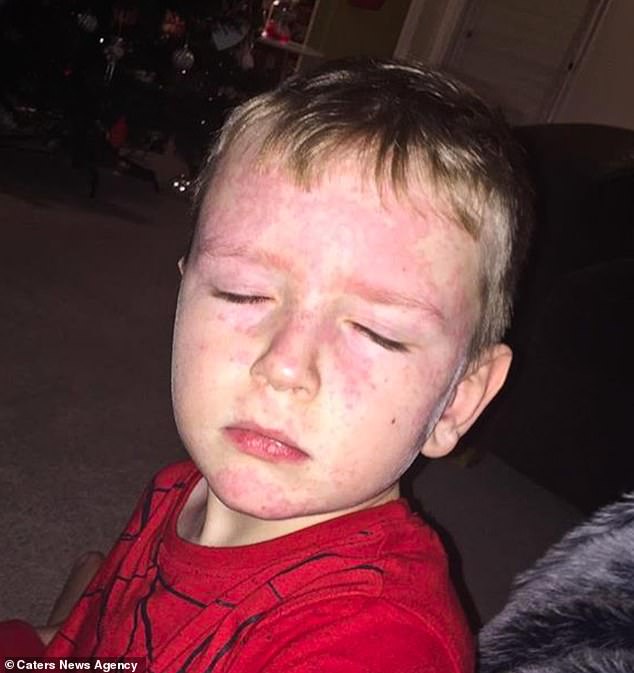 Most of the time, the cause is unknown. But it could be triggered by heat, cold, friction, pressure on the skin, sun and even water.

Cold-induced urticaria makes up about one to three per cent of all urticaria cases, according to the National Organisation of Rare Disorders.

Patients are advised to go to A&E if they have difficulty breathing, swallowing, dizziness or are vomiting, as this can be a sign of anaphylactic shock, the NHS say.

Angioedema is similar to hives, but the swelling occurs beneath the skin, such as around the eyes, lips and sometimes hands feet and the tongue.

Angioedema is estimated to affect one in 50,000 people, according to the US National Library of Medicine.

Ms McDonald said: ‘I am always on guard as we never know when it is going to happen which makes it even scarier. 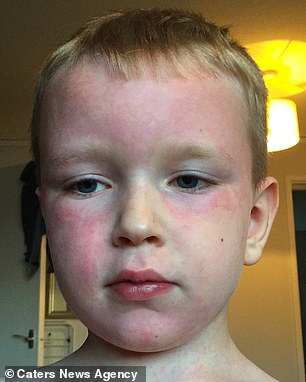 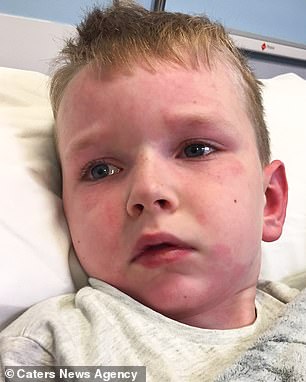 ‘As the years have gone on, we have noticed it is both hot and cold weather conditions that cause him to have a flare up.’

The unpredictable flare ups have put a strain on family activities because Ms McDonald is often too ‘anxious’ in case Tommy has a reaction.

She and her partner Ben Leitch, 32, have postponed their dream wedding abroad as they are frightened the urticaria and angioedema will flare up.

Ms McDonald said: ‘He has missed out on lots of play dates with his friends and as a family we have been unable to go on holiday or on day trips as I am too anxious in case it happens when we are on the plane or abroad.’

Treatment for urticaria and angioedema involves anti-histamines and oral steroids or injections in severe cases. 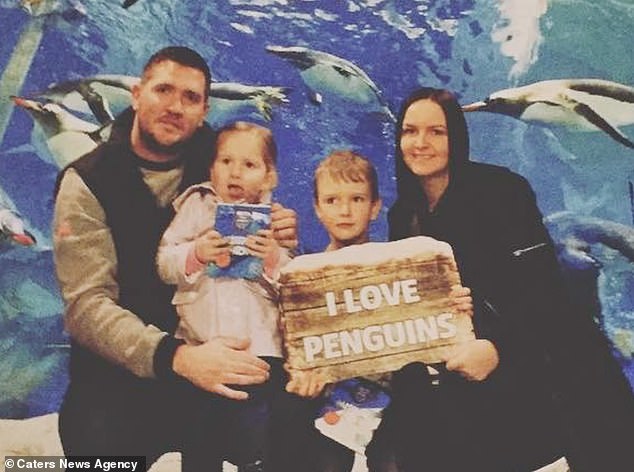 Ms McDonald and her partner Ben Leitch, 32, have postponed their dream wedding abroad as they are frightened the urticaria and angioedema will flare up. Pictured with Tommy and his sister 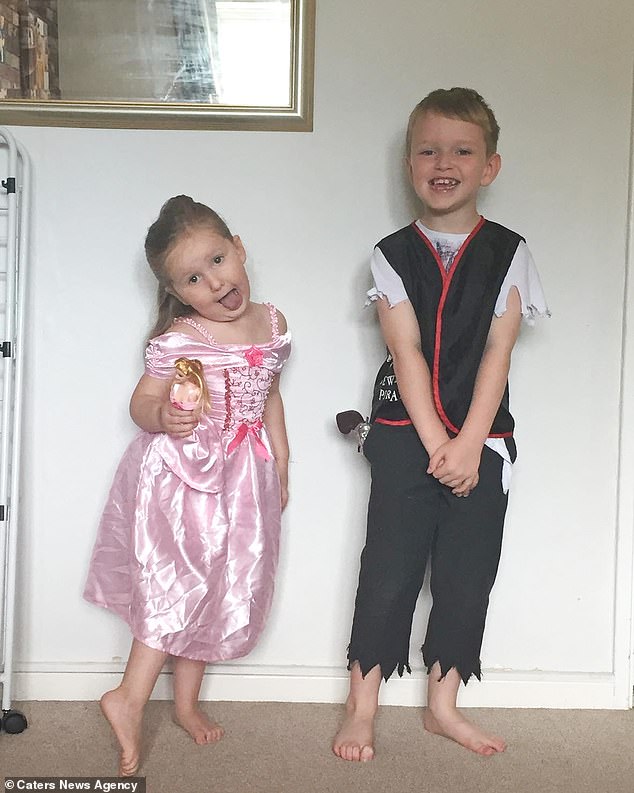 Tommy must wear suitable clothing in summer and winter to try and avoid reaction. He is pictured with his sister 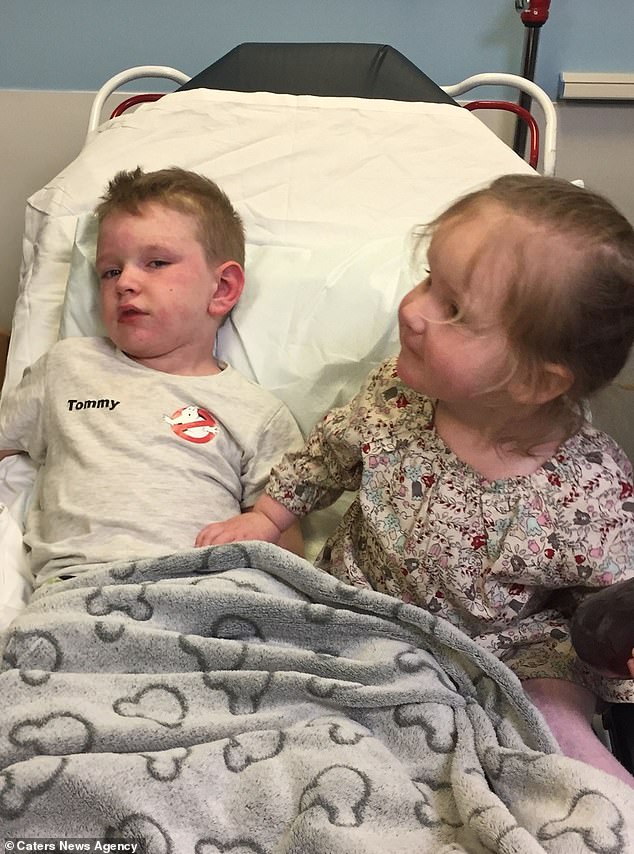 Ms McDonald said she had to turn to Facebook groups for help because there was no information at her local GP surgery. Her two children are pictured in hospital

Tommy must always stay around 20°C because if he is exposed to a temperature too low or high then his skin begins to break out.

His mother ensures he wears suitable clothing in summer and winter to try and avoid reaction.

He can wear a coat and t-shirt during the winter and must avoid fleecy pyjamas at night as he will overheat.

During the summer, he wears UV swimwear and spends no longer than 20 minutes outside in both weather conditions.

Tommy is now able to recognise the first stages of a flare up and requests an anti-histamine from Ms McDonald, but often he still ends up in hospital.

She said: ‘I had no idea people could be allergic to temperatures before Tommy which I think makes it even more difficult.

‘There aren’t any leaflets in my local GP so I have had to turn to Facebook support groups to learn more and try and find remedies on how to reduce the flare ups.’

WHAT IS URTICARIA AND ANGIOEDEMA?

Urticaria, also known as hives, affects about one in five people at some point in their lives, according to The British Skin Foundation.

Cold urticaria is a skin reaction that causes it to break out in hives when exposed to low temperatures.

Other symptoms include swelling of the hands when holding cold objects, and the lips and throat when drinking chilled beverages.

In severe cases when the entire body is affected, sufferers may experience fainting, a racing heart, shock, and swelling of the tongue and throat, which can prevent breathing.

Anyone can develop cold urticaria, however, people are more at risk if they are young, have recently had an infection, have an underlying condition or have inherited certain genetic traits.

Cold urticaria often goes away on its own but can be treated via antihistamines and avoiding temperatures below 39°F (4°C).

Essential cold urticaria makes up about one to three per cent of all urticaria cases, according to the National Organisation of Rare Disorders.

It isn’t normally serious, but it can be a recurring problem for some people and can very occasionally be life-threatening if it affects breathing.

The swelling most often affects the hands, feet, area around the eyes, lips and tongue and genitals.

There are several different types of angioedema, each of which has a different cause, such as an allergy to food, medication or genetic fault.

But in many cases, it’s not clear what causes angioedema. This is known as idiopathic angioedema.

Urticaria and angioedema often occur at different times or together in the same person. They occur in about 15 per cent of the population at some time or other in their lives, with women more commonly affected than men, according to Allergy UK.