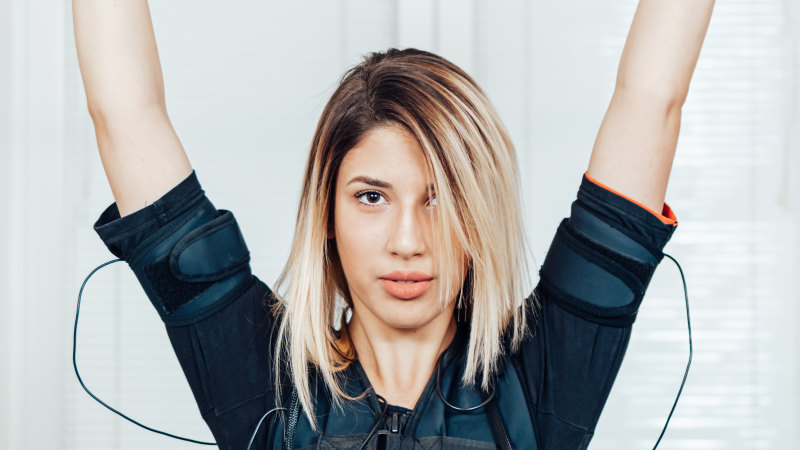 When I received an email about the “shocking Hollywood fitness trend sweeping Australia”, I was less interested in the so-called celebrities who have recently uploaded videos of themselves trying it out as I was in the suggestion that elite athletes like Usain Bolt and Rafael Nadal are fans.

So, what is this shocking fitness trend? 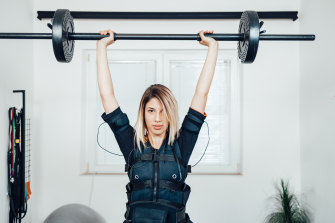 EMS training: a controversial method that may or may not be a shortcut to fitness.Credit:Getty

EMS training (electronic muscle stimulation) was “particularly sexy in the 1960s to 1990s”, says Tony Blazevich, a professor of biomechanics at Edith Cowan University, and the director of the Centre for Exercise and Sports Science Research.

“Former eastern-block countries had been using it, and we tended to copy a lot of their methods,” he said. That was, of course, before the world realised that many of the gains they were making in sport were more likely due to mass doping than mass muscle stimulation training.

But, Bruce Lee was a fan, Cristiano Ronaldo is the face of Japanese EMS home-gym brand Sixpad, other athletes including Usain Bolt have been pictured doing it and Rafael Nadal has reportedly tried it. Just because a celebrity or athlete has been pictured trying something, however, doesn’t mean it is part of their regular training regime, and that seems to be the case certainly as far as Nadal is concerned.

EMS – which is also referred to as NMES (neuromuscular stimulation) is similar to the TENS machines some women use during labour, though it uses a different intensity and frequency of currents – has a variety of uses.

Blazevich says that today, it is typically used to improve strength in hard-to target areas like the foot muscles, to train muscles during injury or in a pulsed, low-intensity mode to promote blood flow and tissue recovery.

Dr Che Fornusek has been using it for years to help people with spinal injuries and those with central nervous system conditions like multiple sclerosis.

The idea is that by stimulating atrophied muscles using electric currents, you can mimic what the nervous system does.

“We can get some benefits,” explains Fornusek, a lecturer in sport and exercise science at the University of Sydney. “For people with complete spinal injury, their muscles will grow to some extent, they will get blood flow, they will get things like reduced muscle spasm.”

In some instances, it may even help to retrain a muscle to fire again: “Sometimes it can feed back into the brain because it activates the sensory fibres too. It does have potential.” 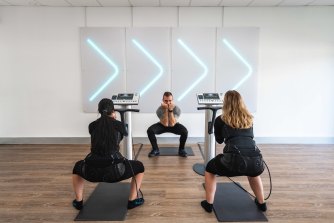 Its potential is often hyped up by the companies selling it to the public to get fit fast.

Sixpad has been accused of false marketing, while Danoz Direct’s Abtronic was removed from sale after the ACCC declared it to be deceptive with its claims it could blast fat and cellulite, flatten abdominals and that 10 minutes was the equivalent of 600 sit-ups.

When I have a phone induction ahead of a SpeedFit EMS training class – there are currently 29 SpeedFit studios in Australia – I’m told that during a normal workout, we only work one muscle group at a time. Via EMS however, we can activate up to eight muscle groups at a time. A 30-minute session, the woman over the phone tells me, is like 960 sit-ups and 960 reps of weight-lifting.

On the SpeedFit website, it explains that by sending electrical impulses that contract your muscles is,“incredibly time efficient: in just 20 minutes, an EMS machine will give you the same results as several hours spent sweating in the gym”.

I walk in to their sparse North Sydney gym where just two people can work out at a time. A wetsuit-like vest and straps that go around my biceps, thighs and glutes are sprayed with water, to make them conducive to the electricity, and plugged into the station.

Co-owner Roland Safar, a friendly Slovakian whose background is not in fitness or health, leads me through the 20-minute session. He invested in the business when his university friend Matej brought a machine back from Europe and asked Safar to trial it for three months. Safar did it once a week, he tells me, and was so impressed with the changes to his body, he agreed to invest. We do some basic squats, lunges and bicep curls as he manually increases or decreases the intensity of the electrical pulses that contract my muscles rhythmically. I wasn't puffed during the class but after a very basic 20-minute session, my muscles certainly ached and felt as though they’d been worked. “Can it cause cramps,” I ask as my bicep twitches. “No,” he assures me, insisting that instead it relieves them and sore muscles too.

The workout is perfect for people who are time-poor or who don’t really like fitness, he says, as you get more bang for buck.

This may or may not be true.

What is true is that EMS can cause much more muscle damage than normal exercise because it activates our muscles “in a weird way”, Fornusek says.

Too much intensity and activating many muscles simultaneously, can cause injury and even lead to the life-threatening Rhabdomyolysis, “which is extremely hard to evoke during normal exercise”, Balzevich adds. There have also been reports of shocks, burns, bruising, skin irritation, and pain associated with the use of some EMS devices.

For this reason, Blazevich cautions people who want to try it to do a detailed safety check, and ensure it is operated by a qualified professional (preferably someone with a PhD or an allied health professional with clinical experience).

And while some athletes do use EMS, it is uncommon.

“Certainly it’s not a recognised part of any training plan I’ve seen internationally,” Blazevich says, reminding that performance is about skills more than muscle size or even strength.

Indeed, the Australian Institute of Sport say its use is “is very limited and only in specific circumstances”.

Fornusek adds that “there’s not a lot of strong evidence” that it enhances post-exercise recovery or majorly benefits otherwise healthy people wanting to improve fitness or strength.

“My gut feeling is it’s better for people with an impairment of the central nervous system or an injury,” he says. “But if it works for you, and it makes you more active, then that’s a good thing. It definitely has a place.”

Its appeal, for many, is that you can get each session done quickly – it provides a short-cut if you don’t enjoy exercise.

Although everyone likes a short-cut, I wonder if we miss something along the way. Short-cuts are focused on the destination not on how to enjoy the process.

And given a high percentage of people don’t use their gym memberships and more than half of Australian adults don’t meet the physical activity guidelines, perhaps if we want to improve our fitness we’d all do better, and have more fun, if we forgot the destination and found a way to enjoy the ride. Blasting your muscles with electricity not necessary.