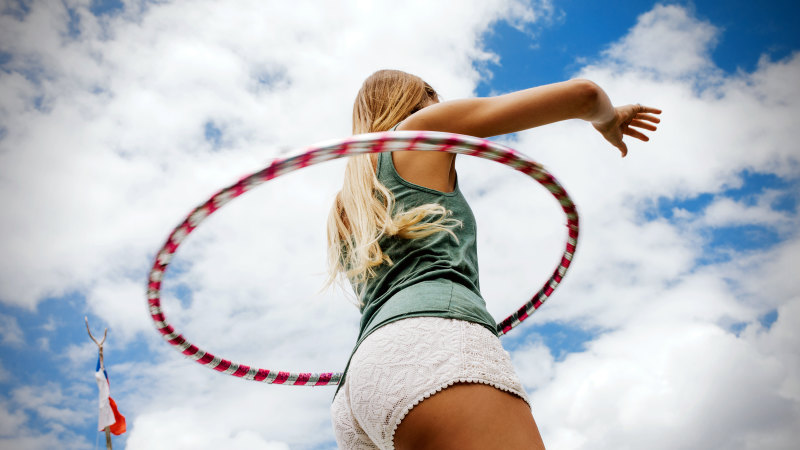 In a bid to get fit, it helps to think outside the box. So, instead of pounding the pavement or hitting the gym, hordes of people are picking up hoops and hula-ing their way to better health. I’ve decided to join them. Which is how I find myself in a community centre in Melbourne on a drizzly Thursday evening.

To be honest, I didn’t know what to expect from my first hula-hooping class. I pictured an hour of people serenely hooping while I flailed like a drowning rat. I was wrong (not about the flailing part, but the activity). 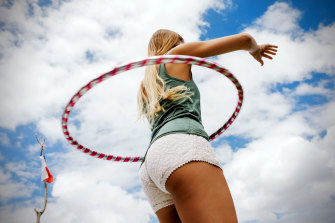 “A lot of people think it’s all about the abdominals, but it’s much more than that.”Credit:Getty Images

Instead, the class starts with basic stretches and movements, all incorporating a hoop. Thumping music and high-speed hooping follows for my four fellow participants. I, on the other hand, spend most of my time listening to my hoop clang to the floor before sheepishly picking it up, again and again.

The instructor, Donna Sparx, is ever so patient. “Move your hips less,” she tells me, as my hoop sashays to the floor. “Give the hoop a bigger swing to start with,” she says, as I bend down yet again. “Don’t over-think it.”

After a while, it’s time for choreography. Sparx is all fluidity and grace as she twirls the hoop above her head and performs a series of advanced manoeuvres before ending with some good ol’ hooping. I am so out of my depth.

But as Sparx teaches each step slowly, I start to get the hang of it. I’ve stopped over-thinking and there I am, hooping with the best of them. It sounds stupid, but I feel elated.

Sparx gets that. She began teaching this activity seven years ago, after she fell head over heels for hula-hoop dancing. That love saw Sparx walk away from her “big, grown-up job” as a business development manager, and its six-figure salary, to start her own business, Hoop Sparx. “It’s a bit mad,” she says with a laugh.

She still derives great pleasure from that crazy move. And her students clearly do, too, as more and more have been flocking to classes.

And if you think they’re all young festival-goers who wear unicorn leggings, you’re wrong. Sparx says she has many students in their 40s, 50s and 60s, including people with disabilities. “So it spans a broader range of the community than most people would assume,” she says.

The benefits gained from this activity are more varied than you might think, too. “A lot of people think it’s all about the abdominals, but it’s much more than that,” says Sparx. It’s also, she adds, a cardio workout that focuses on forearms, biceps, gluteals and legs, as well as detailed smaller muscles through refined movement.

That’s not all, folks. Sparx says hooping is also beneficial for mental health. “It’s definitely more than just a ‘body thing’,” she says. “It’s kind of a ‘mind, body, spirit’ thing because there’s something about not being able to think about anything else when you’re doing it that is a bit like movement meditation.”

You don’t have to leave your living room to get started. Sparx suggests buying a hoop that, when you stand, stretches from the tip of your toes to roughly your belly button. Then crank up the tunes and hop on YouTube for a free tutorial. “There’s no right or wrong way; it’s really about enjoying yourself.”

And it really is enjoyable. As the class ends, I realise that I’m sweaty, a bit puffed and still wildly grinning. I wake the next morning with aching abdominal muscles, tired arms and a sense of achievement. Turns out that hula-hooping is my kind of exercise: one that works your body, gives you a mental break from everyday life, yet feels like child’s play.

This article appears in Sunday Life magazine within the Sun-Herald and the Sunday Age on sale February 16.