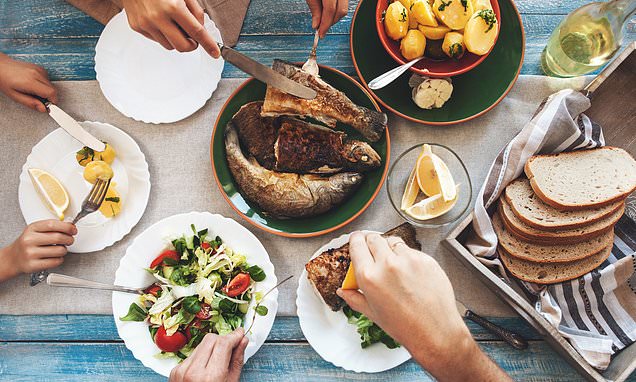 The benefits of a family dinner: Sitting down together forces teenagers into a healthier diet – whether there’s conversation or not

Family meals really do improve teenagers’ diets and put them on a path to healthy eating in later life – even if home life is dysfunctional, according to a new study.

Researchers surveyed more than 2,000 families in the US, and found unequivocally that kids who grow up with at least two family meals a week ate more fruit and vegetables, and fewer burgers and fries.

The impact was strongest on boys, they found, who were far more likely than girls to eat mainly junk food if they hadn’t grown up with family dinners.

It is hardly the first study to suggest the power of family meals but researchers say it’s more important than ever to investigate and share these findings as obesity rates soar, and teens become more reclusive. 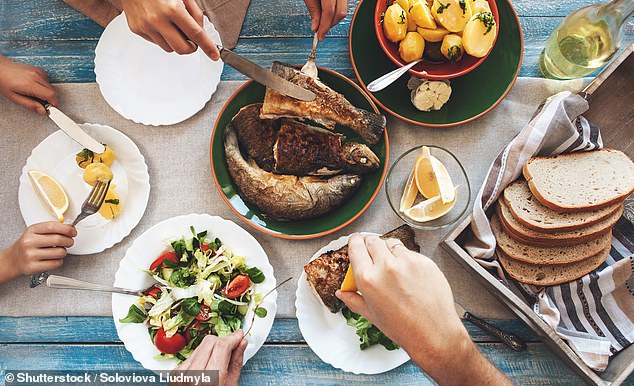 Youngsters growing up in households where parents and children eating together is routine consume more fruit and vegetables and less burgers and chips. It also cuts boys’ intake of soda

‘The findings suggest family dinners are a good way to encourage more healthful eating in adolescents and young adults.’

In the UK, only a third of Brits eat in the dining room – compared to just under half who use the lounge. The dinner table is now only used for special occasions – and a fifth of UK homes don’t even have one.

In the US, the family dinner is still a strong part of culture. Around 88 percent of Americans say they regularly eat with other members of their household.

A bigger issue in the states is that most Americans (around 90 percent) don’t like to cook, preferring take-out, which doesn’t pack a nutritional punch.

But for this study, Walton and colleagues found family meals did encourage adolescents and young adults to have healthier diets and eat less fast food.

This was regardless of other daily domestic routines, communications and emotional connections.

‘However, existing studies have not examined how family functioning may moderate or confound this association.’

These were based on factors such as educational attainment of mothers’ spouse or partner and household structure.

The links between the meals and healthier food consumption did not change when family functioning was taken into account.

Walton said: ‘When the goal is to improve dietary intake, family dinners are an appropriate intervention target for all adolescents and young adults regardless of level of family functioning.’

She added: ‘Family dinners may be an appropriate intervention target for improving dietary intake among youths.’

It is recommended children eat five portions of fruit and vegetables per day.

Those who always eat together are more likely to achieve this. Watching parents and siblings eat teaches good habits, experts say.

Walton said: ‘Adolescence and young adulthood are vulnerable life stages for the development of obesity.

‘Poor dietary intake has been identified as a key risk factor for excess weight gain among these populations, with diet quality often declining from childhood to adolescence and young adulthood.

‘Numerous studies have found that more frequent family meals are associated with improved dietary intake among adolescents and young adults.’

It’s been argued family dysfunction may interfere with organizing and preparing healthy meals.

But Walton said: ‘Our findings suggest not only do families with lower levels of functioning participate in frequent family meals but that family dinners are associated with improved dietary intake – regardless of level of family functioning.’

She added: ‘Our results suggest family dinners are an appropriate target for improving youths’ dietary intake.

‘Although for some families, family-based therapy to improve family functioning may be important for other aspects of adolescent health or to reduce engagement in risky behaviors, such as drug use, when the goal is to improve dietary intake, participation in frequent family meals is an appropriate intervention method, even for families with lower levels of functioning.’