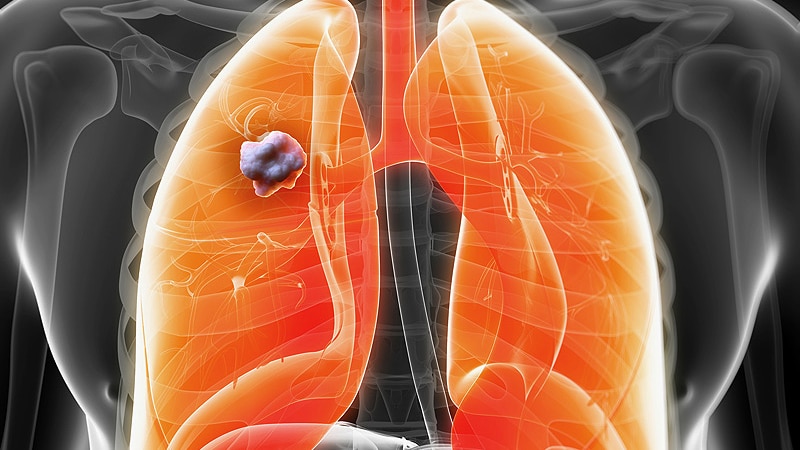 Among the 38 adults in their single-arm, open-label TEMLA trial, median progression-free survival (PFS) with the combination was 13 months, and overall survival at 12 months was 72%.

It “may become a standard treatment in this population,” they suggest.

The study was published online on December 15 in JAMA Oncology.

Antiangiogenic drugs such as bevacizumab and anti-programmed cell death 1 ligand 1 (PD-L1) inhibitors such as atezolizumab seem to have synergistic effects for patients with NSCLC, but even among patients with high PD-L1 expression, only a minority respond, note the authors of an accompanying editorial.

Echoing earlier investigations, the trial suggests that high tumor mutation burden (TMB) might be that biomarker. The editorialists agree that the results are “encouraging,” but they were doubtful of drawing conclusions from the trial.

Without head-to-head comparisons and with several first-line immunotherapies ― including atezolizumab ― already available for metastatic NSCLC with or without chemotherapy, “the TEMLA regimen should not yet be incorporated into clinical practice for the initial treatment of advanced NSCLC, particularly given the added toxic effects associated with bevacizumab,” they say.

The 38 patients in the trial had stage IIIB-IV nonsquamous NSCLC and were treatment naive. They had high TMBs, defined as 10 or more somatic coding mutations per megabase (mut/Mb) in tumor samples per the FoundationOne CDx assay.

Additional outcomes included a 12-month PFS of 51.3%; an objective response rate of 42.1%; and a median response duration of 11.7 months. Median overall survival was not reached over a median follow-up of 22.1 months.

Outcomes tended to be better among patients with higher TMBs, which led the editorialists to suggest that the cutpoint of 10 mut/Mb in TEMLA “may not be high enough” to identify patients most likely to respond to treatment.

PD-L1 levels were not associated with outcomes in the trial, indicating “that PD-L1 levels have no added value in estimating response or survival in the population with high TMB,” the investigators say. However, given the small samples size in the different PD-L1 expression groups, the editorialists suggest that this “finding should be regarded with caution.”

The median PFS of 13 months in TEMLA compares favorably to the PFS of 12.6 months among patients with high PD-L1 expression in a previous trial of atezolizumab plus bevacizumab on a background of carboplatin and paclitaxel, but without the toxicity of chemotherapy, the researchers note.

The findings also compare favorably to those from an atezolizumab monotherapy trial; for patients with high PD-L1 expression, 12-month PFS was 36.9%, and 12-month OS was 64.9%, they say.

There were several funders of the study, including the Spanish Lung Cancer Group and Roche, maker of the FoundationOne assays and, through its Genentech subsidiary, atezolizumab. The investigators reported numerous ties to both companies and many others, including Pfizer, maker of bevacizumab. Among numerous industry ties, Provencio reported grants from Roche and Pfizer, as well as being a consultant, speaker, and researcher for Roche and having his travel costs covered by the company. Ricciuti reported consulting fees from Regeneron. Awad reported grants and/or personal fees from Genentech, AstraZeneca, and others.

M. Alexander Otto is a physician assistant with a master’s degree in medical science. He is an award-winning medical journalist who worked for several major news outlets before joining Medscape and is an MIT Knight Science Journalism fellow. Email: [email protected]