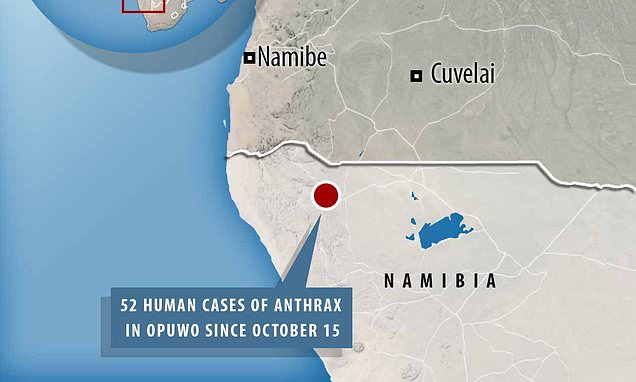 An anthrax outbreak in the African country of Namibia has struck at least 52 people who have handled or eaten dead goats.

The disease, which is rare in people, can make people vomit blood and is often fatal if not treated quickly.

It is usually caught from animals which have died of the bacterial infection, either by handling their carcasses or eating their meat.

The World Health Organization warned ‘the likelihood of more human cases is high’ because people in the region have so much contact with potentially sick animals. 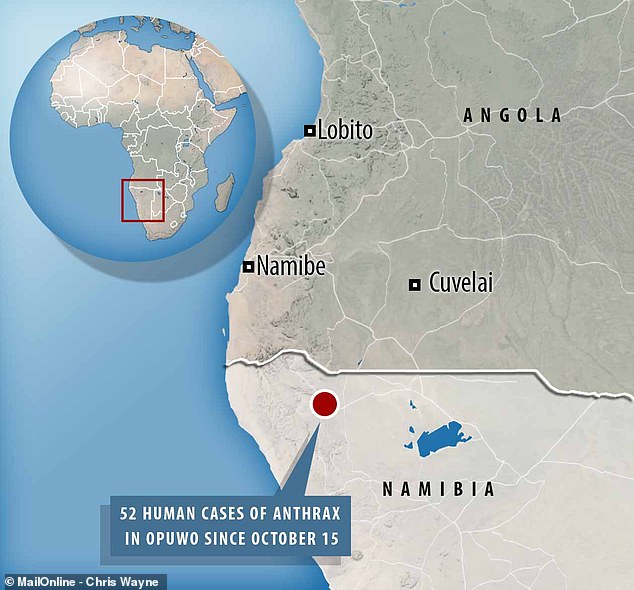 At least 52 people are reported to have been infected with anthrax in the Opuwo region in the north-west of Namibia. People are thought to have caught the infection from goats, cattle and donkeys which picked up it up while grazing – anthrax spores can remain in soil for years

In the Opuwo District of Namibia, where the current outbreak is taking place, most people work as goat farmers and 98 animals have died of unknown causes.

The goats, donkeys and cows which have died mysteriously since August are believed to be responsible for transmitting the infection to people.

No people are known to have died in the current outbreak, but 138 people have been given antibiotics after coming into contact with dead goats.

The disease can kill within a couple of days if caught by eating meat, but around 75 per cent of people survive cases transmitted to the skin, which respond well to antibiotics.

Officials say the current outbreak, taking place in the far north-west of the country, began in an 11-year-old boy in October, and early cases have affected people’s skin.

In general, anthrax spores are found in the ground and infect grazing animals, so do not spread on their own, but could be transported in meat or animal products.

The WHO report said: ‘The likelihood of more human cases is high, given the outbreak in goats and the common risk practices such as slaughtering sick animals and/or skinning and consuming meat from animals that have died of unknown causes.’

It added: ‘Collective cross-border approach with Angola is needed to control the event and prevent further infections.’

Anthrax is rare in developed countries and even rarer in humans – there are about 2,000 cases a year worldwide, mostly in Africa – but it can be extremely deadly.

‘If people eat meat from infected animals they can die within a couple of days,’ said Professor David Mabey from the London School of Hygiene & Tropical Medicine.

But, he told MailOnline, because the earliest cases of the outbreak showed skin infections, people are less likely to die.

‘If animals get infected they can die pretty quickly,’ he added. ‘So the idea of there being an epidemic among goats isn’t really a concern here.

‘Anthrax spores can survive in soil for decades. Animals get infected when they swallow spores, usually at the end of the dry season when they are down to the grass roots.’

Professor Mabey said the key to controlling this outbreak would be to urge people not to eat the goat meat.

According to the US Centers for Disease Control and Prevention, anthrax is one of the most likely chemicals to be used in a bioterrorism attack.

In 2001, just a week after 9/11, letters containing anthrax spores killed five people and infected 17 others when they were sent to Democratic senators in the US in an act of slaughter which was never fully solved.

But most of the few people who develop the illness will get it from contaminated farm animals.

In 2016 there were 16 reported animal anthrax cases in the European Union, with nine in Hungary, four in Spain, two in Romania and one in Greece.

Two cows on a farm in Westbury, Wiltshire, were infected with the bacteria in 2015, which was believed to be the first UK outbreak since 2006.

And there was an outbreak of the disease in Namibia last year which resulted in the death of more than 109 hippos.

Anthrax is the name of the disease caused by the spores of bacteria Bacillus anthracis and affects around 2,000 people per year, mostly in Africa.

The disease is more common in animals.

Anthrax can be contracted by touching, inhaling or swallowing the spores, which can lie dormant in water and soil for years.

Once inside the body they become active and start producing toxins, which cause the disease.

Symptoms range from blisters to shortness of breath or diarrhea depending on how it enters the body.

The vast majority of cases are caused by skin contact. This is the least deadly form of the disease, with around 75 per cent of patients surviving even without treatment.

If inhaled the spores are far deadlier, with only 20 per cent of people surviving, even if they get medical help.

Source: US Centers for Disease Control