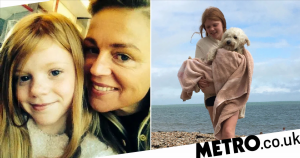 Orla Astles-Jones, 12, has always loved guinea pigs, gymnastics and dancing. She dreams of being a dancer and vet.

But when she was diagnosed with scoliosis and kyphosis, her dreams came to a sudden halt.

Orla, from Reading, was diagnosed with scoliosis – which causes the spine to twist and curve to the side – and kyphosis after complaining of pain in her lower back.

She had always been active, so her mum, Nicola, assumed her daughter was just feeling a bit sore from her sports.

Nicola, an HR manager, tells Metro.co.uk: ‘She was the kid that would always clear up at sports day. That was always a very happy day for us at primary school.’

During Orla’s first term at secondary school she went to her GP about the pain, and was then referred to the Royal Berkshire Hospital and then Nuffield Orthopaedic hospital in Oxford. There, she was told that she had idiopathic thoracic scoliosis and kyphosis – in simple terms, a hunch back and progressive curvature of the spine.

Orla is still growing, and so her spine is getting worse rapidly. Initially her spinal curve measured 57 degrees. Now it’s over 70 degrees.

The curve of Orla’s spine and the pain it causes means she’s had to quit both dance and gymnastics.

On the NHS, the 12-year-old’s only option is fusion, which involves making separate vertebrae into one block. For Orla, this would mean making 13 of her vertebrae into one section of bone – more than half of her movable joints. With this treatment her spine would be straight, but she would never be able to return to gymnastics.

Fusion would also result in restricted growth of Orla’s spine while the rest of her body grows normally. Measuring just 139cm and 29 kilos, this is, as her mum puts it, a ‘huge problem’.

Doctors typically wait for a patient to finish growing before performing fusion, but as Orla’s scoliosis is so aggressive, they can’t afford to put off treatment.

Presented with fusion as the only option, Nicola did some research to work out if there was any other way to rectify Orla’s spine without killing her dreams.

Nicola found out about VBT, a surgery that essentially provides an internal back brace, supporting spinal growth and correcting the spine’s position.

VBT is a major surgery, involving the deflation of a lung and potential removal of ribs – but it would allow Orla to grow normally and continue with her love for dance and gymnastics.

Unfortunately, VBT is expensive and not currently available on the NHS.

Orla was accepted to an international children’s hospital in Philadelphia for a VBT trial, but was eventually considered too severe for the treatment. VBT was also offered as part of an NHS trial at St George’s Hospital for less than two years, but sadly the funding was pulled.

The doctor behind this trial has been able to give Nicola a quote for performing surgery privately: £43,212.

That isn’t possible for the family to afford, so Nicola has started a GoFundMe to raise the money needed to fix Orla’s fine and give her a chance at a happy, healthy life.

‘Orla has an energy that is hard to match,’ says Nicola. ‘But it’s been tested over the last 12 months.

‘She was diagnosed by the GP just five days after we switched off the life support machine to my brother, who took his own life. He lived for a week in intensive care; life doesn’t get much harder than that, I hope.

‘She was incredibly close to him and was brave enough to go to the hospital in Tunbridge wells to say goodbye to her uncle in ICU. At first, she didn’t want to talk about it and I wasn’t really in a place to deal with it.’

Orla’s scoliosis means she’s often in pain and can’t do all the activities she loves. Even sitting at a desk at school is hard, and Orla has had to miss days due to pain.

Nicola tells us: ‘She wants to be active but pays the price afterward. She doesn’t want to be left out.

‘Fusion would stop the curve and straighten her hunchback but it would also mean she would be lucky to get to 5ft tall and would certainly never go back to gymnastics.’

For now Orla has regular physiotherapy and has had to stop dancing, but urgently needs to fund her surgery before her condition gets worse.

So far a friend has run an ultra-marathon to raise money, while others have helped out with cake sales, school fundraisers, and a three-day cycle across the French alps – but the family still has a long way to go.

‘It’s hard to say you need help and I was reluctant,’ says Nicola, ‘but it seems crowdfunding is the future.

‘Orla desperately wants to get back to dancing, and she dreams of being a vet.’

To help Orla get the surgery she needs, you can donate through GoFundMe or sign up to Orla’s silent auction.

Do you have a story to share? Get in touch with us at [email protected]