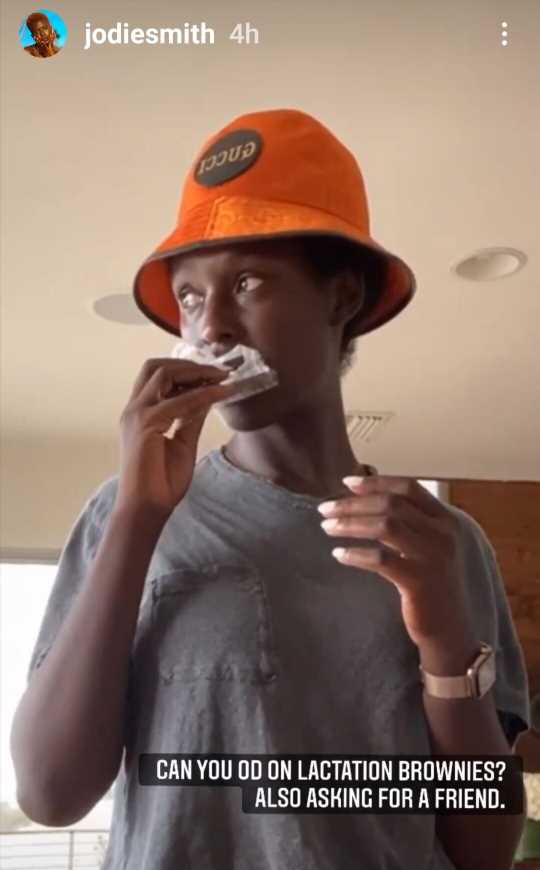 Jodie Turner-Smith has a serious question regarding her new eating habits.

Over the weekend, the 34-year-old actress and new mom shared a photo of herself biting into a lactation brownie on her Instagram Story.

In the snap, Turner-Smith, dressed in a gray t-shirt and orange hat, turned her head sideways while nibbling on the snack.

"Can you OD on lactation brownies? Also asking for a friend," she wrote on the photo.

Turner-Smith and her husband Joshua Jackson welcomed their first child together in April, reps for both stars confirmed to PEOPLE at the time. Two days later, Turner-Smith celebrated the news on Twitter, writing, "I'm a mother!" She also thanked her fans for the outpouring of well wishes and congratulations.

PEOPLE confirmed last December that Turner-Smith and Jackson, 42, had tied the knot.

A month later, the couple revealed that they were expecting their first child when they stepped out together in Los Angeles in January, with the British actress showing off a visible bump. Two months later, on International Women's Day, Turner-Smith announced they would be having a daughter. RELATED: Why Jodie Turner-Smith and Joshua Jackson Won't Raise Kids in the U.S.: 'White Supremacy Is Overt'

Last week, Jackson posted a sweet tribute on Instagram in honor of his wife's 34th birthday, thanking the actress for all of the positive ways she's impacted his life.

"Happy Birthday my beautiful wife," he wrote. "Thank you for choosing to share your light with me. Thank you for walking this path of life as my wife. Thank you for bringing our daughter into the world. This last year has been the happiest whirlwind of my life. I can't wait to see what all the years to come bring our way."

Along with the heartfelt message, the actor shared a smiling photo of Turner-Smith.