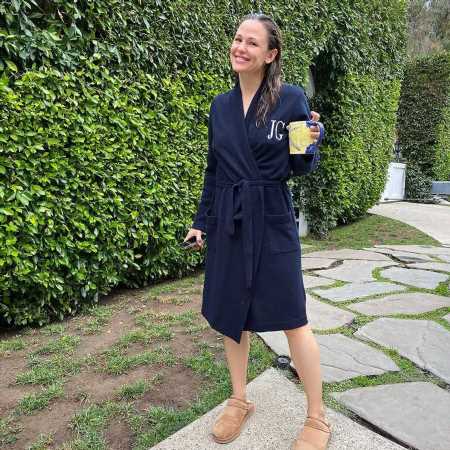 Jennifer Garner is proving that no one can escape hectic school day mornings.

The actress and entrepreneur shared an Instagram post on Wednesday that any parent who has rushed to get their child to school on time can surely relate to.

“She barely made the bus on time, but at least her mother kept it classy. 🙌🏻🌟👵🏻” Garner, 47, wrote on Instagram to accompany a photo of herself with wet hair, wearing a monogrammed robe and house slippers with a giant mug in hand.

Garner is mom to two daughters, Seraphina, 10, and Violet, 13, and one son, Samuel, 7½, all of whom she shares with ex Ben Affleck.

Despite a few hectic mornings, Garner can’t help but gush about her children when she gets the chance.

“I can’t really complain about my kids,” she said in September, speaking at an INBOUND panel in Boston, Massachusetts. “They’re pretty awesome. They humor me.”

The 13 Going on 30 star added that throughout her years of parenting, she has “chilled out.”

“But I have chilled out and stopped trying to be my mom,” she added at the panel, explaining that growing up, her mom cooked everything from scratch and she used to try to do the same.

“Here I am making homemade wheat thins like a nerd and my kids don’t want them,” she said. “The harder you work on whatever you’re making for your kids, the less apt they are to eat it.”

But Garner’s new laid back approach to parenting hasn’t affected her need to protect her kids’ privacy.

“It’s so gnarly to be a kid now,” Garner told InStyle in August. “I guard my kids’ privacy as much as I possibly can, and I’ve never posted pictures of them on Instagram. I used to refuse to say their names during interviews — but everyone knows their names! I would just say ‘my eldest,’ which I still do out of habit a lot.”

“I’m sure there are times my kids would really love to see themselves reflected on my social media in a fun way and to have the attention they would get from that. But I’ve fought too hard against it. It would feel hypocritical,” she continued. “There’s no implied judgment of people who do put their kids up there; I just don’t think most kids have been hounded in the way that mine were when they were little.”

Recently, Garner revealed to Katie Couric that she has forbidden her oldest daughter, Violet, to join Instagram.

“Without even having parents who are well-known, I worry about all kids having to deal with this new pressure,” the actress said on the Next Question with Katie Couric podcast. “My daughter’s at an all-girl school, and it’s such a huge problem.”

“She’ll occasionally talk to me about getting Instagram, and I can see why because I’m on there and it’s something kind of fun that I do, and I am modeling the opposite of what I want for her to do,” she said. “How often is that in parenting?”

Garner said while she’ll let the 13-year-old look at the social media platform on her account, she tells Violet, “When you can show me studies that say that teenage girls are happier using Instagram than not, then we can have the conversation.”