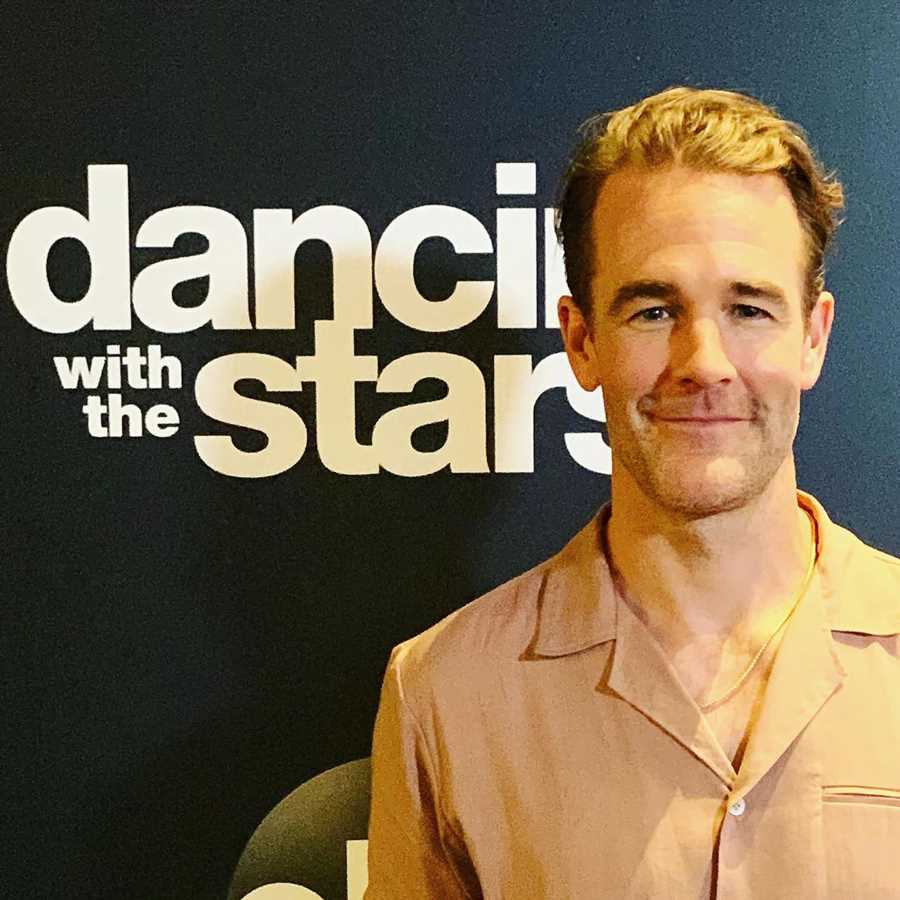 Forget the fan votes — James Van Der Beek has all the support he needs at home!

On Wednesday, shortly after it was announced that the actor, 42, would be joining the season 28 cast of Dancing with the Stars, James shared a sweet video of his family rooting him on from home while he appeared on Good Morning America.

In the adorable clip, which was filmed by Kimberly, the kids can be heard chanting “Daddy! Daddy! Daddy!” as they watch their father on the morning show. Off to the side, little Gwendolyn is featured bouncing up and down to the rhythm of their chant.

When it comes time for James to be interviewed on GMA, the cohosts ask him about his kids and the Dawson’s Creek alum proudly responds that he has five children.

The screen then flashes to footage of his children, which prompts the youngsters to erupt into laughter and joyful yells. Kimberly is also heard squealing and telling her smiling children, “Ah! That’s you guys!”

After seeing themselves on the television screen, one of James’ daughters can be heard excitedly yelling, “That’s me! That’s me!”

Along with the adorable Instagram video, the father of five sweetly wrote in the caption, “Squad for life ❤️❤️❤️❤️❤️.”

The actor’s kids were also on his mind earlier that morning and he opened up about it on a video posted to his Instagram Stories. Speaking to the camera as he stood beside a window overlooking Times Square, James admitted that he missed his little ones.

“All I can think about is I miss my kids, which is a good thing!” he shared, while also captioning the shot, “Been away from my kids for literally 11.5 hours.”

Though James may be one of the newest cast members to join DWTS, he’s no stranger to the show.

Before signing on for season 28 of the hit dancing competition, the actor competed on the show as part of a storyline on the sitcom Don’t Trust the B in Apartment 23.

In season 2 of the since-canceled show, James, who played a fictionalized version of himself, stressed over who would be his pro dancing partner and how to beat his biggest competition, Dean Cain.

But while he said he had a “blast” filming the scene, he didn’t have any plans to appear on the show in real life  — that is, until now. “I think it’s more fun to do it this way. You can play it for laughs and not have to do all that work!” he told Parade in 2012.

RELATED: James Van Der Beek Already Competed on DWTS — in Don’t Trust the B in Apartment 23

Speaking to PEOPLE Now on Wednesday, James said he “always secretly wanted to do it,” saying that’s why he pitched the DWTS storyline on Don’t Trust the B.

“And then we did it, and I thought, ‘Well, okay, I’ve done it,'” he added. “I’ve been writing and creating, and I just sold a show. We’re going to start production probably in about four months. And this came up, and I thought, ‘That’s crazy … I love crazy. Do I want to do this? Yes!’ And so I’m here.”

The star also shared his excitement to join the show for real in an Instagram post where he posed beside DWTS‘ logo.

“The craziest choices are always my favorite ones… #YesItsHappening @dancingabc,” he captioned the shot.

This season, the pro dance partner pairings won’t be unveiled until the premiere.

Season 28 of Dancing with the Stars premieres on Sept. 16 on ABC.