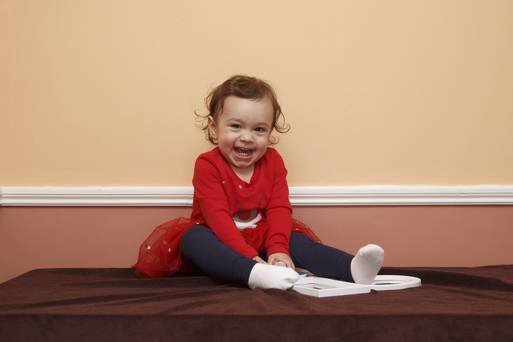 Throughout the year, Mothers & Babies has hundreds of delightful photos sent in for our ‘Picture Your Baby’ pages. Every baby who appears on the pages is a winner – but this year Sarah Paiva has been selected as our cover star for December 2018. The 17-month-old from Dublin is an only child and her mother Jasnica says her little girl has a great adventurous spirit. “She’s really curious and she likes exploring things, trying everything and she isn’t afraid of absolutely anything,” her proud mum tells us.

Jasnica, who works as an accountant in the fitness industry, is originally from the capital of Croatia, Zagreb, and her husband Ary is from Brazil. “I just wanted to make a change and decided that Ireland was the change I wanted,” says Jasnica, who moved to Dublin four years ago. Becoming a mother became increasingly important to her once she met Ary. “I wasn’t sure until I met my husband and I suppose that it comes naturally after that, when you meet a nice person and you’re at a certain age, you obviously want to have a family and move on with more serious stuff,” she says.

Sarah’s parents are hoping that she will eventually be trilingual. “We mostly use English, 80pc of the time and sometimes when I’m putting her to sleep, I speak Croatian and my husband uses Portuguese. But we are aiming for her to learn all three languages,” Jasnica explains. Both parents work full-time and have an au pair to look after Sarah while they’re at work.

Her daughter, Jasnica says, is very independent and likes to do everything herself. “I try to explain to her that she can’t do something but she’s stubborn.” And Sarah is enthralled by phones and technology – whenever her father is playing PlayStation games, she’ll try and grab the controllers and at the weekends she’s constantly taking Jasnica’s phone.

The family like spending time outdoors and whenever the weather is good, they’ll go to the park, where Sarah likes the swings and running around. When the weather is less favourable and they have to spend time indoors, they like to read books together. Sarah loves when Jasnica sings the alphabet to her and although she’s not speaking yet, she’s trying to say things like ‘a for apple’. While she’s not interested in teddy bears, she adores her interactive wooden toys which help her learn how to count numbers. “But her favourite toy is the phone I’m afraid, I won’t lie,” says her mother. Like many other 17-month-olds, Sarah has become somewhat picky when it comes to food. “She used to be a really good eater and she ate everything, even broccoli and cauliflower, without any problems. But recently, in the last three weeks, she started being really fussy about everything,” Jasnica says. “I have to combine new things all the time. Sometimes I would make three different lunches for her and she wouldn’t eat any of them – I keep trying and keep offering. If she doesn’t like something, she takes it and she starts feeding me just to get rid of the food that she doesn’t want.”

Her mother thinks she’s probably a little too young to understand about Christmas and Santa. “I took her out to Blanchardstown shopping centre and she saw a lot of Christmas decorations and she was interested but she’s interested in lights in general, I’m not sure if she actually understands that it’s something special,” says Jasnica.

“I was showing her and telling her but it’s more about lights – when she sees lights in a lift she’s amazed by them.”

Since she was born, Sarah has been a mama’s girl. She’s also not happy unless she’s in her parents’ bed.

“We just couldn’t get her out of the bed because she’d start screaming for two or three hours. Now she’s a cosy co-sleeper and we’re hoping to kick her out but she’s not being cooperative about this,” Jasnica laughs.