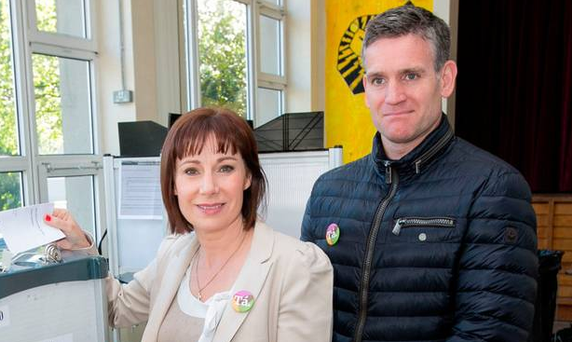 For all its power, dynamism and (supposed) cut and thrust, politics can be a lonely outpost, whether you’re male or female. The hours are erratic. The ‘robust’ online debating (read: trolling) can be truly scathing. The running of a constituency office is a wild, unpredictable beast. Often, keeping a head above water takes a strong constitution and a stronger personality, and this can go double for women. It goes without saying that in any sector, powerful women can do with all the help, childcare support and emotional bolstering that they can avail of. Still, it’s been interesting to note Josepha Madigan’s comments about a husband being a great political asset. Acknowledging the relentless pace of political life, Madigan has praised the support offered by her own husband, Finbarr Hayes, during her career and spoken about how the breakneck schedule of a politician can impinge on family life. Offering advice to younger female politicians, Madigan is quoted as saying: “Get good childcare, get a good husband, have the confidence and don’t over-think it.”

Madigan isn’t the first female politician to voice this sentiment: who can forget the several effusive tributes that former Fianna Fail minister Mary O’Rourke heaped on her late husband Enda down the years? Of course, it isn’t just female politicians who have spoken out about the importance of a supportive partner. Enda Kenny has openly admitted that he would be floundering without his wife Fionnuala; Maureen Haughey was long credited as the indefatigable wind beneath Champagne Charlie’s wings. Yet there’s something about this dynamic in reverse – she, the powerhouse; he, the strong but silent scaffolding – that seems to capture attention. Is it that we have a problem acknowledging that some men have been key in facilitating a woman’s dogged climb to the top? Or is it that men have already been benefactors for so much of the credit for too long?

Yet Rabbitte, who was widowed in 2011 when her husband Paddy died, has noted that when it comes to balancing the very real demands of political and family life, it very much takes a village.

Though constituents understand that she is ‘mummy first and politician second’, Rabbitte previously noted that when it came to her three children, a number of staff, family and friends were a huge help in the smooth running of her household.

The question looms large: is it the case that behind every successful woman, there lies a strong and supportive partner? Certainly, one look at the corridors of power across the world might lead one to reckon so. From Theresa May to Angela Merkel; Christine Lagarde and Ivanka Trump, there are several high-profile female leaders in government and big business around the world. Their partners are often cast in the role of ‘backbone’. Certainly, as Theresa May lurches from one dark hour to the next, Philip May has famously been a constant presence in the wings, ready to offer no end of crisis support.

In her book Lean In: Women, Work & The Will To Lead, Facebook COO Sheryl Sandberg extolled the virtues of marrying well as a nifty career strategy: “When looking for a life partner, my advice to women is date all of them: the bad boys, the cool boys, the commitment-phobic boys, the crazy boys. But do not marry them,” she wrote. “The things that make the bad boys sexy do not make them good husbands. When it comes time to settle down, find someone who wants an equal partner. Someone who thinks women should be smart, opinionated and ambitious. Someone who values fairness and expects or, even better, wants to do his share in the home. These men exist and, trust me, over time, nothing is sexier.”

Senator and mum of two Ivana Bacik observes that it’s important for anyone in politics, irrespective of gender or marital status, to have an extended support network.

“You do need some sort of support outside of the political life, as it can be very lonely otherwise,” she affirms. “In Martina Fitzgerald’s book Madam Politician, a lot of female ministers do discuss being lonely. But for any of us in politics that have children, things would be much less difficult without a partner, male or female. I certainly couldn’t do it without a supportive partner (Alan Saul), and particularly my mother, who is really good in terms of offering childcare. To have a partner is a huge advantage: being a single parent is very difficult, in politics and elsewhere.”

The logistics of childcare aside, support in the face of the emotional vagaries of political lie is also paramount: “It’s great to have someone to sound off to,” Bacik notes. “There’s a lot of abuse in politics, especially on social media, and people manage this in their own ways, but it’s important to have the support of someone you can talk to outside of politics.”

Similarly, Minister of State for European Affairs Helen McEntee acknowledges the support of her husband Paul Hickey, who she married in 2017, but notes that it takes more than just a supportive plus one to make strides in the political arena.

“I have a fantastic husband and couldn’t do a lot without him, but if he wasn’t there, I would definitely have other support,” she reasons. “Having a husband or not doesn’t mean you can’t achieve (success). You’ll meet challenges whether you’re in a relationship or not, and you have to have that drive and ambition. Perhaps because there has been a lot of focus recently on the #MeToo movement, I suppose there’s the idea you shouldn’t say anything that there should be a man in the background. I don’t think it was what Josepha was saying at all. But to me, I don’t think there’s any difference in a woman or a man saying it.”