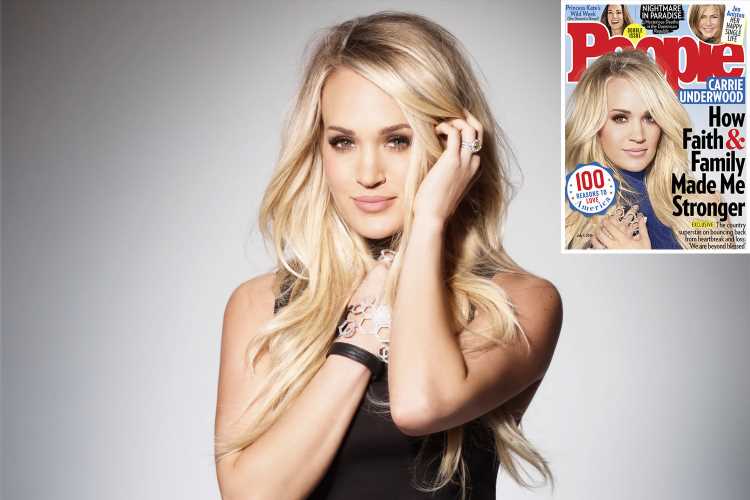 When Carrie Underwood belts out her moving hit song “Cry Pretty,” the emotion is all too real.

The resilient country superstar, 36, sits atop PEOPLE’s list of 100 Reasons to Love America in this week’s issue, and is the first to admit she’s been on a personal rollercoaster over the past two years — one that’s only made her stronger.

“I put a lot of stress on myself — I feel like a lot of moms do, a lot of women do,” she says. But like the message in her go-to hit “Jesus, Take the Wheel,” she insists, “the best moments in my life are when I say, ‘Hey, I can’t control everything, and that’s okay. God is in control.’”

For years the star’s life story has read like a fairytale. At 22 her childhood dream of becoming a country singer came true when she wowed the country and won big on season four of American Idol. She went on to huge success — just as judge Simon Cowell had predicted — and a few years later met the man of her dreams in hockey star Mike Fisher, whom she married in 2010.

The pair welcomed son Isaiah Michael in 2015, the same year she launched her successful CALIA by Carrie Underwood athleisure line. But fairytales have plot twists, and Underwood’s is no exception.

While out walking her dogs in late 2017, Underwood took a nasty fall outside her family’s Nashville home. The incident left her with a broken wrist and a facial laceration requiring 40 to 50 stitches.

While she bounced back following extensive reconstructive surgery, she was also experiencing another form of pain. Last September, she revealed that she’d suffered through three miscarriages in less than two years. Despite knowing better, she says, “Of course you wonder if it’s you, what am I doing wrong, or what have I done wrong. I remember having conversations with Mike trying to make sense of it all.”

A devout Christian, Underwood says it was a heart-to-heart talk with God that came next. “I’ve always wanted to be a good daughter to my parents but also to God and not complain, because we are beyond blessed,” she says. “I get to do what I love, I have an incredible family. I have Mike, I have Isaiah, I have great parents. I have all of these amazing people around me, and I don’t want to complain, ever.”

She continues, “But the miscarriages made me get real with God and say, ‘Okay, I’m kind of giving up a little bit. If this isn’t meant to happen, then I need to accept that and know that someday I’ll understand why.’”

It wasn’t long after that the star says they received good news. “We heard that everything was okay and I was pregnant with Jacob,” she says. “He’s just this perfect little bundle of a smiley guy.”

Now 4 months old, that little bundle is out seeing the nation with big brother Isaiah, 4, and dad Fisher, 39, who have all joined Underwood on the road for her acclaimed Cry Pretty 360 arena tour. “It’s a big awesome mess,” says Underwood, who jokes with audiences that Mike “is on baby duty … and I do mean doody!”

Balancing a booming career and a growing family is a lot to handle, but Underwood says she’s up for the challenge now more than ever.

“There is a thing about motherhood that makes you feel like, ‘Okay, if I can do that, I can do anything,’” she says. “And I feel like I’m a little older, a little wiser. This isn’t my first rodeo.”

For more on Carrie Underwood’s emotional journey and 99 other great reasons to love America — which span everything from the Grand Canyon to Shark Week to Michelle Obama‘s bestselling memoir — pick up this week’s issue of PEOPLE, on newsstands Friday.