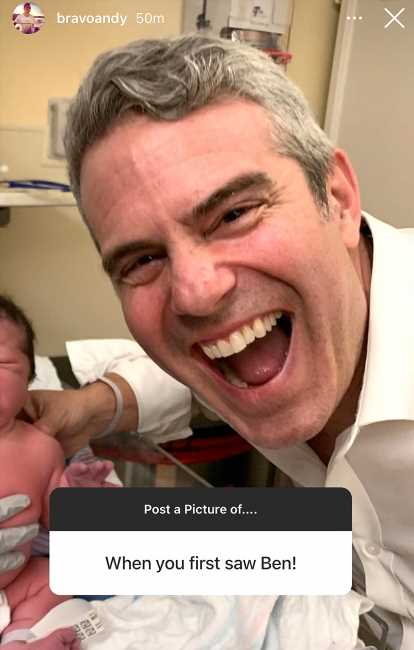 On Sunday, Andy Cohen shared an image from when he "first saw" his son, Benjamin Allen, after the Bravo star, 52, took part in a viral Instagram trend where followers use the app's question feature to ask users to share specific photos.

In the snapshot, the television personality poses beside his son — who was born via surrogate in February 2019 — as he grins from ear to ear.

Elsewhere, while taking part in the social media challenge, Cohen also shared photos of Ben when he was asked to share a shot with his "favorite person," as well as the last picture he had in his camera roll. Additionally, Cohen also shared a pic of his young son when one user asked him to share a pic from May 3 of this year. Last year, Cohen welcomed Ben on Feb. 4, sharing a black-and-white photo of himself holding his son on Instagram to celebrate his arrival at the time. "I'm in love," Cohen wrote. "And speechless. And eternally grateful to an incredible surrogate. And I'm a dad. Wow."

"Tonight, I want you to be the first to know that after many years of careful deliberation, a fair amount of prayers and the benefit of science — if all goes according to plan, in about six weeks time I'm going to become a father," he shared at the time.

Cohen also opened up to PEOPLE at the time about becoming a dad and the powerful moment when he first met his son. "I was in the delivery room. I had been hoping that he would have a full head of hair, and he really overdelivered," he joked. "That was the first thing you see, the head of hair coming out. And I was amazed."

After Cohen "cut the umbilical cord" himself, doctors cleaned Benjamin off and brought him over to the new dad, who then went skin-to-skin with his newborn for the first time.

"He was so alert for the first two hours. His eyes were wide open. He didn't cry; he was just calm," Cohen recalled. "I kind of have no words for it."