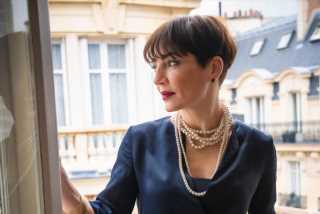 Melissa Obeid and her husband Jamie Arnold packed up their children and belongings in Australia in 2016 and moved to France for a new cultural experience that was to include diving deeper into the skin care space.

“When I had the idea for La Fervance, we were in Melbourne and I was inspired by a Napoleon exhibition,” said Obeid. “Then I went on to create [100 percent] natural baby products, which were sold to the major supermarket chains.

“It was at that time, around 2015, I identified that there was a void in the skin care space for a luxury product,” continued Obeid, who was interested in the naturals category.

So she started looking into that. The trip to France became a reality, then their home base from which Obeid would create La Fervance. (Arnold serves as its chief executive officer.)

Development took two to three years longer than expected (“there were a lot of parameters that I was not willing to compromise on,” explained Obeid), and then La Fervance launched just a few months before the pandemic hit.

Éclat Extraordinaire’s formula, with a “fusionistique” texture, is of wholly natural origin “using the best of French-Australian ingredients” that are highly active and with Ecocert certification. The product is made in France, including bespoke fragrances from Grasse and hand-crafted packaging.

In January 2020, La Fervance’s focus was online, selling via its own e-commerce platform and on Benaturallyyou.com.au. But discussions had begun with some brick-and-mortar retailers, too, such as Skins Cosmetics in the Netherlands, Belgium and South Africa.

Lockdowns struck yet still talks were ongoing, and then immediately post-confinement in June, La Fervance launched at Skins. Now, Éclat Extraordinaire is a bestseller there.

Obeid said she’s selective about which distributors her brand works with, that they must respect La Fervance’s identity and training is key.

“It was a rigorous selection of distributors, partners and staying on course,” she explained of the brand’s strategy during the pandemic. “And never — though the temptation would be to review pricing, the way we do things in this crisis — we didn’t. We just remained true to the values of the brand.

“We saw more potential and traction through retail, being a high-end luxury brand,” continued Obeid, who acknowledged that ran counter to other indie labels’ view. “It is a product that needs to be experienced. We find that the physical retail has been the key to our success over the past 12 months.”

Cut to today, and the brand is sold in doors such as Skinlife in Portugal, Beautysaur Organics in Hong Kong, Nose in Paris and Junora Beauty Lab in Lithuania. In the U.S., La Fervance just was introduced at the Rescue Spa in New York and Philadelphia, and it’s carried by Lemon Laine in Nashville, Tenn.

Sampling remains important for the multifunctional Éclat Extraordinaire product, which can be used in the morning, at night or as a treatment mask.

“More and more, the conscious consumer is questioning the need for too many products within their skin care ritual,” said Obeid.

La Fervance is set to debut a second product, Gommage Extraordinaire, next month.

“A positive mind-set and having perseverance, persistence and an unwavering belief in the vision and mission of what I have created has been the key to the success,” she said. “I credit the people around me that have been positive, and my faith. I’m really grateful to those retailers who took a chance on us at such an uncertain time.”

One Year In: The Pandemic’s Labor Impact By the Numbers