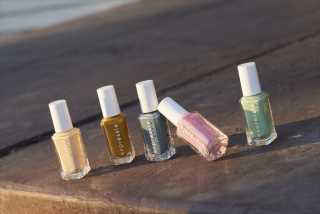 Essie is taking a new approach to gifting.
The nail company is tapping into RedditGifts, a year-round, online gift exchange program created by Reddit in 2009. Through the partnership — a play by Essie to reach Reddit's beauty-obsessed Gen Z audience — Essie will gift 200 participants with samplings of its Expressie polish, its first new franchise since 2017. It is the first beauty brand to sponsor RedditGifts.
"With the launch of Expressie, we’re targeting Gen Z and has a huge Gen Z audience," said Liz Hanigan, assistant vice president of integrated consumer communications at Essie. "We thought it would be an interesting way to test and learn."
Last year, RedditGifts had more than 75 exchanges. It saw 200,000 participants, one of whom was Bill Gates, who reportedly sent an 81-pound package to a user he was matched with in a Secret Santa group.
"It’s a wonderful way for people to exchange gifts with other people who are passionate about those topics and interests," said Roxy Young, vice president of marketing at Reddit. "It helps connect the world and make it feel a little bit smaller."
On March 16, Reddit will announce Essie's sponsorship of the Makeup Gift Exchange program on its r/redditgifts page. It will proceed to match users with their "secret Redditor" on March 30.
Reddit has more than 430 million monthly active users and has seen "tremendous growth" within its beauty communities, said Young. Nearly two-thirds of RedditGifts users are between the ages of 25 and 45, and 63 percent are women. Nearly half of Reddit users have actively purchased beauty products in the last six months and 31 percent of beauty enthusiasts are on the platform, according to ComScore.
WWD previously reported that Reddit saw a 63 percent year-over-year increase in subscribers in its top 50 beauty communities last year. Beauty blogger feuds drove a year-over-year subscriber increase of 87 percent to Beauty Guru Chatter, a popular Reddit community that discusses the goings-on of beauty vloggers. Reddit’s most popular beauty community of 2019 was Skincare Addiction, which surpassed one million subscribers.
More from WWD.com:
In 2019, Beauty Feuds Were Popular on Reddit, Too
Is Beauty Headed for a Social Media Shakeup in 2020?
The Internet Can't Get Enough of Vagina-Scented Products
Report: Nike and Adidas Reign Supreme at Influencer Marketing
Source: Read Full Article