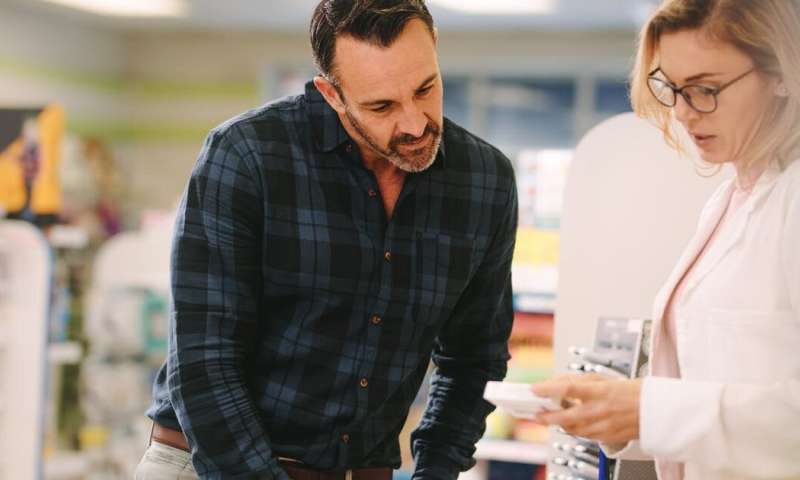 Prominent GP and former member of parliament Kerryn Phelps has entered the turf war between doctors and pharmacists over who gets to prescribe.

Pharmacy groups have long called for changes to allow pharmacists to prescribe specified medications, such as the oral contraceptive pill and antibiotics for urinary tract infections.

But Phelps argues allowing pharmacists to prescribe will lead to perverse incentives—where pharmacists prescribe inappropriately—because they have a financial interest in the sale of medicines.

Phelps has a point. Studies in countries where doctors have dispensing roles have found evidence of financial profits influencing prescribing behavior.

A Swiss study, for instance, found physician dispensing leads to a 34% increase in drug costs per patient, as doctors overprescribe and prescribe more expensive medications.

An evaluation of pharmacist prescribing in the United Kingdom found it was safe, clinically appropriate, and was generally viewed positively by patients.

Extending the scope of practice for pharmacists has the potential to lower costs to the health system because of fewer GP visits, be more convenient for consumers, and free up busy general practitioners to spend time on high-value care.

Supplier-induced demand arises from information asymmetry—when the consumer is reliant on information from the supplier in order to make a decision.

In health care, supplier-induced demand occurs when a health professional shifts the demand that a consumer has for a drug or medical service beyond what they would demand if the consumer had perfect information.

What Phelps is suggesting is that a pharmacist may manipulate a consumer into purchasing an unnecessary drug.

There is no reported evidence of inappropriate prescribing by pharmacists in any countries that have introduced regulated, controlled models of pharmacist prescribing.

The Royal Australian College of General Practitioners (RACGP) has argued that if pharmacists prescribe oral contraceptives, patients would miss valuable services they would have received during the consultation with the GP. RACGP Queensland Chair Dr. Bruce Willett told newsGP: “Limited repeats on medications such as oral contraceptives and cardiovascular disease medicines ensure patients can continue to be monitored by their GP while receiving treatments and medications, ensuring the right medication is prescribed at the right time.”

This reflects the economic concept of product bundling—where several products or services are sold in a single package.

The classic example is the bundling of newspapers with classified ads. These ads subsidized the newspaper’s journalism. But when online classifieds for cars and jobs began to compete with newspaper classifieds, newspapers lost the revenue that subsidized reporting and journalists lost their jobs.

Some medicines have an impact on not only the person taking the medicine but society more broadly. This is what economists call an externality—a cost or benefit that is borne by an individual who did not choose to take on that cost or benefit.

Antibiotic resistance due to overuse, for instance, is estimated to have a global burden of A$140 trillion.

The social cost of opioid addiction is another example. In the United States alone this cost was estimated to be over US$600 billion between 2015 and 2018.

When codeine was rescheduled as a prescription-only drug in Australia, there was a 50% reduction in sales and a significant reduction in codeine poisonings.

Conversely, a United Kingdom study of when antibiotic eye drops were rescheduled to be available over-the-counter found a doubling of sales.

Any increase in pharmacists’ scope of practice needs to be introduced with caution, with clear protocols and limited prescribing rights.

It also requires consideration of potential problems arising from increased availability, and robust monitoring and evaluation of the appropriateness and volume of prescriptions.