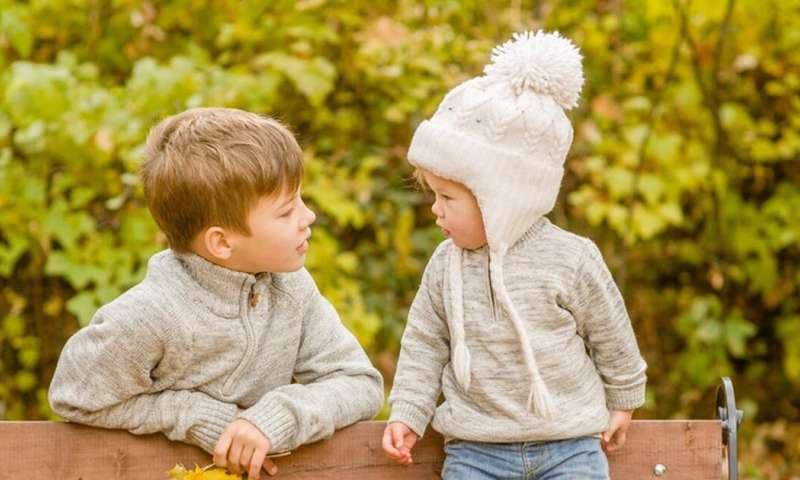 When you consider how children learn words, you might think of this kind of scenario: an adult points to an object (for example, a dog), clearly says a word in isolation (dog!), and the child immediately understands what the word means.

Almost everything about this scenario is wrong! The meaning of a word is not obvious. Most words occur in longer sentences without any spaces before or after them, which means that where a word begins or ends is not clear. And children work out the meanings of words over a longer period of time, rather than all at once.

In our Lab for Infant Development and Language at the University of Waterloo, our research has examined how toddlers deal with another complicated aspect of word learning: that of speech variability.

Speech variability refers to the fact that a word like dog is pronounced differently every time we hear it. Even a single person will say it differently each time —they could be talking faster or slower, whispering or yelling. With different speakers, the pronunciations can vary even more.

When adults listen to language, such variability is complicated enough to deal with. But imagine facing this situation as a baby or a young child whose language knowledge is still developing.

One group of speakers who pronounce words very differently is children. For example, when a young child says a word, like flower, it can be very different from the adult version —it might sound more like fowa.

With these substitutions and deletions of sounds, it’s not surprising that parents may understand their own children better than other adults do (since different kids might make different changes).

So can young learners recognize words produced by other children?

To see whether toddlers understand a word like flower, one technique is to show them pictures, say of a flower and a shoe, and then play a recording that asks them to look at the flower. If a toddler understands the word, that’s exactly what she’ll do.

Researchers have found that two-year-olds have difficulty understanding the speech of toddlers. In other words, when they hear a toddler pronounce fowa, they may not look at the correct picture. In fact, this is true even if they hear their own voice! This means that, even though toddlers themselves make mispronunciations, they aren’t very tolerant of them when listening to speech.

But in a study we did, we found that two-year-olds are extremely good at understanding the speech of children six years and older. They were just as fast and accurate as when they listened to adults.

This is neat, because even six-year-olds still produce sounds differently than adults. But toddlers had no trouble with these pronunciations. Interestingly, we found that this was true whether or not the toddlers had much previous experience with other children. One important implication of this is that even though most work on language development has focused on the input young learners get from adults, our results suggest toddlers might be able to use speech from other children to help them learn, too.

Noticing, and adapting, to accents

Hearing a child’s voice introduces one kind of variability. But what happens when a speaker has a different accent? For example, when a French-accented speaker says the English word pig, it might sound more to an English listener like the word big, because of how “p” and “b” sound in French and English.

Given the prevalence of different language backgrounds in Canada —for example, according to Statistics Canada 19.4 percent of Canadians speak more than one language at home and more than 7.7 million Canadians speak an immigrant mother tongue—this is a type of variability that many Canadian children will encounter.

Research suggests that toddlers aged 20 months and younger are sometimes unable to figure out what words mean when they first hear a new accent. For example, a study at the University of Toronto found that when Canadian monolingual English-learning toddlers heard the word dog in an Australian accent, they did not look at a picture of a dog —at least not the first time they heard it.

But in one study, we found that children can quickly learn about a new accent after just a couple of minutes of listening. In this research, toddlers aged 18—20 months heard words like ball produced with an accented vowel. After a couple of minutes of hearing the accented words paired with images of their meanings, toddlers were not only able to understand those particular accented words, they were also able to understand other words in that accent (even if they hadn’t heard them before).

How do we know they learned the specific accent instead of just becoming more tolerant of vowel changes? If we instead presented the words with a different vowel after the learning period, toddlers rejected those pronunciations.

In fact, we have found that even babies can remember the specific accents used by two different people.

Cheap haldol next day without prescription