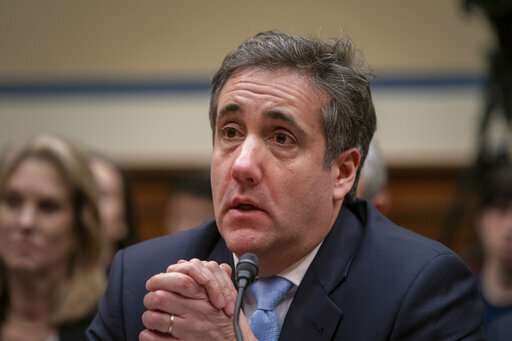 We tend to believe informants like Michael Cohen, studies show and psychologists say.

It doesn’t matter if the person is behind bars or has confessed to lying, as Cohen has: Juries usually believe an informant, said Jeffrey Neuschatz, a University of Alabama psychologist who has studied jailhouse informants’ testimony for a decade.

Cohen, President Donald Trump’s former lawyer, pleaded guilty last year to lying to Congress. On Wednesday, he gave harsh testimony about Trump to a U.S. House committee, where he found a receptive audience from Democrats and drew the ire of Republicans who labeled him a felon and a liar. Trump, who had earlier called Cohen a “Rat” on Twitter, slammed the testimony as “fake.”

Neuschatz said Cohen fits in with the informants he has studied. And “people almost reflexively believe confessions. In the case of Cohen, he’s given a sort of confession here,” Neuschatz said.

“I think he came across as very credible, whether he is or not,” he added.

The theory is that people tend to believe others—called “a truth bias”—unless they are given a reason not to, he said.

Jurors sometimes even disregard their own biases, Neuschatz said.

He did studies with mock jurors who said they wouldn’t trust informants who repeatedly testify against defendants. The jurors were told the informants had testified as many as 20 times, and the panelists usually believed their testimony. Another of his mock jury tests showed convictions jumped from 30 percent to 62 percent with the addition of a jailhouse informant.

Informants “acknowledge that they have done misdeeds and say ‘now you should believe me.’ That seems to me what Cohen did,” Neuschatz said. And then people think “no one would be admitting to doing something they didn’t do, so they must be telling the truth,” Neuschatz said.

In court, when jurors think an informant has little to gain or even is hurt by coming forward, they are more likely to believe the person, the experts said.

That’s why University of Massachusetts psychology professor Robert Feldman, who has studied everyday lying for 30 years, said he believes Cohen: “He doesn’t have much to gain by lying,” he said. He said when he evaluates people, his key question is: “What would the lie get you?”

Cohen has already been sentenced to three years in prison, though he could have it reduced later at the request of prosecutors because of cooperation.