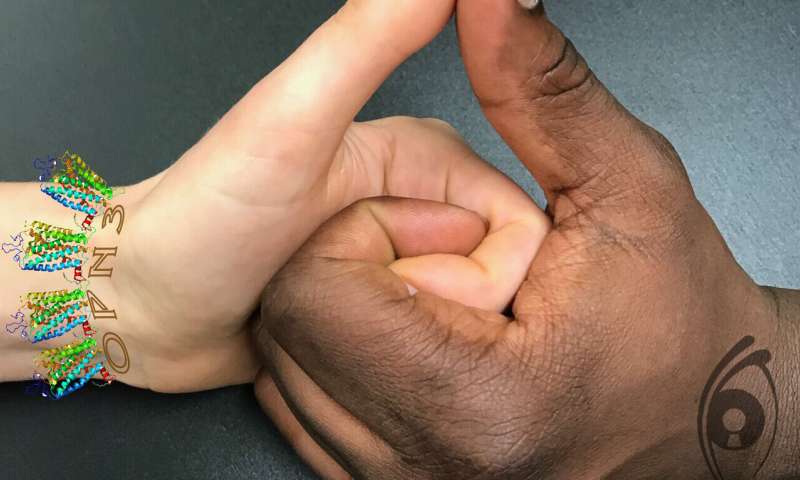 A team of Brown University researchers found that opsin 3—a protein closely related to rhodopsin, the protein that enables low-light vision—has a role in adjusting the amount of pigment produced in human skin, a determinant of skin color.

When humans spend time in the sun without proper skin protection, the sun’s ultraviolet (UV) radiation signals the skin to produce more melanin—which protects against the cancer-causing effects of the radiation—and become darker. There are two parts to solar UV radiation: short wavelength radiation or UVB, and long wavelength radiation or UVA. Each part is detected by the skin in different ways; how UVB makes humans tan has been known for a while.

On the other hand, scientists know less about how skin detects and responds to UVA, the more abundant kind of solar UV radiation.Elena Oancea, an associate professor in the department of Molecular Pharmacology, Physiology and Biotechnology at Brown, has been studying precisely this question. In 2015, when her team uncovered the first clues to indicate that melanocytes, specialized skin cells that produce the pigment melanin, have an abundance of opsin 3, they thought that opsin 3 might be the receptor thatdetects UVA and signals increased melanin production.

Four years and four major surprises later, the team’s findings were published on Thursday, May 16, in the journal Proceedings of the National Academy of Sciences.

“We’ve found the role of opsin 3 in human melanocytes and figured out the molecular steps that allow opsin 3 to achieve this function,” Oancea said. “Opsin 3 modulates how much pigment the cells make, but, surprisingly, it does so independent of light. This mechanism is a new paradigm for opsins. Once we learn more about opsin 3, it may be a good target for treating pigmentation disorders.”

Armed with their initial hypothesis that opsin 3 detects UVA radiation, causing calcium ions to flood the melanocytes and triggering melanin production, the team jumped into experiments. Rana Ozdeslik, a doctoral student who earned her Ph.D. from Brown in 2017 and continued work on the project as a research associate, used a genetic engineering tool to greatly reduce the amount of opsin 3 in cultured human melanocytes.

When Ozdeslik exposed the skin cells with almost no opsin 3 to UV light, they still produced a burst of calcium ions. Their initial hypothesis was wrong.

“Our first big surprise was that opsin 3 is not the UVA detector,” Oancea said.

As the team planned next steps, Ozdeslik observed that the skin cells without opsin 3 appeared much darker, Oancea said. This was the second surprise. Indeed, when they measured melanin, the melanocytes made more pigment in the absence of opsin 3. The next step was to figure out how.

At that point in the research process, Brown doctoral student Lauren Olinski joined the team. Together, they found that opsin 3 changes the activity of the melanocortin-1 receptor, a protein known to increase synthesis of cyclic adenosine monophosphate (cAMP), a molecular signal that triggers melanin production. Opsin 3 regulates melanin by decreasing the levels of cAMP produced by the melanocortin-1 receptor. This was the third surprise of the project.

The team determined that, as expected, opsin 3 binds retinal, a form of vitamin A that is essential for sensing light in all rhodopsin-related proteins. However, they could not detect opsin 3 absorbing any wavelength of light. This was their fourth surprise and one that Oancea still finds quite puzzling. She said it is possible that the retinal serves some kind of structural purpose or that opsin 3 absorbs light in a wavelength range that cannot be easily measured.

Ultimately, the team determined that opsin 3 decreases melanin production in skin cells by decreasing the levels of an important molecular signal—but that this regulation does not seem to be triggered by light.

Now that they have determined opsin 3’s role in skin pigmentation, the team is seeking to learn in what other parts of the body opsin 3 is produced and what kind of functions it might have. Olinski is working to determine where and how opsin 3 works in the brain, where it was first discovered.