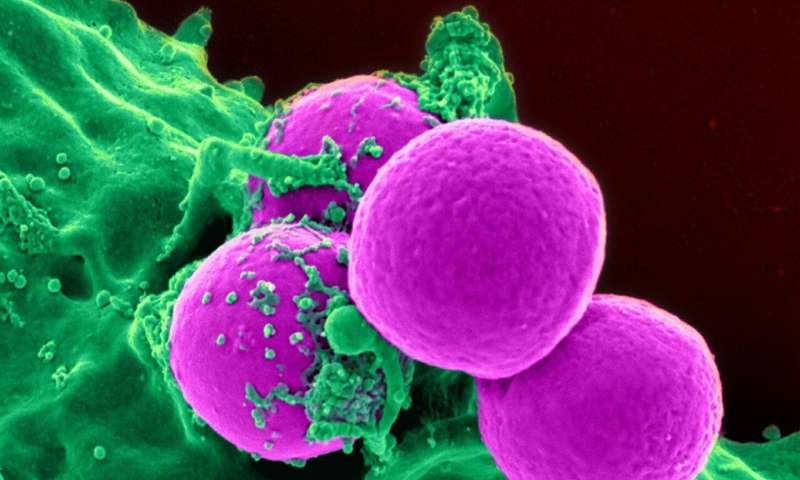 Eradicating deadly staph using a new breed of antibiotics has revealed promising results in research released by QUT, to help overcome one of the biggest modern medical challenges.

The bacteria attach to medical devices including catheters, artificial joints, implants and patients’ burns and wounds, establishing bacterial biofilms, a leading cause of failing antibiotic therapies and chronic infections.

“We have developed a new breed of antibiotic that tricks biofilms into releasing their protected cells allowing access through the protective slimy coating of the biofilm.

“This allows for the biofilms to be eradicated.”

The Ph.D. student and a recipient of a medal for his QUT Applied Science honours degree in chemistry described the new antibiotics as “clever drugs for slimy bugs”.

He said the microscopic compound emits a fluorescence signal enabling researchers to watch the drug penetrating the biofilm, either killing the bacteria directly or leaving them susceptible to killing.

Associate Professor Totsika said the majority of infections, even those not associated with an implanted medical device, involve biofilms in some way so the potential for these drugs is wide.

“We are now gearing up to do pre-clinical testing,” she said.

“What is promising is the fact that our compounds are hybrids of drugs that are already in clinical use as stand-alone therapies, such as conventional antibiotics and nitroxides, so this offers hope that they could be translated into clinical therapies in the not so distant future.”

Hospital acquired infections and increasing resistance to antibiotics has challenged medical researchers to find and test novel antimicrobial agents, including alternatives to antibiotics.

The World Health Organisation has identified antibiotic resistant pathogens as one of the “biggest threats to global health today”.

Associate Professor Totsika said there was scope to apply the research beyond medicine, to agriculture, biotechnology and other industries.

She is the recipient of a QUT Vice-Chancellor’s Research Fellowship, and her research is supported by grants from the National Health and Medical Research Council and the Australian Research Council.