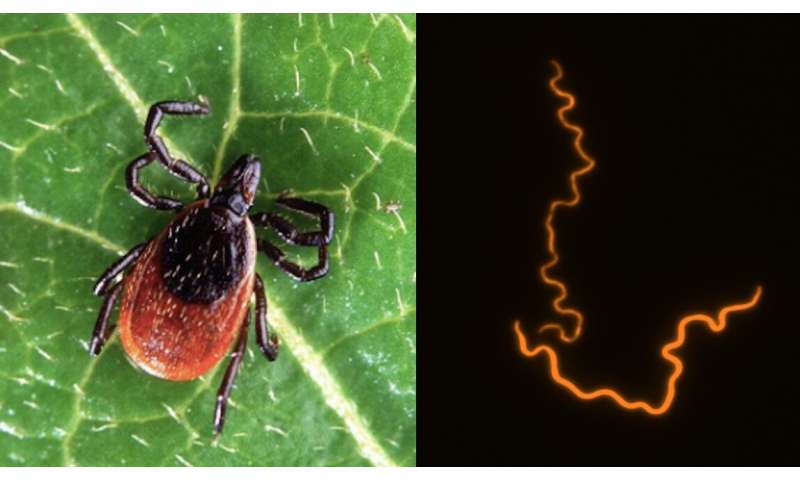 Virginia Tech biochemist Brandon Jutras has discovered the cellular component that contributes to Lyme arthritis, a debilitating and extremely painful condition that is the most common late stage symptom of Lyme disease.

Jutras found that as the Lyme-causing bacteria Borrelia burgdorferi multiplies, it sheds a cellular component called peptidoglycan that elicits a unique inflammatory response in the body.

“This discovery will help researchers improve diagnostic tests and may lead to new treatment options for patients suffering with Lyme arthritis,” said Jutras, the lead author on the study. “This is an important finding, and we think that it has major implications for many manifestations of Lyme disease, not just Lyme arthritis.”

Reported incidences of Lyme disease, the most reported vector-borne disease in the country, have increased by more than 6,000 percent in the past 15 years in the state of Virginia. The Centers for Disease Control estimates that approximately 300,000 people are diagnosed with Lyme disease annually in the United States. Scientists predict that the number of people who become infected with Lyme will increase as our climate continues to change.

Jutras—an assistant professor of biochemistry in the College of Agriculture and Life Sciences and an affiliated faculty member of the Fralin Life Sciences Institute—and his collaborators recently published their findings in the Proceedings of the National Academy of Sciences.

The PNAS paper was four years in the making, and Jutras began this research during his post-doctoral fellowship in the lab of Christine Jacobs-Wagner, a Howard Hughes Medical Institute Investigator and professor at Yale University.

“Nowadays, nothing significant in science is accomplished without collaboration,” Jutras said. Co-authors on this paper ranged from bench scientists to medical doctors and practicing physicians. Allen Steere, a Harvard doctor who originally identified Lyme disease in the 1970s, assisted Jutras with his research and provided access to patient samples.

This research may provide a new way to diagnose Lyme disease and Lyme arthritis for patients with vague symptoms based on the presence of the cellular component called peptidoglycan in synovial fluid.

The team found peptidoglycan is a major contributor to Lyme arthritis in late-stage Lyme disease patients. Peptidoglycan is an essential component of bacterial cell walls. All bacteria have some form of peptidoglycan, but the form found in the bacteria that causes Lyme, Borrelia burgdorferi, has a unique chemical structure. When the bacteria multiply, they shed peptidoglycan into the extracellular environment, because its genome does not have the appropriate proteins to recycle it back into the cell.

“We can actually detect peptidoglycan in the synovial fluid of the affected, inflamed joints of patients that have all the symptoms of Lyme arthritis but no longer have an obvious, active infection,” Jutras said.

Peptidoglycan elicits an inflammatory response and the molecule persists in the synovial fluid, which means that our bodies continue to respond, without mounting a counter response.

Receptors in our immune system sense bacterial products and, depending on the individual’s genetic predispositions, may determine how strongly a patient’s body reacts to peptidoglycan.

The next phase of Jutras’ work is to use methods to destroy the peptidoglycan, or intervene to prevent a response, which could get rid of Lyme disease symptoms. Jutras predicts that with either therapy patients would start recovering sooner.

Clinical samples included in this study were obtained from patients that had confirmed cases of Lyme disease under the guidelines of the CDC, but virtually all did not respond to oral and/or intravenous antibiotic treatment. The presence of peptidoglycan in these patients’ synovial fluids may explain why some people experience symptoms of late stage Lyme disease in the absence of an obvious infection. In this case, the usual antibiotic treatments for Lyme disease would no longer be helpful, but this discovery might provide avenues for new treatments.

Members of the Jacobs-Wagner lab purified the peptidoglycan and removed all other bacterial components and asked: Is peptidoglycan all on its own capable of causing arthritis in a mouse model?

Within 24 hours post-injection, mice presented with dramatic joint inflammation, indicating that peptidoglycan can cause arthritis.

Jutras is continuing his research at Virginia Tech on peptidoglycan by more thoroughly studying its chemical composition to determine how it is able to persist in the human body. This will also help further the understanding of how this bacterial product contributes to other manifestations of Lyme disease.

Switching from wellbutrin to celexa

Switching from wellbutrin to celexa

Cheap lexapro from india without prescription